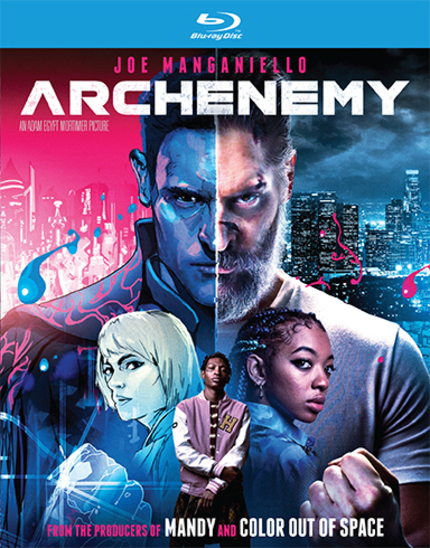 This should be a popular one. RLJE Films is releasing Adam Egypt Mortimor’s cosmic adventure flick Archenemy on DVD and Blu-ray on February 16th, so that means it’s giveaway time! We have three (3) Blu-ray copies of Mortimor’s latest flick to give away to three lucky readers in the U.S.

Starring the man stole the Hand of Vecna (apparently this was a big deal) Joe Manganiello, Archenemy was not on the festival circuit very long but our own Josh managed to catch the film when it had its world premiere at Beyond Fest in October. You can read his full review here, but here is a snippet to whet your appetite.

While broad comparisons could be made to recent indie vigilante films like Matthew Vaughn’s Kick-Ass, or more closely James Gunn’s Super, Archenemy maintains its own unique identity through a clever compositing of genre tropes and the director’s unique vision…. Archenemy is one of the most original films of the year and a thrilling cosmic adventure with plenty of violence and a big heart. Definitely one to look out for.

RLJE Films, a business unit of AMC Networks, will release ARCHENEMY on February 16, 2021 on DVD and Blu-ray.

In ARCHENEMY, Max Fist (Joe Manganiello) is a local drunk who claims to be a superhero from the planet Chromium. He tells anyone who will listen that he was pulled into a wormhole, falling through time and space, and dropped to earth without any of his powers. No one pays any attention to Max except a teenager named Hamster (Skylan Brooks) who can’t get enough of Max’s stories. When Hamster and his sister (Zolee Griggs) get in trouble with a vicious drug syndicate led by The Manager (Glenn Howerton), Max takes to the streets as a brutal vigilante hellbent on proving himself as the hero no one believes him to be.

Ready to enter the giveaway? To enter is simple. You must be a resident of the U.S. and entries are limited to one per household. Answer our fact finding question below and email us here when you have the answer.

Got it? Great. Email us here with your answer. Good luck to all who enter.

‘Slash Film: ‘Star Wars: The High Republic – Into the Dark’ Brings a Terrifying New Villain Into the Galaxy Far, Far Away’