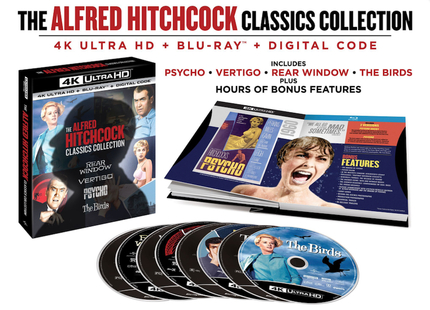 The Alfred Hitchcock Classics Collection from Universal Pictures Home Entertainment was released this month in a 4K UHD and Blu-ray combo package, and it’s simply stunning. This review is for the Blu-ray discs, as I don’t yet have a system that can play UHD.

The master of suspense has long been celebrated throughout film history, but this collection really drives his excellence in cinema home. What an absolute delight it was to revisit the films in this release: Rear Window, Vertigo, Psycho, and The Birds.

The restorations for all Blu-ray discs are absolutely gorgeous. I’ve read that the UHD versions are even sharper, which blows my mind. Blu-ray sound is also stellar.

Instead of trying to best film scholars that have written about Hitchcock’s masterpieces, I’ll just say that rewatching each of these classics remains a wonderful experience, even more so than when I originally saw them in high school.

In fact, watching them now, I see how much depth, care, story, and technical skill are involved in each. Every film is almost a film school in its own, particularly when watched with the commentaries and the featurettes. If you know someone who can’t afford actual film school (and in these COVID times, why bother), this set would be a seriously lovely gift for the holidays or any day.

You’ll marvel at the colors, obsession, and twist in Vertigo, marvel at the story, acting, and filmmaking craft in Rear Window, and be captivated at the terrors both made by man and nature in Psycho and The Birds.

It’s also worth nothing that Psycho is uncut here, adding in an important opening that establishes Janet Leigh’s character Marion’s motivation for stealing the money — thus setting off the chain of events that leads us to Norman Bates’ (Anthony Perkins) demented world.

It’s such a beautiful set, filled with hours of captivating filmmaking glee. The bonus features alone, ported over from previous releases, are quite worthwhile.

The extras for each film are below; in the meantime, head over to Universal’s site here for more info and where to buy, such as Amazon, Best Buy, etc.

• Hitchcock / Truffaut Interview Excerpts – In 1962, filmmaker François Truffaut, aided by his translator and associate, Helen G. Scott, spent numerous hours interviewing Alfred Hitchcock for his book, “Hitchcock.” The audio recording of those interviews provides the soundtrack to this montage of film clips and stills, giving audiences a deeper insight into one of Alfred Hitchcock’s masterpieces. (14:17)

• Feature Commentary with Stephen Rebello, author of “Alfred Hitchcock and The Making of Psycho”
• The Making of Psycho
• Psycho Sound
• In The Master’s Shadow: Hitchcock’s Legacy
• Hitchcock/Truffaut – “In 1962, filmmaker François Truffaut, aided by his translator and associate, Helen G. Scott, spent numerous hours interviewing Alfred Hitchcock for his book, “Hitchcock”. The audio recording of those interviews provides the soundtrack to this montage of film clips and stills, giving audiences a deeper insight into one of Alfred Hitchcock’s masterpieces.
• Newsreel Footage: The Release of Psycho
• The Shower Scene: with and without Music
• The Shower Sequence: Storyboards by Saul Bass
• The Psycho Archives
• Posters and Psycho Ads
• Lobby Cards
• Behind-the-Scenes Photographs
• Production Photographs
• Psycho Theatrical Trailers
• Psycho Re-release Trailer

All serious daring starts from within.