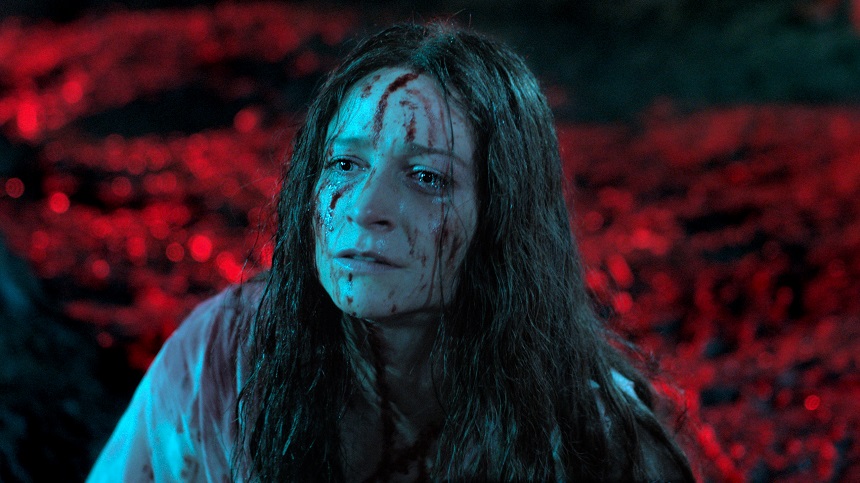 When film censor Enid (Niamh Algar) discovers an eerie horror that speaks directly to her sister’s mysterious disappearance, she resolves to unravel the puzzle behind the film and its enigmatic director – a quest that will blur the lines between fiction and reality in terrifying ways.

Censor expands on an idea she explored in her 2015 short film Nasty. Baily-Bond has said in interviews she was first intrigued by an article from a horror magazine about censors working in the Hammer Horror era. If horror films are such a bad influence then what happens to film censors who have to watch all these horrible acts first?

Magnolia has plans for a June 11th release. The full press release follows. You can also read Eric’s review from Sundance here.

Magnolia Pictures, announced today that they have acquired North American rights to CENSOR, which had its World Premiere at Sundance Film Festival opening the Midnight Section and will also be part of the Berlinale Panorama section in March. The film is the debut feature by Prano Bailey-Bond and stars Niamh Algar (Calm With Horses, “Raised by Wolves”). Magnolia Pictures is targeting June 11 release date.

When film censor Enid (Algar) discovers an eerie horror that speaks directly to her sister’s mysterious disappearance, she resolves to unravel the puzzle behind the film and its enigmatic director – a quest that will blur the lines between fiction and reality in terrifying ways.

Vanity Fair includes CENSOR as one of the best films of Sundance 2021, The Playlist calls it “an impressive, visually stunning, deeply disturbing debut from filmmaker Prano Bailey-Bond” and Indiewire states “the movie shows the mark of a filmmaker in full command of vintage horror’s most disturbing strengths and well-equipped to resurrect them.”

“Prano Bailey-Bond has delivered a frightening, incredibly original film,” says Eamonn Bowles, Magnolia President. “It is a rare work that has a lot on its mind as well as being genuinely terrifying.”

“Magnolia Pictures champion exactly the unique, powerful cinema that I love, releasing titles that have truly resonated with me: The Square, Let The Right One In, Shoplifters, Tangerine… for Censor to have found a home on this remarkable slate is amazing!” says Bailey-Bond. “I’m so excited to be working with Magnolia and can’t wait to bring the film to audiences in North America!”

The deal was negotiated by Magnolia EVP Dori Begley and Magnolia SVP of Acquisitions John Von Thaden with George Hamilton, Head of Sales at Protagonist, on behalf of the filmmakers.

Says Hamilton, “Prano is one of the most original UK filmmaking voices of this new decade and we cannot wait for Magnolia to unleash CENSOR on North American audiences.”