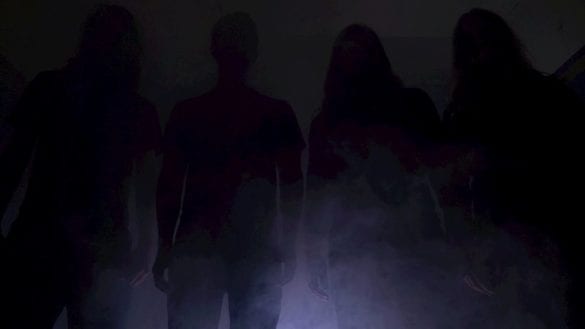 Check out now “Inversion” below.

“We’re really excited to finally unveil our debut full length! We obviously wear our influences on our sleeves but I think that over the course of the past two years from ‘Consumed by Oblivion’ to now we’ve been able to refine our sound and key in on what makes us unique. We always try to grow as musicians from release to release so it’s great to be able to put forth a definitive ‘this is Void Rot’ and use that as a foundation. The album itself is sort of a concept album, bookended by two massive songs, and ‘Inversion’ is sort of the culmination of the ‘meat’ in the middle. It starts right in and ends in a very ominous manner. The song was actually titled ‘Inversion’ since it takes one of the main riffs from ‘Descending Pillar’ and reverses the riff – so instead of the notes going downward, ‘Inversion’ ends with that riff going upwards. That sort of ascending pattern makes listeners look towards the sky for salvation, but alas the ominous way in which it finishes suggests otherwise.”

To free us from the expectations of others, to give us back to ourselves — there lies the great, singular power of self-respect.