Hatebreed Uploads Trailer For New Album “Weight Of The False Self” 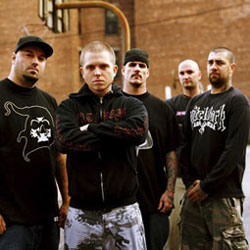 Bridgeport, Connecticut metal/hardcore band Hatebreed has uploaded a new trailer for their new album, “Weight Of The False Self,” which will be released through Nuclear Blast on November 27th.

The band has shared a new album trailer, in which singer Jamey Jasta and guitarist Wayne Lozinak discuss the process of working with producer Zeuss, and the unique sounds that were captured on the record. You will also learn exactly what “bitch ears” are.

“Weight of the False Self” arrives on the heels of the sold-out anniversary shows that Hatebreed embarked upon throughout 2019 and the unprecedented success of 2016’s “The Concrete Confessional.” Not only did the latter tally over 42 million Spotify streams, but the single “Looking Down The Barrel of Today” also clocked 30 million-plus Spotify streams. Over 20 years deep into its career, this Connecticut hardcore metal institution remains as vital as ever.

Hatebreed Uploads Trailer For New Album “Weight Of The False Self”