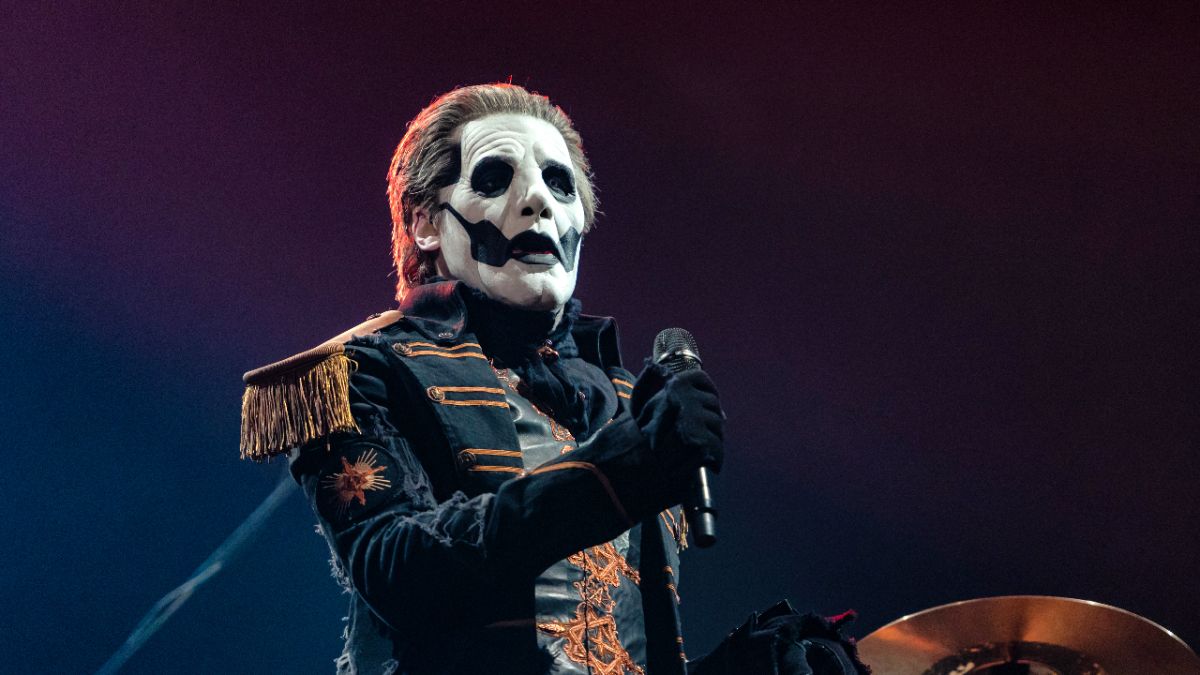 There is one undeniable ‘passing the torch’ moment between the two Hellfest main stages on Saturday evening. While the crowd are waiting for Tobias Forge and his crew to headline the festival’s second night, Deep Purple are closing their set by resurrecting their very first hit from 1967, Hush. It’s mixed into a medley with other classics from that era, including Gimme Some Lovin’, and Dazed & Confused. It’s a celebratory experience, but it makes you realise that you’re also honouring classic rock’s long-gone golden years. The past is alive, but for how long? We need to make sure there’s a future for arena rock/metal, and who’s more qualified than Ghost? Love them or hate them, tonight they once again prove that as far as getting the Satanic party going in front of 60,000 people, they’ve become untouchable.

Ghost are no strangers to Hellfest – this is their fourth appearance and their third on the main stage – nor are they strangers to the last-minute-announcement-turned-into-triumph effect. In 2013, when Danzig demanded to play earlier just a couple of hours before their headlining slot, Papa and the Nameless Ghouls stepped in and saved the day. So even if Ghost were announced only two months ago as a deluxe replacement for Faith No More, they seize the occasion, and not even an abbreviated set can derail them.

Having completed a full European tour just a few weeks ago, they’re rumoured to have spent a full week in nearby Nantes prior to this gig, just to make sure everything is spot-on. After all, Ghost are an extremely well-oiled, unshakeable machine thanks to their expanded line-up – there are now eight musicians in the live squad, including two backing vocalists and a keyboard player. It means that, tonight, there’s always something happening on stage, even little interludes allowing Papa Emeritus IV to switch costumes, each proving more flamboyant.

The Ghouls’ new ‘Satanic steampunk’ look, meanwhile, gives the backing band a more menacing yet strangely seductive edge. Starting off once again with Kaisarion, the setlist is similar to the Imperatour shows, with good omissions (they’ve ditched their Enter Sandman cover, thank you) and bad (why do they only play Year Zero from second album, Infestissumam?).

Amongst the latest Nameless Ghoul recruits are Sisters Of Mercy live session member Chris Catalyst, and former Bloodbath/Katatonia member Per ‘Sodomizer’ Eriksson; both guitarists give a harder, more menacing edge to the five songs taken from Impera (including a live premiere of Griftwood). Amongst those, Call Me Little Sunshine gets the most ravenous response and only a few notice the first cracks in Tobias’s voice during He Is. But the show must go on, and it does, with panache. It’s only towards the end of Dance Macabre, as the crowd is getting smothered in confetti, that Tobias bluntly says that this is it for him, and that his voice won’t allow him to sing one last song – the unbeatable and usual night-closer Square Hammer.

It all happens so fast and so in the flow of Ghost’s otherwise faultless production that it almost feels like a part of the show that they instantly get away with it. That’s the kind of magic only worthy headliners can pull off, and tonight, Ghost once again have earned their stripes.

Louder Sound – Ghost at Hellfest: more menacing and seductive than ever, despite the early finish
Author:
Go to Source
June 21, 2022

Doomed Nation – Worship at the psychedelic altar of doom trio Black Capricorn! Watch a music video for »Giants Of Prama«!