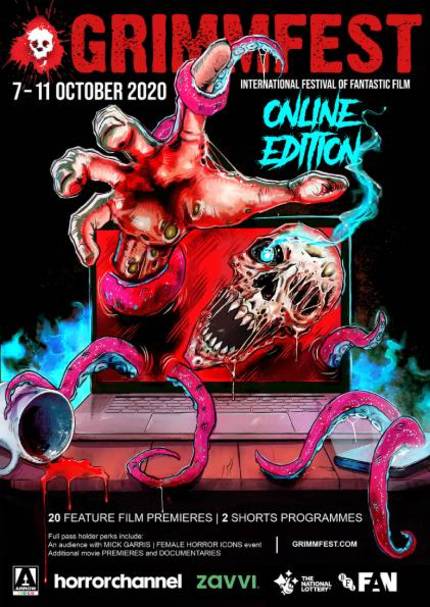 Grimmfest in Manchester, UK, has wrapped up its online version last week. Opting to go online in wake of the global health crisis the festival was able to reach a wider audience than ever, hosting their festival on the Eventive platform. And like others who moved online the festival was also able to host not only screenings but virtual Q&A’s and special events, proving where

José Luis Montesinos’ Ropes and John Stevenson’s Rent-A-Pal took home a couple Reapers and the rest of the awards were spread out evenly among the lineup.

The complete list of all the winners is below in the press release.

This year, GRIMMFEST, Manchester’s Festival of Horror, Cult and Fantastic Film, celebrated its twelfth anniversary in rather different circumstances. After the ongoing Pandemic situation necessitated a move online, the festival staged a successful five-day invasion of homes across the UK and Northern Ireland (7-11 Oct), reaching a wider audience than ever before, while offering a variety of the strongest, most challenging, thought-provoking and boundary-pushing genre films of 2020.

And now the festival has closed, Grimmfest announce the annual ‘Reaper’ award winners.

Now the Festival Jury’s votes are all in, the Grimmfest team would like to thank the jury for their commitment, discernment and diplomacy.

Grimmfest is delighted to announce the winners in each category:

There was much praise this year for ensemble players and films in which it was impossible to single out one performance, among a cast working so well together. Special mentions for THE OAK ROOM, 12 HOUR SHIFT, UNEARTHED, TRIGGERED, REVENGE RIDE, and THE DEEP ONES.

With special mention for BEAUTY JUICE and THE ALTURIST.

Festival director Simeon Halligan said: “It’s certainly been a challenging year for everyone. We didn’t take our decision to move Grimmfest 2020 online, lightly. But in light of the current situation in the UK and around the world we think we made the right choice. The Grimmfest team worked incredibly hard to make this online offering as engaging and interactive as possible, so as to create something akin to the live event. We are pleased that the horror film community and fans whole heartedly embraced the event and we congratulate all the award-winning films and film makers.”