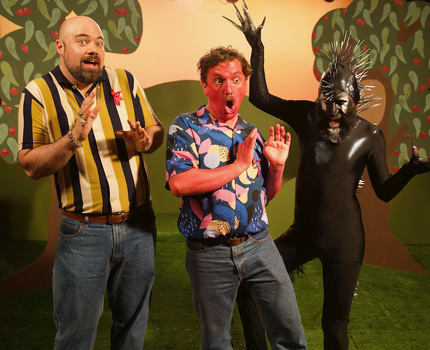 We’ve been huge fans of Aussie comedian Aaron McCann ever since he wrote, directed and starred as one half of Henry & Aaron in a series of hilarious comedy shorts dating back more than a decade. Since then he has co-directed the brilliant mockumentary Top Knot Detective, and now helms a surreal new comedy web series, Hug the Sun, funded by Screen Australia and Screenwest & Lottery West.

The brainchild of comedians and stars Xavier Michelides and Ben Russell, Hug the Sun spoofs the beloved religious and educational  children’s programming of our youth, while taking a darkly subversive twist into the warm, welcoming arms of pagan idolatry.

To quote the press release:

“The Children’s TV show ‘Hug the Sun’ ran between 1989-1991. It was designed to teach Australian kids about the teaching of Oxtos (an esoteric, fringe religion that worshiped the great sun god). However, on February 23rd 1991, the show disappeared from the airwaves… until now.”

“It was a huge challenge to undertake a film shoot…during the height of a global pandemic after our states just came out of COVID lockdowns,” says McCann, “and over the ‘blistering’ speeds of our current NBN. With the help of continued support from Screen Australia and Screenwest and all of our tireless cast and crew, we were able to rise to the occasion to create this chaotic, comedic love letter to 90s community broadcasting.”

The six-episode web series launches later this week, with the first episode available RIGHT HERE from 9am on Thursday, 6 May AEST (that’s 7PM on May 5th EDT). For a taste of the decidedly strange things in store, check out the show’s trailer below. Oxtos is upon you!

Daniel Kaluuya’s A+ Oscar Speech Touched On Fred Hampton’s Legacy, Also His Own Parents Having Sex