The fight for the rights to the Friday the 13th franchise has been resolved, but only litigiously. There’s still the matter of the hockey mask and believe it or not that iconic prop could halt any future movies starring Jason Voorhees as we know him.

In what seems to be a bitter personal battle between Victor Miller and Sean S. Cunningham — Miller wrote the original 1980 script while Cunningham produced and directed the film adaptation — Jason Voorhees may drown in technicalities rather than Camp Crystal Lake.

The trouble started brewing when Miller wanted the rights to his script once the copyright expired a few years back. A judge awarded Miller those rights. But there is a snag, and it all started with Friday the 13th Part III.

Remember the portly young man named Shelly (Larry Zerner) in that movie? He was a prankster with serious self-esteem issues. In his death scene, he’s wearing a hockey mask which Jason appropriates and thus the icon was born. 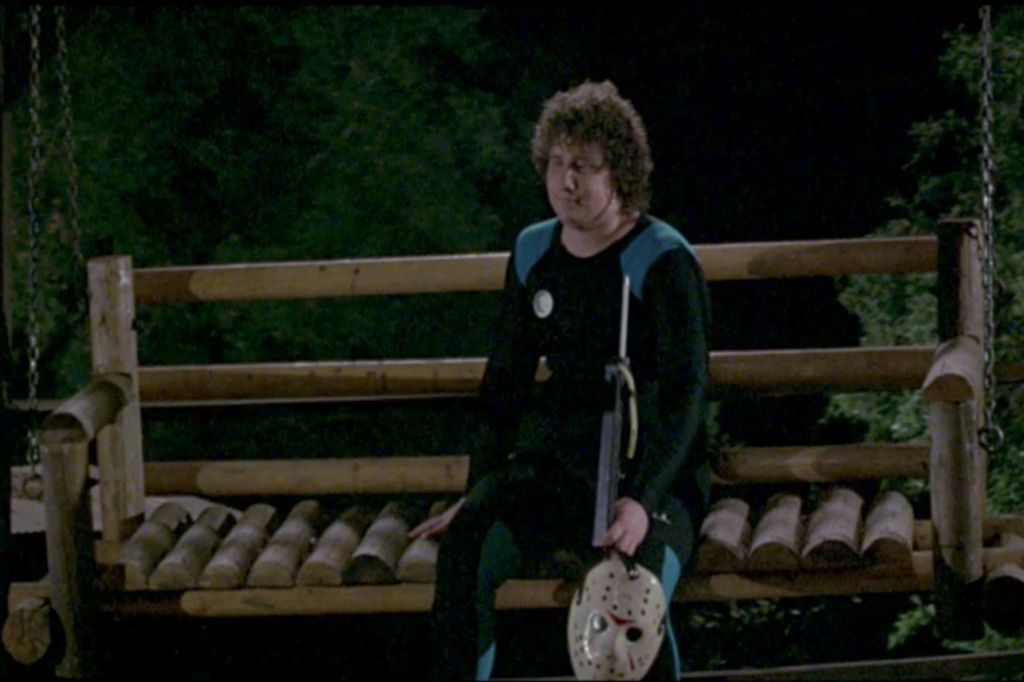 Larry Zerner as Shelly in Friday the 13th Part III

Zerner has since become an entertainment lawyer and it’s no surprise the Miller vs. Cunningham case is one he follows closely.

The good news is they might. The bad news is it might not be exactly what people are expecting.

Remember, Miller won the rights to the original script, in which (spoiler alert) Jason’s mom (Betsy Palmer) is the killer.

Enter some complicated copyright laws from 1976 and it was concluded that Miller can move forward with his characters.

“Now we can license a remake, prequel or even sequel motion pictures… provided such films do not use any additional copyrightable elements” said Marc Toberoff, a copyright attorney representing Miller.

Not so fast. Miller only owns the intellectual properties of the first film, but not the title. Nor does he own rights to the original sequels, their characters (including the adult Jason), or anything past part one. Cunningham got custody of the hockey mask too.

“Miller now owns the copyright to his screenplay, including sequel rights, but Jason can’t be portrayed as any older than in the first movie? Makes no sense,” Toberoff said. “Jason was very much a presence in Miller’s film. In fact, Mrs. Voorhees channeled Jason. And, of course, the first was all teed up for sequels.”

To sum it up, Miller can’t make a movie beyond his original 1980 characters, and if he does, he can only make Jason 11-years-old. But Cunningham can’t use Jason’s name without Miller’s permission.

What’s more, Cunningham owns the foreign rights to Friday the 13th so even if Miller decides to make a movie, it can only be distributed in the U.S.

It’s rare a studio exec would green-light such a hot movie commodity without having worldwide rights.

Thanks to an agreement made in 1979 between Miller and Cunningham, Miller might be privy to some worldwide rights, but that stake is undetermined.

“We can license television series, exploring Crystal Lake and how Jason became who he is – think ‘Twin Peaks’ or ‘Bates Motel,’” Toberoff told CNN.

According to Toberoff, Cunningham made millions from “Friday the 13,” but Miller, “got bupkis.”

At this point, one might question how the Marcus Nispel 2009 remake got made with Cunningham and Miller and at each other’s throats. It appears that the two had some sort of armistice at the time because Miller filed the copyright lawsuit in 2016. But there was still some drama over Nispel’s movie. The film was labeled as a “sequel” at the beginning which meant Miller would get less money since it wasn’t an outright remake of his original idea. However, Miller said the script he read at the time resembled a remake, not a sequel. The film did include Miller’s concept, but it was reduced to a small cold open. He took legal action and lost. The film went on and, surprisingly, the marketing department pushed it as a remake anyway.

With the requel and reboot trend currently hitting Hollywood, the potential for a Jason movie being a cash cow is not in doubt. The question is, when will it happen?

The bottom line is, would fans rather see Jason as an 11-year-old disfigured child or the hockey mask-wearing behemoth we are all used to? Let us know what you think in the comments.

iHorror – Jason Mask Controversy: Will He Have One? Filmmakers Clash
Author: Timothy Rawles
Go to Source
May 13, 2022