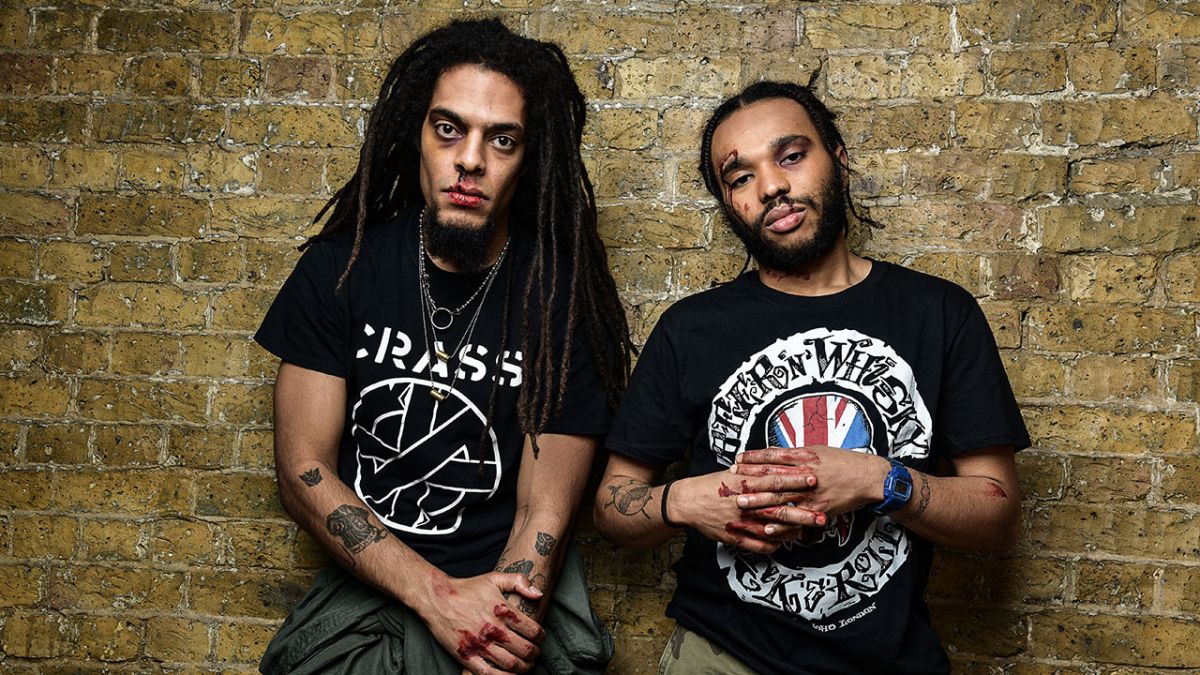 Whenever you ask Bobby Vylan an important question, he pauses before carefully articulating his answer. A man brought up on the words of Akala, the movies of Spike Lee and the stories of large, diverse communities, he understands the weight of his words and wants to make them impactful.

Bobby fronts UK-punk grime duo Bob Vylan, and he’s written an album so honest and extreme that the industry didn’t want to touch it.

Full of fury and animosity, Bob Vylan’s debut album We Live Here combines the traditions of punk with the modern voice of British grime. In the spirit of both genres, it doesn’t hold back with its messaging. The album forces some of the UK’s uglier realities into a harsh spotlight, including police brutality, the racism – both institutional and personal – faced by Britain’s communities of colour, and the government’s poor treatment of the working classes. Sharing its scope and ambition with the likes of Grey Britain by Gallows and the works of Letlive., it’s a landmark record that tears down the country that birthed it, and prompts essential discussion around the fact that for plenty of its inhabitants, Great Britain isn’t so great at all.

The duo knew they had something special with We Live Here, so when labels deemed them too ‘extreme’, they carved their own path. “It was hard to get it released the conventional way,” Vylan tells Louder. “But it was always in our power to release it.”

We Live Here is primarily available through Bandcamp and record shops – or, via mediums that encourage adequate payment and thus, it could be argued, place more value on the subject matter. That becomes more important when that subject matter is so bitterly personal. “These are the stories of my life – whether it’s present or once upon a time – or other people’s lives that I grew up with or see,” says Vylan. “It’s feelings I have and the people around me have.”

But We Live Here isn’t just angry, or confrontational, or loud – it’s brilliant. It’s thanks to the record’s quality that Bob Vylan have swiftly amassed a dedicated and enthusiastic fanbase. “The people that picked up on it, they didn’t just pick up on it, they ran with it,” says Vylan. “They shared and they blasted it. The organic reach of it has, and continues to, blow my mind.”

The record is the product of, and written for, vibrant and diverse communities. It quickly found its people. Rough Trade made it their album of the month, and the duo are hopeful for a Mercury Prize win next year – despite the lack of interest typically shown to heavy music by the panel, Bobby knows his record is good enough to win.

One of the standout moments of We Live Here is Pulled Pork, a song that sees Bobby at his most depraved with the help of Fever 333 frontman Jason Aalon Butler. A violence-inducing rallying call, egged on by the antagonistic Rage Against the Machine-style riffing of Gallows guitarist Lags Bernard, the song digs into police brutality – and the UK’s denial of it. “If you deny a problem, you don’t have a problem; it doesn’t exist,” says Vylan. “But to admit there’s this issue of racism running rampant throughout the country, the housing sector, the employment sector, the police force…of course it’s a problem if you admit that.” We Live Here‘s mission is to bring you face-to-face with the uncomfortable realities underpinning the experience of people of colour in the UK. Bob Vylan make it clear that denial is not an option anymore.

An album born out of the impact of racism, We Live Here makes its point most directly on its final track: a minute of silence before the sweet voice of Vylan’s daughter begins. “It’s gonna be a heavy listen, so I wanted that last track to be a moment where people can reflect on what they’ve heard,” he says. “We don’t really do that a lot with music, but when you go to the cinema, you watch the film and when you’re walking out you’re talking about it. [We Live Here] is made to be listened to front to back, and I want people to hear it and then think about it.”

This finale exposes the heartbreaking reality that everything you’ve just heard from Bob Vylan is set to be repeated for generations to come. For Bobby’s daughter, it’s not a case of ‘if’ but ‘when’ she is first exposed to racism. “My voice has been corrupted by all the things that I’ve seen, all the things that I’ve done and all the lives that I’ve lived,” says Vylan. “Whereas that voice on there, my daughter’s voice is innocence. You heard this growling harsh angry voice, now listen to this soft angel and ask yourself, ‘What can I do? What can I do, because there’s ‘nuff kids out there who are going to have to grow up in the rubble of everything we’ve destroyed and everything that generations ahead of us have destroyed.”

Punk and grime were both created by the furious, underrepresented children of the rubble. The genres allowed for people without money or formal training to use their voice. All these years later, they still stand for self-expression and inclusivity, with artists like Bob Vylan acting like beacons for people in need of a community.

We Live Here makes the state of the world clear, and draws in its people to get to work on bettering it.

We Live Here is available via Bandcamp now.

Everything you’ve ever wanted is on the other side of fear.