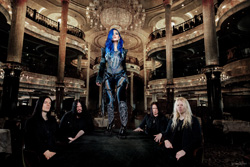 Former Rainbow vocalist Graham Bonnet has announced that Arch Enemy guitarist, also known for his tenure in Nevermore, has joined his version of Alcatrazz. A statement from the vocalist reads as follows:

“Hi all! Graham here. The cat’s out of the bag! It is with tremendous pride and excitement that I am announcing that Jeff Loomis (currently with Arch Enemy, formerly of Nevermore) is officially the new guitar player of Graham Bonnet’s Alcatrazz. Jeff is a power-house of a musician, a brilliant writer and a great guy. His skills are unparalleled and I am thrilled at the prospect of recreating the magic of the early days of Alcatrazz but with a modern, heavier sound. When I first heard Jeff, I was astonished by his technique coupled with his great feel and incredible melodies. You can have a little taste of it on the upcoming Graham Bonnet Band album as Jeff is one of our guests.”

Says Loomis: “Hey everyone, I’m super excited to be working with Graham Bonnet. I’ve been a long time fan of his vocals and lyrics for many years, and it’s going to be an honor to craft some amazing music together and play some select live shows. I want to let you all know I’m still a very active member of Arch Enemy and will be seeing you all on the road very soon with them.”

Bonnet continues: “Just to be clear, Jeff is still an active member of Arch Enemy as I am still with the Graham Bonnet Band. More news coming soon…”

Doomed Nation – Nick Oliveri stream the second single »I Am Your Sun« taken from his new solo series album »N.O. Hits At All Vol.7«