The Black Angels and Primus are not two bands that pop into your head when you think Metal Underground, but I needed a distraction from all of the “I’m missing Copenhell” (where I normally am this time of year) thoughts that were going through my head. So I headed down I-5 to Redding, California to check out this tour.

The Black Angels have a new album coming out in September called Wilderness of Mirrors from which they played three songs.

Not familiar with The Black Angels? Imagine if The Doors, early Pink Floyd, and Uncle Acid and the Deadbeats had a baby. Great sound if you like your rock on the heavier psychedelic side of things.

My only complaint was the lighting was brutal for photography. (My photos make the lighting seem much brighter than it actually was.)

Way back in February 2020, Primus announced their “A Tribute to Kings” tour which would include the trio playing Rush’s classic 1977 album A Farewell to Kings in its entirety (in addition to their own music). Of course, just a month later, the world went to hell, and everything got cancelled or postponed.

I texted a good friend who lives a few hours south of Redding on the day of the show to see if he would meet me for this gig, and he dropped everything for the chance. I learned later in the day that his very first concert was Rush on their “A Farewell to Kings” tour back in 1978 so this was some serious time travel for him.

Redding was 100 degrees, but the Redding Civic Auditorium was quite comfortable inside. Spectators had their choice of standing or sitting, and the staff at the venue were outstanding.

The stage was huge for Primus so they were set a ways back from the audience. The first set featured a bunch of Primus classics like “Wynona’s Big Brown Beaver” and “My Name Is Mud”, but it also included all three tracks off their new Conspiranoid EP. 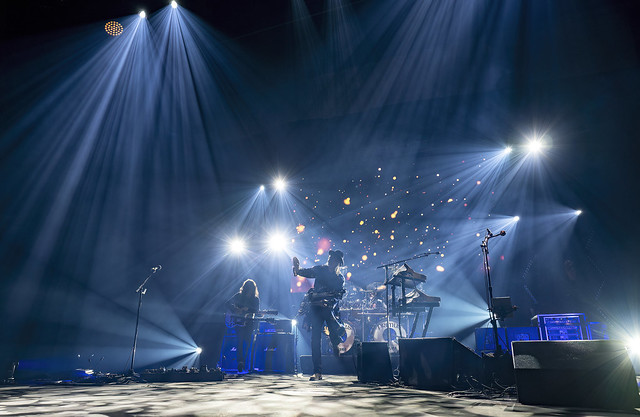 The second set was, of course, every note of “A Farewell to Kings” including identical instruments and similar outfits to Rush’s tour some 44 years ago. For me, Rush’s sweet spot was the 2112 through Hemispheres era, but I was too young to catch any of those shows. So this recreation was absolute magic that was brilliantly executed. Perhaps Primus will be kind enough to do 2112 and/or Hemispheres next?

Eight more dates of this tour in the USA remain. After which, Primus will head to Europe for 16 more shows.

If this review wasn’t metal enough for you, remember that Primus guitarist Ler LaLonde was the guitarist when death metal was born (as a 17-year old member of Possessed).