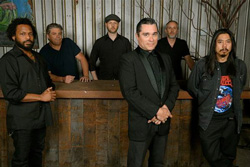 The influential San Francisco crossover thrash metal act Mordred have unleashed the music video for their new song “Malignancy.” The clip, which features appearances from fellow Bay Area metalheads Chuck Billy (Testament), Will Carroll (Death Angel) and Matt Camacho (Forbidden), was written and directed by Mordred guitarist Danny White and Christian Powell of Wintermusik Productions and can be viewed below.

“‘Malignancy’ was truly a band effort,” says White. “We all had a hand in the writing. The music was done and there were some attempts at lyrics, but the subject was just too close to heart to write about. I was relating it to (vocalist) Scott Holderby one night over drinks, and I said that it doesn’t matter who you are or what you do for a living – cancer doesn’t give a shit. He said I should just write that. The lyrics were written 20 minutes later. This is dedicated to everyone who’s lost someone to this wretched disease. Fuck cancer.”

“Malignancy” is the second advance taste of “The Dark Parade,” Mordred’s first full-length album in over 25 years. Set to be released by M-Theory Audio on July 23, the record – which will be offered on CD, digital, blue vinyl with orange splatter and a limited-edition, mail-order exclusive white vinyl variant with a Mordred turntable slipmat and autographed photo card – can be pre-ordered here.

The story behind the song: Hocus Pocus by Focus