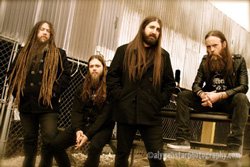 Ask anyone where the home of American death metal is and everyone except people from New York will say, Florida. The state has a long history with the extreme music, birthing such bands as Death, Obituary, Morbid Angel and Deicide as well as housing the legendary Morrisound Studios, where death metal bands from the world over flocked to to record their albums. As time has gone on, Florida still produces some of the best bands in the field, one of which emerged in 2002, under the name of The Absence.

Since their inception, the band has released four albums, which have become known among metal fans for blending melodic death metal with thrash influences and now, on their fifth full length, “Coffinized,” (to be released on June 25th,) the quintet even bring in some black metal sounds. To find out about this beast of an album, I caught up with drummer Jeramie Kling, who discussed the meaning behind the title, the artwork, why the police were called when filming the music video for the title track and much more! You can check it out below.

Tracks of the Week: new music from Yngwie Malmsteen, Witch Fever and more