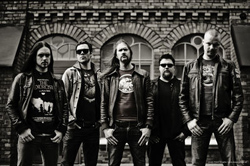 Death metal and Sweden go together like bread and butter, peanut butter and jelly or Boris Johnson and lies. The rich history of this extreme sub-genre in the Scandinavian nation has given the world such icons as At The Gates, Dark Tranquillity and Opeth to name a few and another band that has to be mentioned when discussing this litany of legends has to be Trollhättan’s own, The Crown. Having started life in 1990, initially under the Crown Of Thorns moniker, the band released two albums before having to shorten their name.

Although they split in 2004, The Crown reconvened five years later and since then have continued to release stellar death metal, including their latest opus, “Royal Destroyer,” which was unleashed only two weeks ago. To find out more about the record, its influences, being back on Metal Blade Records and much more, I caught up with guitarist Marko Tervonen. You can watch the interview in full below.

Watch: STEVE VAI Wrote A New Song, “Knappsack,” With One Hand, After His Surgery