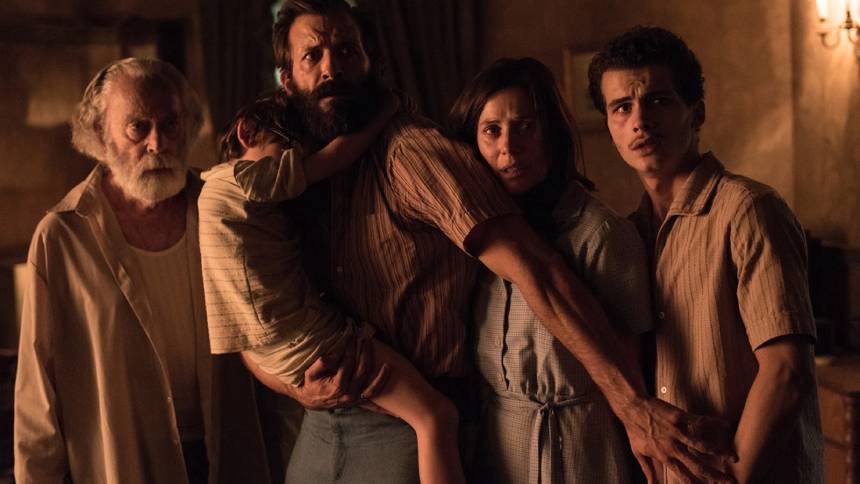 The Jimenez family have sold all their belongings, packing what is pretty much one bag per member, and moved to Madrid to start a better life. Having landed an apartment for a great deal the family settles down and the parents start new jobs. Daughter Amparo looks after her little brother Rafael and their abuelo Fermin while her parents work. Her brother Pepe should be out looking for work as well. You know what they say about something that is too good to be true? Mysterious goings on begin to happen and take a real sinister turn when whatever is haunting this family sets itself on a specific target.

We went into the screening of Malasaña 32 (we will use the Spanish title in this review) as blind as possible to give it the best chance to make an impression. The criteria was met. It was Spanish. It was a horror movie. Consider our interest piqued simply based on the legacy of Spanish horror films that have come before it. After the fact we went back and found out that director Albert Pintó’s previous film was a rather good film from 2017, Matar a Dios (with co-director Caye Casas). Damnit! Matar a Dios was such a challenging film in and of itself; we always presumed that the dark comedy was an ode or a love letter to the maverick cinema of Álex de la Iglesia. I could not go into watching Malasaña 32 expecting the same thing, because this connection was not made until after watching it, but afterwards I lament that I did not get something at least of the same value as Pintó’s feature film debut.

Sadly there is nothing different here in the execution. From the false starts, string scares, to the the finale with the tried and true convention of the ‘specialist’ to help the Ramirezes clean their home of this angry spirit Malasaña 32 tries nothing new. By standards of scary movie making, nothing sets Malasaña 32 apart from any other haunted house/apartment/flat movie out there.

Malasaña 32‘s change up as far as origin story is concerned does not save the film either. You go to a scary movie to be scared. Why things go bump in the night is secondary so even if this movie draws from a topical issue as the reason why the Ramirez family is being haunted your job isn’t to make a sociological statement and convert me. Your job is to scare the bajeebers out me and last I checked I was still chock full of bajeebers after watching this.

To it credit, other than the obvious haunting issue the other predicament the family find themselves in answer that age old question, “Well, if it’s haunted why don’t they just move out?”. Well for once someone has an answer for that, they cannot afford to. Selling all they have to move to Madrid thus they cannot afford to back out of their mortgage is something new and never been discussed before. Well why don’t they just leave? Well, here is your answer. Their is no such thing as ghost insurance. There is some emotional resonance with the strain of having nothing, trying to get by and get on with this new life. This intrusive force simply has no regard for a family trying to get a leg up in life.

I read somewhere, someone saying before going in to watch Malasaña 32 that if Javier Botet is in the cast then it is a sure sign that the movie is going to be very scary. Boy I wish this were true. Javier, as good and great as he is, has a roll to fill. He has that certain type of physique horror productions look for and have capitalized on. He is the Spanish Doug Jones. But if the writing and the rest of the production do nothing but the same old tricks to try build tension and fear then all his efforts are for not. We still like the guy and any work is good work. it is unfair to bet on the success of a film based on his involvement.

This is basic studio system cookie cutter horror movie making. Its been done with a modest budget, by committee, with everyone on top trying to capitalize on a trend and make a easy return on their investment. Because it comes out of an industry with an established reputation for making scary horror movies it will, and has, already sold to multiple categories around the World. So, mission accomplished. Capable people were brought in to make sure it came out ‘perfectly fine’ and in tune with nearly everything that has come before it- from Spain and other corners of the World.

Everything here is by the book. The accounting book.

This will fill in the gap until something truly exceptional and scary comes along.