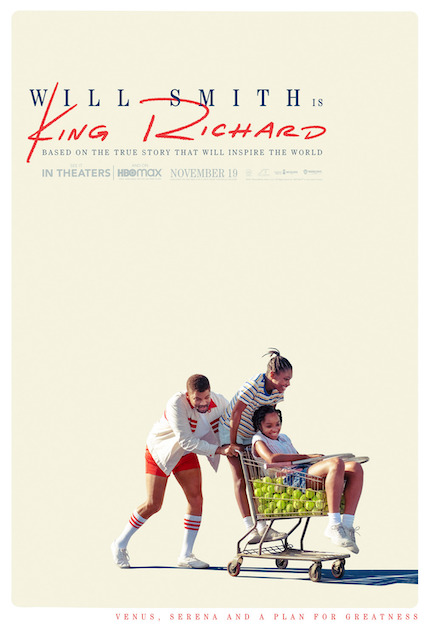 If someone showed up at your literal door with a 78-page life plan, chances are, you’d slam the door in their face or barring that alternative, run in the opposite direction.

Tennis superstars Venus and Serena Williams didn’t have a choice. Their father, Richard, had that 78-page life plan already written before they were born in successive years.

A refugee from Louisiana who settled in Compton, California, Richard, like so many Americans, had a dream, but unlike the vast majority of his fellow Americans, Richard’s plan — a plan any reasonable person would consider foolhardy at best and borderline insane at worst — came to fruition in the tennis careers of his two youngest daughters and their unprecedented, decades-long success near the top of the mostly white tennis world.

That Richard and not Venus or Serena would headline an authorized biopic, King Richard, directed by Reinaldo Marcus Green (Joe Bell, Monsters and Men), seems like an odd, even bizarre choice, but until we get biopics dedicated to Venus and Serena sometime in the future (a sequel or sequels of sorts), King Richard more than adequately serves as an introduction to the Williams family, beginning with Richard. Played by Will Smith, Richard is a multi-layered, often contradictory, complex character with a fearlessness rarely equaled in his decades-long career as a performer.

In the early scenes, Green and screenwriter Zach Baylin (Creed III) introduce not just Richard or the Williams family, flourishing against all the odds, including the central, unspoken, never fully seen villain in King Richard, institutional racism. As an outsider to the affluent world of tennis, country clubs, and generational wealth, Richard instinctively recognizes that nothing less than — to borrow a basketball term — a full-court press on all levers of power, influence, and prestige within and outside the tennis world gives him and his daughters the best chance at success.

Nothing is guaranteed, of course, but Richard displays an unrelenting, monomaniacal focus on giving Venus and Serena every opportunity, from teaching them whatever he and Oracene have learned through books, magazines, and videos, to pushing his way into the offices of potential tennis coaches, all but two of whom flatly reject Richard.

The two coaches who do take a chance on the Williams sisters, Paul Cohen (Tony Goldwyn) and Rick Macci (Jon Bernthal), enter at two key points in the story. Cohen, when everyone else has said no, gives the Williams sisters the additional training they need to begin competing on the junior tennis circuit. Later, Macci, an extremely successful Florida-based tennis coach, ultimately bends to Richard’s audacious demands (free room and board for the entire family vs. 10% of Venus and Serena’s future winnings, if any) before almost immediately regretting the decision when Richard, belatedly recognizing that the singular focus on tennis might do more harm than good for the still young Williams sisters, chooses to permanently suspend Venus’s participation in the the junior circuit.

King Richard traces or connects that decision to one-time wunderkind Jennifer Capriati’s spectacularly public flameout. True or not, it feels a bit simplistic, even reductive. Then again, as with all biopics, filmmakers consciously choose which events to depict in the subjects, how those events will be depicted (i.e., spin), and even the order in which they appear onscreen, subtlety shifting and shaping an audience’s perception of the subject.

To Green and Baylin’s credit, their depiction of Richard, while limited in some aspects — Richard’s other children have been carefully excised from the film, along with Richard’s deliberate absence from their lives or accusations of infidelity — embraces the thornier, more unpleasant aspects of his personality and interactions. His relentless pursuit of excellence through his daughters, clearly meant as an attempt at redemption by proxy, often makes him insufferable, an element of his character that Smith admirably doesn’t try to hide or cover up by trying to soften the rougher aspects of Richard’s personality.

As Richard, Smith delivers one of the finest performances of his career, but he’s not alone in delivering their level best to King Richard. While Aunjanue Ellis as Oracene is something of a stealth MVP, as smart and aware as Richard of the institutional forces arrayed against them, but not without her own frustrations at Richard’s impulsive decision-making, it’s relative newcomers Saniyya Sidney and Demi Singleton as Venus and Serena, respectively, who deliver wonderfully genuine, grounded performances. That they repeatedly hold their own against much more experienced actors suggests they both possess significant talent. They also, however, excel at conveying Venus and Serena’s complex inner lives, along with their tennis prowess.

Not surprisingly, a key scene in King Richard doesn’t involve Venus or Serena’s on-court success (that comes later, offscreen), but a sit-down involving Richard, Oracene, Venus, and senior executives from a sporting goods company. After some back-and-forth over the details, Richard and Oracene defer to Venus.

It’s not the first nor the last time that Richard and Oracene, recognizing that the love, affection, and commitment they’ve shown Venus and Serena has given their daughters the greatest gift a parent can give a child: the autonomy to make their own decisions. Venus, trusting in her family and more importantly, herself, makes a decision that could either cost her millions or make her millions. The brief smile that crosses Venus’ face before she gives her decision says it all.