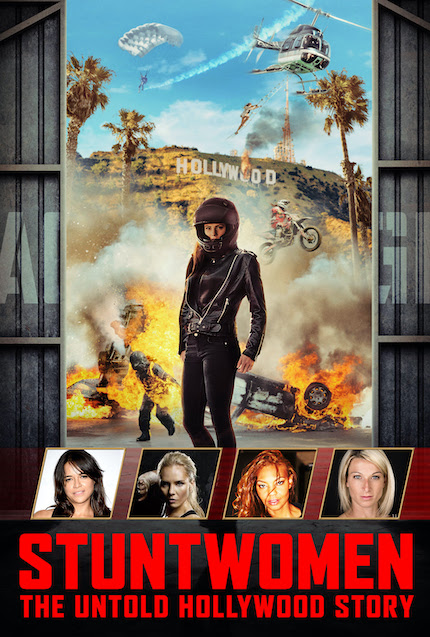 Have you ever watched Charlize Theron, Lynda Carter, Michelle Rodriguez, Michelle Yeoh, Brie Larson, Pam Grier, or Carrie-Anne Moss in an action flick and wonder, “How the hell did they do that?”

Based on the best-selling book by Mollie Gregory, the new documentary, Stuntwomen: The Untold Hollywood Story, aims (in part) to show us. Directed by April Wright (Going Attractions: The Definitive Story of the Movie Palace), this exploration goes into who these stuntwomen are — and why and how they do what they do. The doc also goes deeper into the industry’s darker side.

Namely, that means sexism. As always in any male-dominated environment or industry, there’s a huge group of men that push back, blacklist, or even sabotage women — especially when they try to break in.

Funny enough, women were writing, directing, producing, doing stunts, and even running studios when the film industry was in its industry. When men — and Wall Street — discovered how lucrative these jobs were — they swooped in and pushed women out, creating the sexist veins that still run through Hollywood today.

Thankfully, Stuntwomen doesn’t sweep this fact under the carpet, but gives it a roundhouse kick. Director Wright, being a woman herself, likely knows the discrimination and systematic bias first-hand. If she somehow does not, then the women she interviews certainly speak out about their own ugly experiences.

It makes one wonder: just exactly what will it take for parity or equality in this industry?

And then there are the stories of drug use by stuntpeople, which is quite frightening to hear when their jobs and lives depend on being as safe as humanly possible. Sadder still are the tales of the women who were hurt in the name of their profession… and killed in unfortuate circumstances on set.

Wright manages to get some very poignant stories out of these amazing women; this humanizes them and gives the documentary weight and personality. In other words, this human element makes Stuntwomen stand out from most talking head documentaries.

But what talking heads they are! We hear from ass kickers like Michelle Rodriguez (who narrates and is also an EP) as she meets with the women who do insane stunts on camera in order to keep her safe, as well as from absolute veterans in the industry. Women who were the first to break into the union reminisce on their lives and careers and how they still want to work to this day.

In addition to hearing stories and watching these women train, Stuntwomen offers a look at rarely-seen footage. During one of the more amusing segments, one of the performers drag races her teenage son in their suburban neighborhood.

In short, Stuntwomen is 84 minutes of jaw-dropping inspiration.

Want to check out this ass-kickin’ doc? First, get a taste of packaged adrenaline in the trailer for the doc below.

To be wrong is nothing unless you continue to remember it.