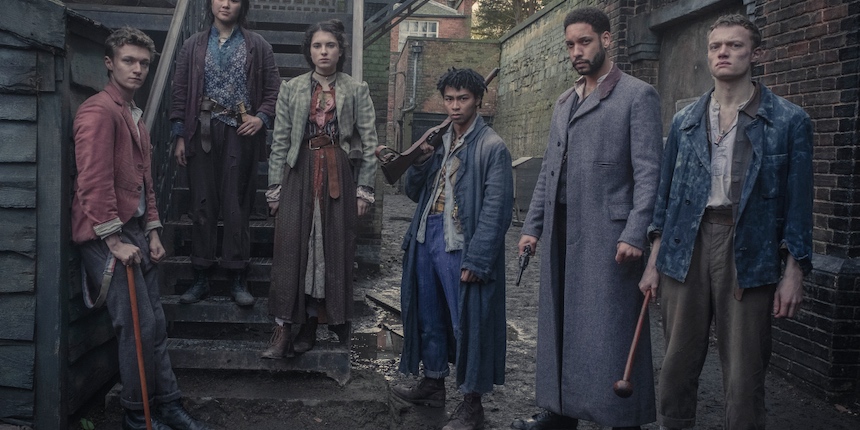 Towards the end of The Irregulars, an eight-episode, Victorian Era-set, supernatural/fantasy series debuting on Netflix, Sherlock Holmes, Arthur Conan Doyle’s once and future “private consulting detective,” comes to a sudden, world-breaking revelation: He’s not the hero of this particular tale. Far from it.

In fact, Holmes is a secondary — if not marginal — character in creator-showrunner Tom Bidwell’s (Watership Down) revisionist take on Holmes, Watson, and the titular characters, enterprising errand-runners featured in a handful of Doyle’s canonical stories, but here elevated into the heroes — and masters of their own fates — of their own rousing, enthralling story, a near-perfect mix of episodic and serialized storytelling, tautly, compellingly told from the first nightmarish moments to the last bittersweet, poignant one, delivering a genuinely satisfying emotional payoff while leaving just enough loose ends to potentially justify a second go-around with the title characters.

As originally conceived by Doyle, Sherlock Holmes was a man of singular logic, monomaniacally driven by a combination of natural intelligence, deductive reasoning, and a resolute rejection of the supernatural. (In his later years, Doyle became obsessed with spiritualism and psychic phenomenon, in direct contrast to his greatest fictional creation.) In Bidwell’s potentially divisive reimagining, Holmes (Henry Lloyd-Hughes) has devolved into a mere shade or shadow of his former self, wrenched by trauma, loss, and grief into rejecting the twin pillars of his rationalist belief system, science and reason, for the transitory, self-abnegating diversions of opium and its derivatives.

To foreground the Irregulars, Bidwell’s iteration of Holmes doesn’t make an appearance until roughly the halfway mark of the first season. It’s Bea (Thaddea Graham), the leader of the aforementioned multi-racial “Irregulars,” who finds a drug-addled Holmes grieving at a gravesite, all but useless in solving the central mystery Bea and her compatriots, Jessie (Darci Shaw), Bea’s younger, preternaturally gifted sister, Billy (Jojo Macari), the brooding, self-styled muscle of the group, and Spike (McKell David), the group’s conciliator, occasional conscience, and voice of caution in the face of the Irregulars’ more dangerous pursuits, have tasked themselves to solve before a certain apocalyptic event ends their individual and collective futures. To the rigidly class-bound society of Victorian England, the Irregulars barely worth a second thought, but in Bidwell’s unapologetically multi-cultural take, they’re the world-saving, apocalypse-preventing heroes we need.

Initially, Bea and the Irregulars find themselves working for Holmes’ emotionally constipated longtime companion, Dr. John Watson (Royce Pierreson), less the canonical ally than an active antagonist who reluctantly taps the Irregulars plus Leopold (Harrison Osterfield), a royal heir engaged in a precarious game of the prince and the paupers, to solve a deeply perplexing case: The kidnapping of several infant girls from seemingly locked rooms. Their first, halting investigation eventually leads them to a cursed culprit with a tragic backstory. It also functions as an entry into the larger mystery involving twisted perpetrators bestowed with supernatural powers that unfolds monster-of-the-week-style over the course of eight, densely packed episodes. Across the season, the Irregulars encounter everything from unexplained avian attacks and mesmerized mobs to wide-toothed doppelgängers, innocent-looking face-stealers, and duplicitous dream masters.

It’s difficult, though far from impossible, to go wrong mixing episodic elements, an overarching, mythos-driven storyline, and credible character development, but finding the almost alchemical balance between the three has proven to be more of a challenge than it appears. The template initially popularized and then perfected on The X-Files and later Buffy, The Vampire Slayer, Angel, and more recently, Supernatural, serves The Irregulars extremely well, essentially giving Bidwell a structure or scaffold to hang the story beats necessary to fill out a relatively short season without the usual narrative detours or dead-ends that tend to plague serialized storytelling. Bidwell even saves the obligatory catch-up flashbacks for Holmes and Watson until roughly the middle episodes. Once done filling in their respective backstories, Bidwell leaves the flashback crutch behind for more straightforward, present-tense storytelling.

Following the Bridgerton model of race- or color-blind casting that adds another element of the fantastical and counter-factual to the series, The Irregulars features a talented, enthusiastic cast of relative newcomers, beginning, but certainly not ending with Thaddea Graham as Bea and Darci Shaw as Jessie. Both deliver the requisite amounts of believable emotional expressiveness. While the Bea-Jessie relationship functions as the narrative, thematic, and emotional core, the relationships among the male characters who circle Bea and Jessie are only slightly less important or developed across the eight-episode season. Though intentionally secondary, Holmes and Watson’s long-term, platonic friendship also plays a thematically significant role, partially mirroring and echoing Bea and Jessie’s layered, conflicted relationship.

The first season of The Irregulars is now streaming on Netflix.

ScreenAnarchy – Review: THE IRREGULARS, Holmes Without Sherlock Proves To Be A Winning Formula
Author:
Go to Source
March 27, 2021

‘Slash Film: Now Stream This: ‘One Night in Miami’, ‘Master and Commander’, ‘After Hours’, ‘Gretel and Hansel’, ‘The Straight Story’, and More’

Horror Movies Coming to Shudder in May Include Gory Original Slasher ‘Skull: The Mask’ and More