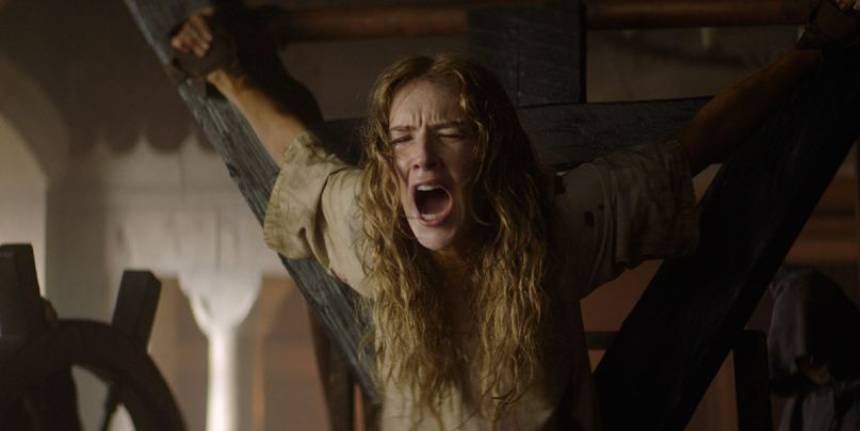 There’s a scene in Neil Marshall’s new feature when a man’s head is run over by a cart. The man had been beating his wife; she manages to knock him over, and in a clever and quick-thinking moment, she picks up a rock, throws it at the workhorse, which then bolts, running the wheel right over the man’s head, which bursts like a melon. The woman might be traveling on foot for now, but at least she has saved herself from an abusive husband. It’s a gross and fun moment of practical effects and subplot.

I mention this, as it is arguably the only good moment in the film. While many films have captured the atmosphere of terror and abuse that consumed 17th England during the years of the Great Plague and witch trials, The Reckoning neither adds anything new to these stories, nor does tell its own story in a way that is frightening, or thought-provoking. While it seems to want to be an exploitation film that also delves into some serious themes (as with Marshall’s previous and far superior films like Dog Soldiers and The Descent), this one is shocking in the poor quality which negates any ‘good’ it’s trying to accomplish.

Grace (Charlotte Kirk) and her husband Joseph (Joe Anderson) eek out an existence in the English countryside with their new baby daughter, trying to avoid the ravages of the plague. Their poor living standards is offset by their happiness, and apparently most of their income goes to the cost of Grace’s hair and make-up, which looks like she’s permanently waiting to be in a 1980s music video. Through an act of trickery by their landlord Pendleton (Steven Waddington), who lusts after Grace, Joseph catches the plague, and rather than infect his family, he takes his own life. After a montage of grief and buriel, Grace is faced with accusations of witchcraft, for which she is put on trial and tortured by the local Witchfinder (Sean Pertwee).

The deplorable treatment of women during these so-called trials — presumed guilt, imprisonment, horrifying torture, death — has been documented and portrayed in other films; not that there’s can’t be more, of course, but there is nothing in the narrative or style of The Reckoning that brings anything new or different to these stories. It’s perhaps trying to be a bit daring, by way of Grace’s frequent nightmares that feature the devil trying to seduce her – but these scenes (albeit with some good effects work with the devil creature) are little more than laughable.

Grace has reason to be scared, between these dreams, the fact that her mother was killed by this same Witchfinder, and the torture to which she is subjected. But you’d never know it; between Kirk’s weak and superficial performance, the fact that even after days of this ill treatment her hair is still nearly perfect and that even the few smudges of dirt she sports are so careful placed as to be (I have no choice but to use this word again) laughable, it’s impossible to believe this woman has endured anything but perhaps a slightly uncomfortable break in her trailer between takes. Even the practical make-up of the various wounds seems designed to highlight Kirk’s beauty as oppose to convince us she’s a victim of any physical abuse.

The cast is peppered with acting vets who are doing their best to raise the mundane level of the script, with dialogue filled with blanket statements, to something reasonable. Pertwee especially seems to be at least trying to find proverbial scraps of meat on the bones as he chews the scenery as the Witchfinder who takes perverse pleasure in the pain he inflicts, even having an almost-burned woman as his faithful assistant. But even they could not save a script lacking in substance, nor a film that takes itself so seriously, yet is inept and insubstantial at almost very turn.

It would have at least been some saving grace if the film had fallen into the ‘so bad it’s good’ category; and perhaps it will for some viewers. But alas, The Reckoking suffers from being too boring, too lacklustre, and too poorly constructed from start to finish, to recommend.

The Reckoning will be released by RLJE Entertainment and Shudder in theatres, on demand, and digital, on February 5th.

ScreenAnarchy – Review: THE RECKONING, Nothing to Recommend
Author:
Go to Source
February 3, 2021