Well, the latest picture shared out of Rob Zombie’s socials is a direct look at Herman, Grandpa and Lily of The Munsters! This is the first time that we have seen their actual skin tones and wardrobe pop like this. Best, of all Herman is wearing some really great shades. Zombie even jumps in on a pic, because who the hell would wanna pass up on this rad photo op?

The latest photo does give a us an even better look at The Munsters. I’m really loving Herman’s Rockabilly look. The shades with the skull button-up is pretty rad. I’m sure that there is something that happens alternatively to get him out of his classic garb and into the new diggs. Yet, another reason to get excited about this film. I’m loving the look of each character and it’s great to see Herman in REAL green. Of course, if you recall the original Munsters series was black and white for the most part. In a special effects trick to create just the right shade of black and white for Herman, the makeup team would actually paint Herman a shade of bright purple. This shade of purple would give the skin tone that we see in the actual episodes. Meaning outside of the episodes which were color corrected later on to take advantage of color tv’s, Herman wasn’t really green. But, he was supposed to be. To our imaginations he was, and that’s yet another reason why this photo is so ‘frickin rad. Herman is indeed green.

“Verified – Greetings from Budapest!Heading into the weekend with my very own Monster Squad… I mean Munster Squad!  Dig these 3 groovy ghoulies!” Zombie wrote.

We already know that Dee Wallace, Jorge Garcia, Sylvester McCoy, Richard Brake, Cassandra Peterson (Elvira), Pat Priest, Sheri Moon Zombie, Jeff Daniel Phillips, Daniel Robuck, Catherine Schnell and more are onboard. So, far we don’t have a release date, but we will be sure as heck to let you know when we do.

Hey Rob. Can we get a trailer yet? 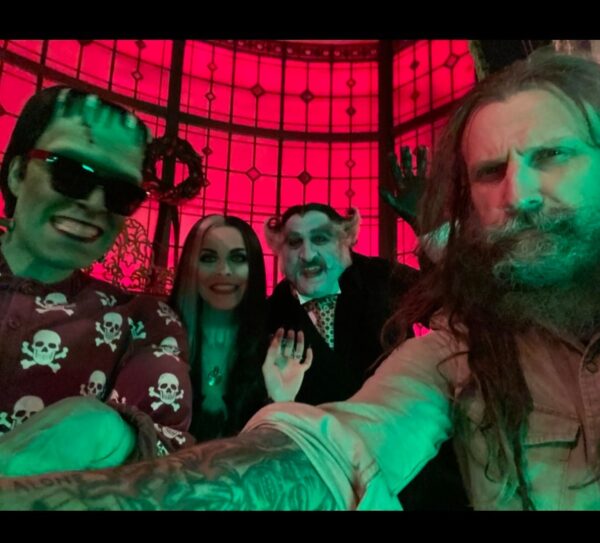 ‘Slash Film: Firestarter Went As Practical As Possible For Its Explosive Special Effects’