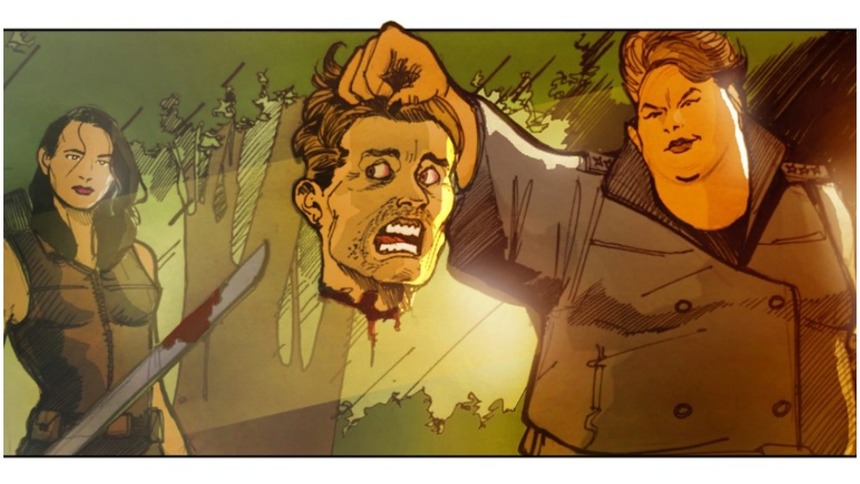 2021 Sanfic Industria concluded last Wednesday and the winners of the various programs were announced at Variety. Given that our main line of interest here at Screen Anarchy is genre and fantastic cinema we were eager to see who came out of the program with a boost to their project.

The big winner of the LAB was Miguel Alejandro Gómez and his project Crono-Cápsulas. He won a Morbido prize and one from our friends at Blood Window as well. A few friends had projecsts in the program and it was good to see that Seba De Caro’s El Viejo and Sofia Garza-Barba’s Santos Remedios will take home Morbido Prizes.

Gómez will be invited to participate in the Blood Window program at Ventana Sur in Buenos Aires, Argentina in December, in whatever format the global health crisis dictates. Pablo Guisa from Morbido went into further detail about what his prizes will do for each filmmaker. Guisa told us about his experience with the lab first.

“The main purpose of the Sanfic-Morbido Lab is to support and follow up all, and every project presented, to help them in every step of the way. In that spirit, all 6 projects presented, when the time comes will have an automatic pass as official selection for Morbido Fest and will receive an offer to play in our LatAm pay tv channel, Morbido TV.

I’m proud and happy with the Sanfic-Morbido Lab first edition results. We had male and female directors presenting 6 unique and very different projects. This made sense to have representation of the best of genre from all our regions”

My friend Sandra Arriagada picked up the Latino Lense Workshop Award for her project, Matria, where our header image is from. Her production partner, Lucio A Rojas (Trauma, Living Dead), told us this morning that this award allows her to present Matria to NALIP, the National Association of Lation Producers, a group of North American producers, to see if any want to come on board this production.

Matria has already drawn attention from Blood Window where she won the Bifan/Naff award. She will be going to Korea this year (safe travel pending?) to take part in their industry program NAFF/B.I.G. Variety also has a seperate article about additions to the cast of Matria and a quick interview with her about shooting her most recent project Living Dead.

Descriptions of all six projects are down below.

Miguel Alejandro Gómez, director of Costa Rican box-office smash “Maikol Yordan Traveling Lost,” proved the big winner at Sanfic-Mórbido Lab, scooping both a Blood Window and Morbido Prize for “Crono-Cápsulas.” It centers on a young psychology student who decides to use an experimental medication to confront past traumas in her love life by traveling back through time.

Further Morbido Prizes went to “El Viejo” and “Santos Remedios.” El Viejo” taps collective and childhood memories of Argentina’s military dictatorship and the haunted house fable. “Narrating a story that pits childhood against the most terrifying past in the history of my country is a unique experience,” explains director Seba De Caro.

A young girl, abandoned by her father, follows a mystical coyote into the wilderness to tragic consequences in “Santos Remedios” from Sofia Garza-Barba, who impressed with her award-winning short film “Death After Pancakes.”

Mórbido Prize winners receive backing from the organization to the tune of up to 30% of the film’s proposed final budget. The plaudit also assures the project a commercial premiere in Mexico, and representation for international sales and programming on pay TV across Latin America through the Morbido TV network.

The Latino Lense Workshop Award went to “Matria,” headlined by Itziar Castro and Daniela Vega, a gore-fest from the prolific Sandra Arriagada about seven evil men pitted against one another in a last-jerk-standing game of death, sponsored by the women they’ve abused in their lifetimes.