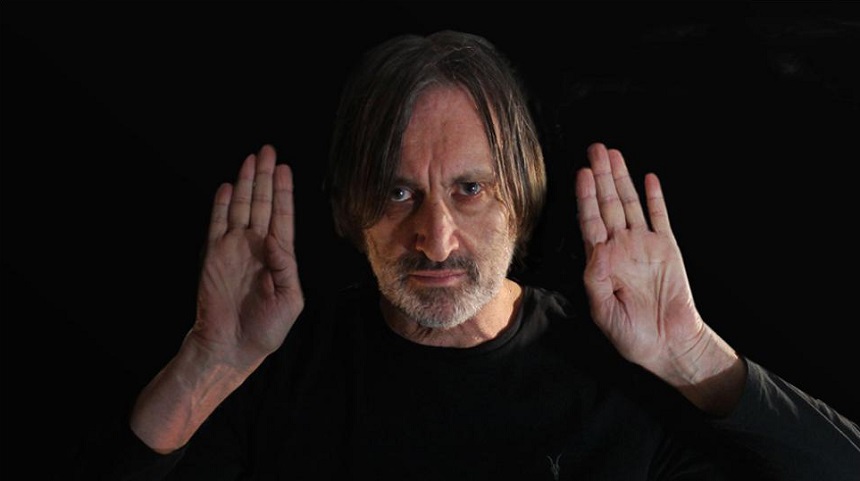 Over the years I have had the privilege to be in the same space as composer extraordinare Simon Boswell a few times. Near as I recall the first time I saw Boswell perform live was when he was in Montreal at Fantasia for the screening of his friend Richard Stanley’s documentary The Other World back in 2013.

It was two years later when we would officially meet at Morbido Fest in Puebla. The intimate environment of Morbido pretty much forced us into friendship at that time and we’ve been running into each other, along with his partner the absolutely lovely Lola (LG) White, and their bandmates in his band The AND ever since. The last time was at the last Morbido Fest we were allowed to be at, fuck you very much global health crisis, in 2019 when we celebrated the 30 year anniversary of Jodorowsky’s Santa Sangre which Simon composed the music for.

Simon has a wonderful and comprehensive release of the soundtrack of Santa Sangre out now. It’s chock full of goodies and extras on two clear crystal vinyl records. They have also found a U.S. distributor so now for us on this side of the pond we can worry less about the additional costs of having products exported out of the U.K. post-Brexit. When you see how gorgeous this set looks in the gallery below you’ll be throwing your money at the product soon enough.

But this is not all about schilling an artist’s contribution to cult cinema at you. As any good human being is wont to do we first wanted to catch up with Simon and ask how he and the family have been coping this past year, in one of the global pandemic hotspots, England.

I was incredibly busy during the lockdown of 2020. This was mainly because, just before Covid hit, I had done a deal with Lemon Films to score three Mexican horror films by different directors: Adrian Garcia Bogliano, Lex Ortega and Tamae Garateguy. In addition, I was contacted to write the music for ‘Blithe Spirit’, a UK film starring Judi Dench, Isla Fisher, Leslie Mann, Dan Stevens and Emilia Fox, based on the Noel Coward play of the same name. Unbelievably, we recorded the orchestral score at Air-Edel Studios, London, finishing literally the day before the UK went into complete lockdown in March 2020. Known as I am for cult, genre and horror films, it was a great experience to come up with a completely comedic score. I loved it!

I confess that I really didn’t know much about Jorodowsky’s status as a film director back in his early years. Santa Sangre was made a few years after El Topo and Holy Mountain and someone as ignorant as I would presume because of his cult status now that someone could not simply walk up to Jodorowsky back then and pitch to score his next film. But did he have the same celebrity status back then? So I asked Simon to give us a recap of how he became involved in the project, keeping in mind that he was already solidifying his own reputation as a composer for the genre gods, scoring films from Bava, Argento and Soavi.

In 1988 I was contacted by Dario Argento’s brother Claudio about writing the music for ‘Santa Sangre’. I had already been working on Italian horror and Giallo movies for 3 or 4 years – ‘Phenomena’, ‘Demons 2’, ‘Stage Fright’ and many others. I guess I was the new hot kid on the block. I had seen ‘El Topo’ back in 1971, when I was at college in Cambridge, UK and had never forgotten that film! Alejandro was already a huge, cult figure on the indie film scene and let’s not forget that he is also a musician and had performed composer duties on both ‘Holy Mountain’ and ‘El Topo’. All of that could have made me very nervous as I stepped into the cutting room in Rome, but Alejandro was sweet and generous and immediately put me at ease telling me that I must only compose whatever felt right in my heart.

On to the release. Just how comprehensive is it? We asked Simon to fill us in on what is in this Santa Sangre Special Edition that fans of the film may not have heard before. We said there would be some surprising goodies in this edition. This includes a performance from Jodorowsky himself; something anyone who has taken in a performance from The And will have seen. We also find out why this packaging looks so damn good. Hint, it’s Lola.

I have been putting this special version together for some time. There are many cues from the film that were never released on previous editions of the soundtrack and I wanted to include these for the first time. So it really is the complete score. Rummaging through my DAT tapes, I also recently found all the recordings that were made on the set when the movie was shot in 1988 – the circus band, the street music, the funeral band and some of the cast performances. So all that is on there as well. Plus, I had met up with Alejandro and filmed and recorded him to appear as a virtual guest in my live shows, so I decided to put one of those tracks, featuring his deep, hypnotic voice on the record too. The album is a double: 2 crystal clear vinyls – a nod to the ‘Invisible Man’ section of the film – with sumptuous artwork by LG White and loads of brilliant stills from the movie. There is a free download code too, for full quality 48K 24 bit wav audio files, so you don’t have to wear out your precious vinyl!

Where can fans buy this new release? Good news of course is that an American distributor came on board to release it too. There is one place and one place only to pick this comprehensive set up.

This release is exclusively available from my website www.simonboswell.com/shop We have USA and EU distributors now, so postage is really cheap and delivery very fast!

You may or may not know that some of the other Anarchists are filmmakers first and when I put word out that we would be hearing from Simon they wanted to know what his process is, how he goes about composing a score for a film. Is he given a script to go through? I joked to Simon, “Do they ask for Dust Devil but with There’s Only One Jimmy Grimble mixed in?”. (Let it be known that There’s Only One Jimmy Grimble is one of my favorite footie movies of all time)

Occasionally I will start work from script stage – ‘Photographing Fairies’ is a good example, where I composed the very symphonic main theme before seeing any of the footage from the movie. Usually, though, I am contacted whilst they are editing the film, and preferably when it is what we call ‘locked’ ie the picture is not going to change. This is important so that the music I write will fit exactly to the images. Otherwise there is a lot of energy expended changing and editing the score.

Every director has different requirements from the music. All the good ones, though, will give me free rein to bring my own, fresh spin to a project. You can talk about music till you’re blue in the face, but you can’t really judge it until it’s recorded and you see the finished film. So there’s a lot of trust involved.

As Simon mentioned above he recently composed for two friends of ours, Adrian (Juega conmigo) and Lex (Animales humanos). This all comes from our years spent hanging out con nuestra familia Morbido. I’ve determined from observation over the years that both gents have had wildly different musical tastes and experiences. Adrian was, for a while, diving into a lot of European based music recently. Lex is/was a vocalist in a death metal band and is pretty metal overall. So where in Simon’s and their experiences did they want to pull influence from for the scores for their films? What kind of score can we expect from each film?

Lex and I agreed that I would write a really edgy score for his film ‘Animales Humanos’. This ranged from distorted, electronica to off the wall, nasty orchestral music. Adrian’s film is about a possessed boy, so I came up with very spooky, child-like themes and instrumentation, though there is plenty of scope for weirdness and nasty shocks!

I also heard from Lola that she co-wrote one of the tracks for Lex’s film as well. On top of that I was surprised to hear from Simon that his son, Jimi, contributed to the track as well. I remember Simon sharing a video of his son playing a song from the band Polyphia. If you know that band you know that it’s some incredibly technical stuff and this kid was absolutely crushing it.

For the finale to ‘Animales Humanos’, we wanted an otherworldly voice as part of the crescendo. Lola came up with some brilliant vocals for that – and my son Jimi (shaping up to be a world class musician himself) plays some very cool guitar on it , too.

So what’s next for Simon Boswell?

I am currently working on the third of the Mexican horror films, directed by Argentinian, Tamae Garateguy. This movie, ‘El Amarro’, sits in the world of voodoo and ‘ santeria’ in contemporary Mexico City. So I’m touching, stylistically, on where I went with Alex de la Iglesias’ film ‘Perdita Durango’ crossed with a Bernard Herrmann thriller-style orchestral approach.

Otherwise, I’m quietly preparing for this wretched virus to go away so I can perform live again with my band ‘the AND’!

‘Slash Film: ‘Boss Level’ Trailer: Frank Grillo is Sick of Dying Over and Over Again’