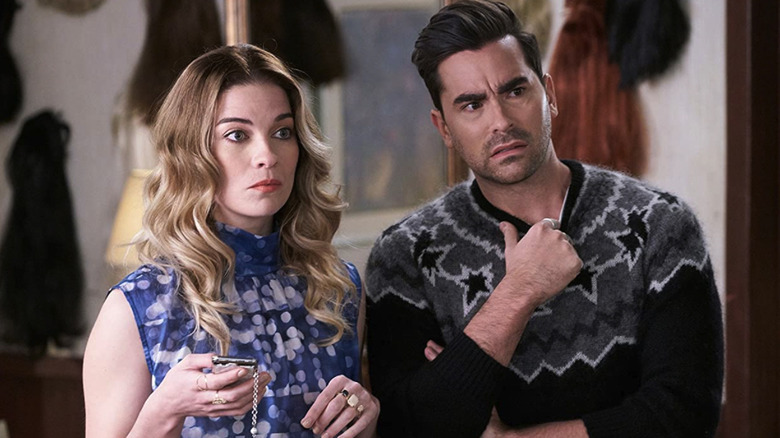 (Welcome to Survey Says, a feature where we conduct a movie-related survey for a random group of people and explain why they’re completely right, completely wrong, or somewhere in between.)Canadian comedy series “Schitt’s Creek” is a prime example of the type of show that easily could have faded into obscurity in the era of Peak TV. But thanks to stellar writing, pitch-perfect performances, an all-important bump in popularity when it began streaming on Netflix, and a wonderful balance between sarcastic and genuinely heartwarming moments, the show became a global sensation. Its final season absolutely cleaned up at the Emmy Awards, setting multiple records with its number of wins and cementing the show’s legacy as a modern classic.

We can all agree that “Schitt’s Creek” is great. But here’s a topic that might be a bit more divisive: what is the show’s best season?

We Crunched The Numbers 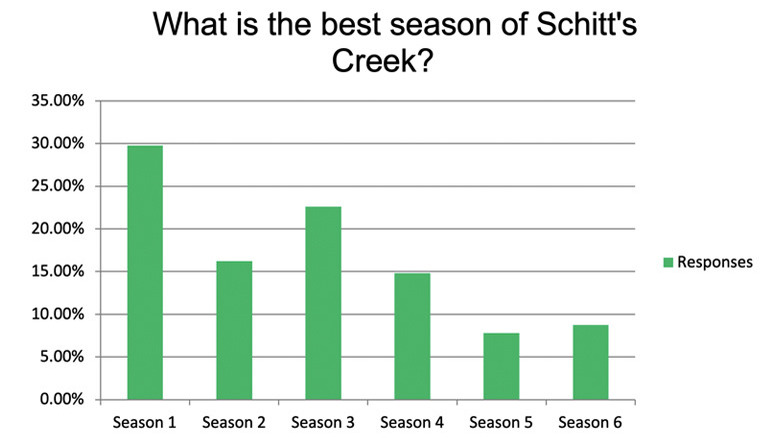 We sent out a U.S.-based SurveyMonkey prompt asking that very question, and 628 brave souls took time out of their day to respond to this very important study. After running their answers through a military-grade high tech supercomputer, we were able to produce this bar graph displaying how they responded.

Here’s a written breakdown for those of you who have held a grudge against bar graphs since third grade math class:

The Voters Have Spoken… 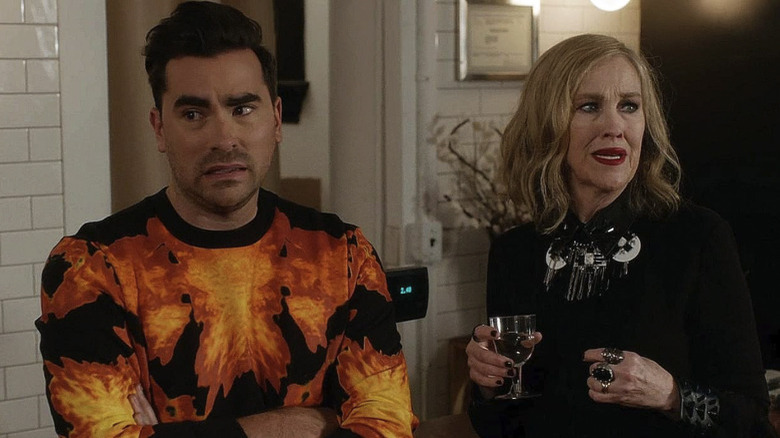 I’ll give the responders this much: the first half of “Schitt’s Creek” season 5 is a little rough. Thankfully, a strong back half – including episodes like “Meet the Parents” (in which there’s confusion about whether or not Patrick’s parents know he’s gay) and “The Hike” (in which Patrick proposes to David) – pull it out of its small tailspin, and the plane lands smoothly with the excellent finale, “Life is a Cabaret,” which contains a show-stopping musical and the high point of Stevie’s character arc.

But I have a bone to pick with these folks about the rest of their choices. 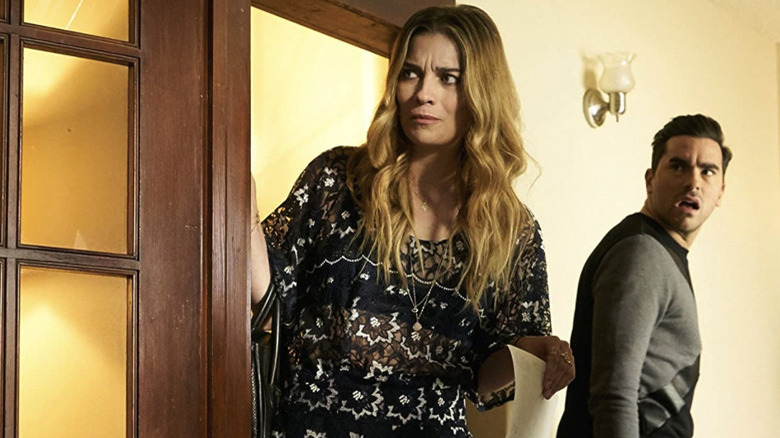 The people who answered the survey claim that season 1 of “Schitt’s Creek” is the best season, and I could not disagree more. The first season of the show is fine – good, even – but broadly speaking, this is the type of show that gets better the more time you spend with its characters. Take Alexis (Annie Murphy), for example: in the first season, she’s basically a self-obsessed narcissist with no ambition and a shallow obsession for Mutt (who, let’s face it, is a pretty dull character). She’s funny all the way through, but she grows so much by the end of the show, eventually forming her own business and experiencing a life-changing, mature, adult relationship for what seems like the first time in her life.

The Rose family spends the entire first season desperate for a way to escape their new small-town setting and regress back into their rich, obnoxious lives. The show starts to get really great when that concern slowly begins to move to the back burner and the family begins to make themselves more comfortable in Schitt’s Creek. Plus, Patrick doesn’t even show up until season 3, and his relationship with David and the energy he brings to the show feels essential to what the series ends up becoming, like a far less evil version of what Michael Emerson brought to “Lost” as Ben Linus.

Allow me to quickly make the case for season 6 as the best “Schitt’s Creek” season. I’d argue that the plot lines for all of the main characters in season 6 are the most collectively satisfying. Alexis comes into her own as a professional after that heart-wrenching break-up with Ted (which is one of the most emotionally devastating moments in the whole series, in a good way). David and Patrick spend the whole season hilariously trying and failing to plan their wedding. Moira’s career kicks back into gear when her movie (“The Crows Have Eyes 3: The Crowening”) finally premieres, bringing Alexis and Moira closer together. (There’s also that great late-season subplot about the reboot of her former soap opera, “Sunrise Bay.”) Johnny and Stevie start working together again (with Roland as a partner this time) and travel to New York City for a pitch to expand their motel empire. And of course, Twyla reveals that she’s been a multi-millionaire this entire time, and buys the café because it makes her happy.

If you read that last paragraph and still think season 1 is better, allow me to quote Alexis: “ew.”

Read this next: 14 Awesome Comedies That Never Got Sequels

The post 29% of Fans Said This Was the Best Season of Schitt’s Creek appeared first on /Film.

‘Slash Film: The 14 Greatest Heist Movies Of The 21st Century’

EVERY LAST ONE OF THEM Redbox Code Giveaway