The first episode of Marvel’s new Loki series is available now on Disney+. The series wastes no time tossing us into the thick of the new agency known as the Time Variance Authority, throwing a lot of information around about “The Sacred Timeline” and variants and multiverse wars. But there are almost surely some hidden details and Easter eggs you missed in the first episode, titled “Glorious Purpose.” Don’t worry: we’ve handpicked the most intriguing, fascinating, and cool Loki Easter eggs to highlight here. (You know, so you can look smart in front of your friends when you watch!)

Before we begin, we’d just like to clarify that Easter eggs are not clear and obvious references to the comics that Marvel Studios is adapting. Take a spin around the internet and you’ll see plenty of articles labeling Mobius M. Mobius and the Time Variance Authority as Easter eggs. Those aren’t Easter eggs. For some real Easter eggs, keep reading below.

And naturally, this post contains spoilers for the first episode of Loki.

After Loki watches the film strip of his life right up to the point where he’s killed by Thanos in Avengers: Infinity War, the film strip becomes unspooled from the reel. If you’re paying close attention, you can read the label at the end of it. Alongside his full name Loki Laufeyson, it says “ETH-616,” which is an abbreviation of Earth-616, the official designation for the primary universe in Marvel Comics.

If we’re being technical, the world in which those events happen isn’t actually Earth-616. The universe in which the Marvel Cinematic Universe exists is actually Earth-19999, just to avoid any confusion between the movie and comics continuity/mythology.

Mobius can be seen sipping a canned drink throughout his interactions with Loki in this episode. He’s not drinking something specific to the Marvel Cinematic Universe, but he is drinking something that only a man like Mobius could get his hands on. It’s Josta Cola, the first-ever energy drink that was marketed in the United States back in 1995. PepsiCo was behind the popular drink, but it only lasted four years and was discontinued in 1999. Does Mobius have a fridge full of this somewhere or does he have to keep traveling back to the ’90s to get it?

When Loki watches that animated PSA with Miss Minutes explaining the existence of the Time Variance Authority, the Time Keepers, The Sacred Timeline and all that jazz, she also explains something called a “Nexus Event.” This is a point in reality wherein an event occurs that causes the timeline to branch off, potentially creating a multiverse and possibly another war between several branches of time.

But this isn’t the first time that we’ve heard the term Nexus thrown around. You might remember that one of WandaVision‘s fake commercials dealt with a depression medication known as Nexus, which fans took as a reference to Scarlet Witch being a “Nexus Being” in Marvel Comics. However, with this explanation of Nexus Events in Loki, could Wanda Maximoff be on the verge of creating a Nexus Event of her own?

When Loki’s TVA file is briefly shown on screen, you can read some of the details. The most intriguing one, besides reminding us that his full name is Loki Laufeyson, is that his gender is fluid. This is something that was so cool that we broke it out into its own story earlier this week after it popped up in a TV spot for Loki. Since Loki is a shapeshifter, his gender is inherently fluid, and this is something that has long been established in Marvel Comics, but seeing it become canon in the MCU is a nice bit of modernity in this era of superhero movies. 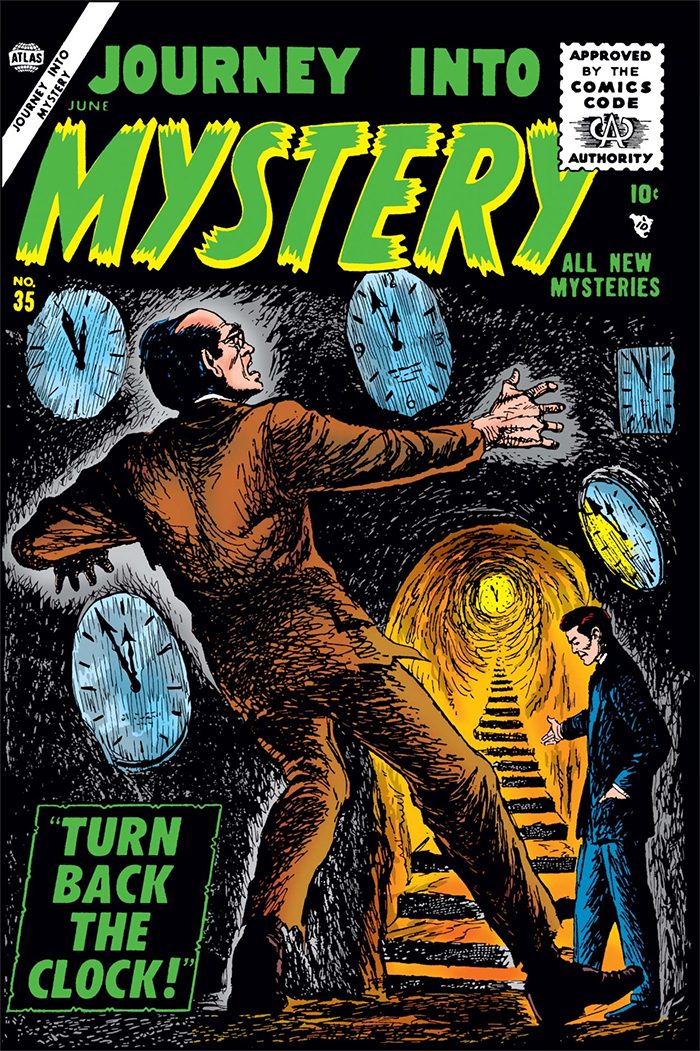 When Mobius is showing Loki his life on a film reel, the holoprojector has the number “35” on it. This is most likely a reference to Marvel’s Journey into Mystery comic #35. Not only is this the comic that eventually turned into the Thor series, but it’s an issue called “Turn Back the Clock,” which seems all too appropriate to be a coincidence.

Take Me Out to the Ballgame

One of the most pivotal moments of the series so far is when Loki realizes that items like the Tesseract and Infinity Stones are not viewed as sacred, powerful items in the TVA. They’re used as paperweights, and no one cares about their existence unless they disrupt the flow of time. If you looked in the drawer holding these Infinity Stones, assembled like toys taken from kids at school, there’s a Honus Wagner baseball card, one of the most valuable cards of all time. It’s also sitting next to a $5,000 casino chip, indicating that there are plenty of people like Biff Tannen in Back to the Future Part II who just want to get rich quick and will abuse time travel to do it.

A Weapon from the Third Millennium

At the end of the episode, a unit of TVA agents arrives in Salina, Oklahoma in 1858. Before they’re set ablaze by the variant they’re hunting, they scan a futuristic shovel-like device sticking out of the ground. Their little TVA tablet tells them it’s from the early third millennium. Do you know who comes from the year 3000 in Marvel Comics? None other than future Ant-Man and the Wasp: Quantumania villain Kang the Conqueror. That also just so happens to fit in with another potential Easter egg.

This could potentially be the biggest Easter egg of them all. In the animated PSA introducing the Time Variance Authority and The Sacred Timeline, we’re shown the three Time Keepers. First of all, the animation style feels like a direct callback to the style of artwork in Marvel Comics from decades ago. But that’s not the Easter egg we’re talking about. Take a look at the Time Keeper in the middle with the blue face. Now take a look at Kang the Conqueror:

It’s not a spitting image, but the blue face does seem to be a dead giveaway. Here’s another interesting detail: in Marvel Comics, Kang the Conqueror is in love with a character named Rayonna Renslayer. It just so happens that’s the name of Gugu Mbatha-Raw‘s TVA judge character in Loki. What are the odds that whatever is happening with this variant being chased by Loki and Mobius is some kind of inside job involving Renslayer? That would explain why she’s so apprehensive about letting Mobius recruit Loki, perhaps concerned that a potential nefarious plan could be foiled.

Here’s that animated Time Keeper next to actor Jonathan Majors, who is set to play Kang the Conqueror in Ant-Man and the Wasp: Quantumania.

Kang the Conqueror had plenty of run-ins with the Time Variance Authority in Marvel Comics, and since time travel and the Quantum Realm go hand-in-hand, we wouldn’t be surprised if there’s something going on in Loki that will end up having an impact on yet another Marvel Studios sequel.

That’s all for now. Thanks to ScreenCrush and Nerdist for some helpful details. Come back next week for another round of Loki Easter eggs from the show’s second episode.

The post 8 ‘Loki’ Easter Eggs and What They Could Mean for the Marvel Cinematic Universe appeared first on /Film.

/Film – ‘Slash Film: 8 ‘Loki’ Easter Eggs and What They Could Mean for the Marvel Cinematic Universe’
Author: Ethan Anderton
Go to Source
June 10, 2021

‘Coming Soon: Gossip Girl Reboot Trailer Takes You Back to The Upper East Side’