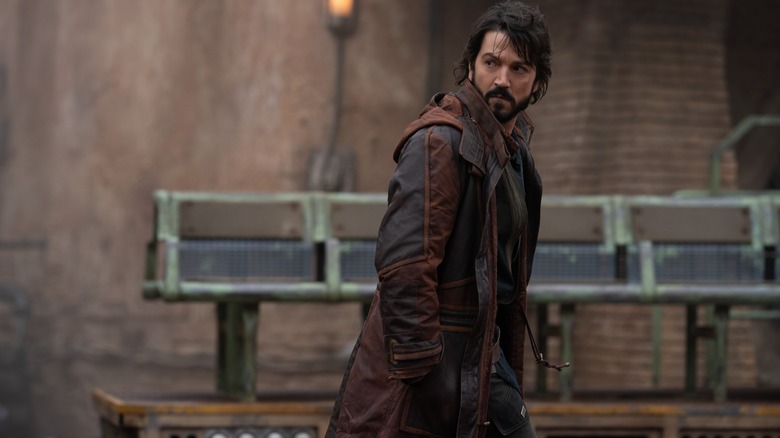 There will be spoilers for “Andor” Episodes I, II, III.

Starring Diego Luna in the title role, the first three episodes of “Andor” quite loudly says from the very first scene that this isn’t the sort of “Star Wars” you’re accustomed to. The first three episodes tell the beginnings of a story with Cassian Andor in two different timelines. In Cassian’s early days, he’s trapped with other children on an Imperial mining planet, the site of a disaster that has killed most of the folks there. In Cassian’s present, he’s on an industrial town just outside the jurisdiction of the Empire, working to find his lost sister and to make a score big enough to get off planet and away from the trouble he’s in after accidentally murdering a pair of local corporate authorities.

As part of Cassian’s plan, he steals an important bit of Imperial technology that would be invaluable to anyone working against the Empire. While he works to make a sale on this MacGuffin to a secretive rebel agent named Luthen Rael (Stellan Skarsgård), the local authorities — acting against their orders — close in on Cassian, forcing him to abandon everything behind and trust this new contact who doesn’t actually want the MacGuffin, but Cassian himself, seeing a valuable intelligence asset.

This is intercut with a view of Cassian’s past, where he’d been orphaned due to Imperial malfeasance and was practically abducted by a new, adoptive mother, Marva (Fiona Shaw). Both stories culminate in a closed chapter behind Cassian and a new life ahead of him, shutting the door on two different eras of his life.

The Slow Deliberation Of ’70s Cinema 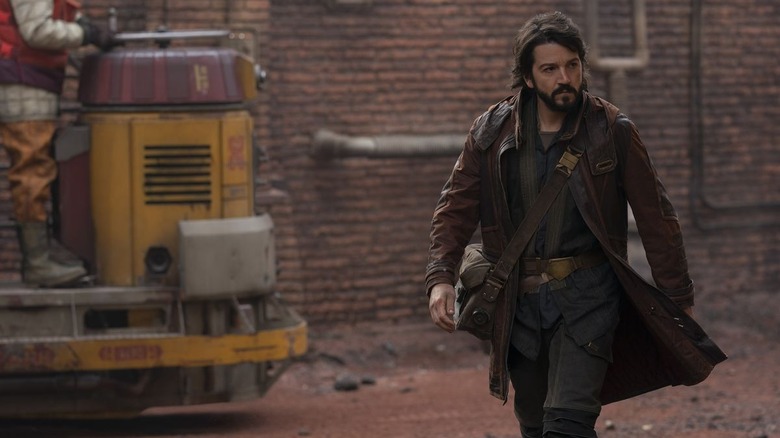 Tony Gilroy brings more of himself than “Star Wars” to “Andor,” and part of that is the slow, deliberate pacing of the drama. At many times, “Andor” feels as though it could have been written by Paddy Chayefsky and directed by Sidney Lumet. These are not complaints, it simply caught me off-guard because I expected a little more swashbuckling.

It makes sense, though. When we meet Cassian at the beginning of “Rogue One: A Star Wars Story” he is a cold-blooded intelligence agent, murdering his contact before our eyes. This still-ruthless Cassian from the beginning of “Rogue One” is the one we’re watching him grow into, so naturally he’s going to have a more Travis Bickle-like backstory from his earlier days. Like Martin Scorsese’s “Taxi Driver,” “Andor” is full of the pain of a character struggling through and trying to find a path for himself and connection to others.

But there’s also an element of great ’70s spy cinema, too. The story is moves at a deliberate pace and it makes sense seeing all three episodes together why they would release them at the same time. There’s not a whole lot of payoff in those first episodes until you reach the finale of the third — a self-contained movie to kick off the first arc of Cassian’s intertwining stories, past and present. 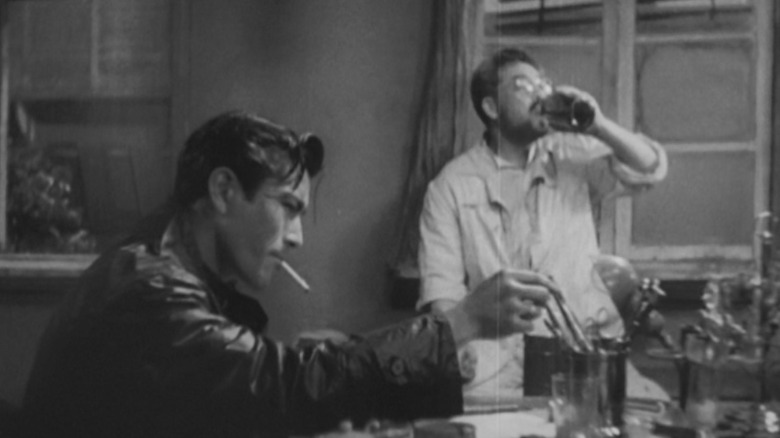 One thing that “Star Wars” projects always seem to have is a touchstone in the work of Akira Kurosawa. Lucas famously borrowed elements from “The Hidden Fortress” for the structure of “A New Hope” and, more directly, for “The Phantom Menace.” The samurai aspects of Kurosawa’s ouevre have been present in “Star Wars” from the first time we met a Jedi and saw their garb and dogmatic honor-code. “Andor” really doesn’t have anything like that.

“Andor” is full of the same gray morality that fills the space between black and white noir films. If there’s a film of Kurosawa’s that “Andor” feels like it’s taking its cues from, it would be the 1948 post-war noir “Drunken Angel.” The planetary systems that Cassian occupies feel very much like the bombed out Tokyo suburb that Kurosawa lays the scene in for “Drunken Angel” a commentary about a people trying to rebuild after the devastation wrought on them by the war. Diego Luna captures the same fatalism as Toshiro Mifune in his role as a young gangster suffering from tuberculosis. Stellan Skarsgård is the Takashi Shiumura-like older counterpart trying to inspire some greatness in the younger man. There are many differences, to be sure, but this feels like the touchstone that would help people understand the difference in tone between this “Star Wars” and the rest of “Star Wars,” the same way one would point to Kurosawa’s samurai epics and his noir masterpieces.

Details To Watch Out For 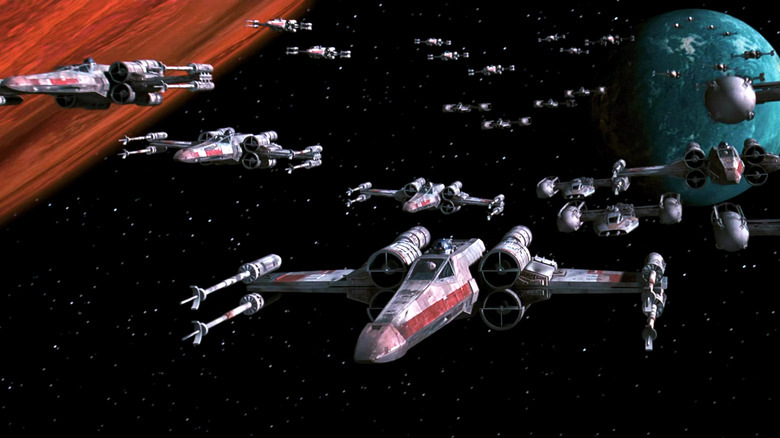 Since the first three episodes of this show are set so far away from the center of the galaxy and galactic politics, there aren’t a whole lot of things to look for, but that doesn’t mean there are none.

The first thing to notice is that the show very boldly proclaims that it happens in BBY 5. I believe this is the first time we’ve seen on screen a nod to the dating method that sets these events before the battle of Yavin. Immediately, it starts with a countdown clock toward Cassian’s eventual doom.

There are other ties to “Rogue One” as well. Early in this arc, a character mentioned a need to go on a run to Wobani. Wobani is the Imperial labor planet where Jyn is being held at the beginning of “Rogue One” from which K-2SO gleefully rescues her.

The MacGuffin in the episode (and perhaps the series), the mysterious Starpath unit, is a reference to something created by Michael A. Stackpole in the book “I, Jedi,” that was a piece of technology aboard the former Imperial Star Destroyer the Errant Venture.

Another thing to note is that Luthen’s ship is a Fondor Haulcraft. Fondor was a planet first introduced in James Luceno’s book “Tarkin” and contains a multitude of orbital shipyards critical to the Empire. A vital battle was held there in the game “Battlefront II” that players were invited to participate in. The fact that Fondor is so important to the Empire might have Cassian thinking twice about who he is dealing with.

The last fun thing to spot is the toy Bantha in Cassian’s room. I’m not sure why seeing these little Galaxy’s Edge style toys in the live-action universe delights me so much, but it does. 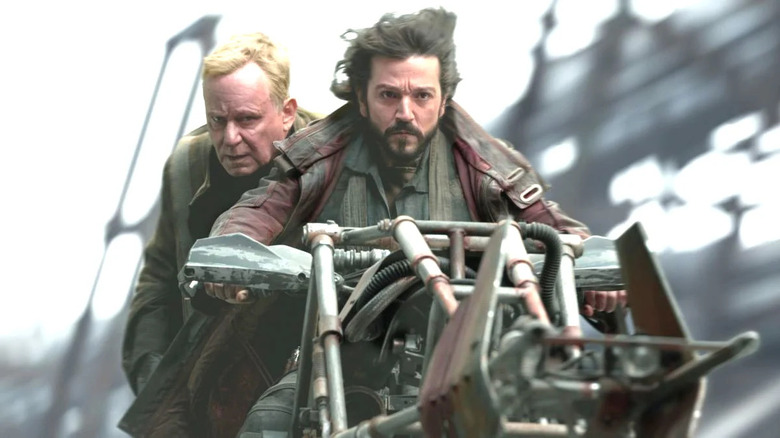 “Andor” is a terrific drama, but it doesn’t feel as though there’s anything necessarily “Star Wars” about it at this point. With the touchstones to tone, style, and feeling skewed so far away from George Lucas’s original intent and stretched even further beyond where he took the franchise, “Andor” is definitely something new. It’s compelling drama full of antiheroes and unlikable characters and it feels like its biggest saving grace is that these characters will have arcs that propel us forward into “Rogue One.” This is not to say the show is bad. Anything but. It’s terrific, but it is a bit of a square peg in the round hole of a galaxy far, far away. It’s going to be enjoyable to more adult audiences, but it leaves behind the adventure kids would be interested in. Perhaps I’m wrong, but I feel like I would be as likely to convince an 8-year-old to sit through an entire viewing of Sidney Lumet’s “Network” as I would “Andor.” And with a show that opens in a brothel, would I want an 8-year-old to watch it with me?

As a fan of ’70s gritty cinema, and as a fan of “Star Wars,” this blend of drama in my favorite universe feels tailor made to me, but I wonder if I’m enough. But the thing I’m learning about “Star Wars” is that there is a different entry point for everyone and why not include a superbly scripted, slow burn drama into the mix?

Because that’s exactly what “Andor” is. A superbly scripted, slow-burn drama. It stacks up against all of the best genre drama on television and, thanks to Gilroy’s incredible guidance and writing, elevates it above most of them. It endeavors to say something, and it does it well. There are streaks of modern-day sentiment about police and their brutal overreach and zealousness, and it says something about what ordinary people ought to do in the face of fascism. Maybe this is the “Star Wars” we would have gotten if Martin Scorsese had directed it on the heels of “Mean Streets” instead of George Lucas. Not a bad thing, but certainly different.

Read this next: Star Wars Characters That Are More Important Than You Knew

The post A Deep Dive into Andor’s First Arc, and What It Says About the Star Wars Universe appeared first on /Film.

/Film – ‘Slash Film: A Deep Dive Into Andor’s First Arc, And What It Says About The Star Wars Universe’
Author: Bryan Young
Go to Source
September 21, 2022

‘Slash Film: The Great North Made A Big Bet By Writing A Role For Alanis Morissette’