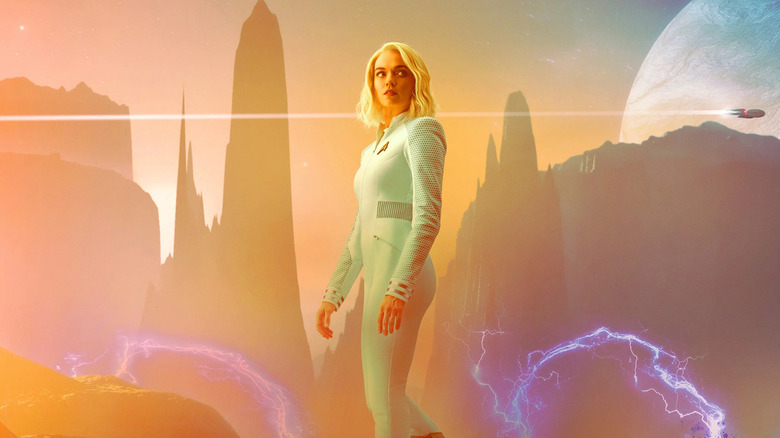 If you’re exploring the galaxy, it tends to be a good idea to keep an open mind. “Star Trek: Strange New Worlds” showcases new characters and highlights others that only had a brief appearance in the original series, but it’s also looking to show us new sides of old favorites. Those old favorites include mainstays like Spock and Uhura, but also the lovely Nurse Christine Chapel, one of the most frequent recurring characters in “Star Trek.”

If Dr. Leonard “Bones” McCoy was the face of medicine on the Enterprise, then Nurse Chapel was his right-hand woman. In “Strange New Worlds,” Chapel has a similar position, as the head nurse supporting current chief medical officer Doctor M’Benga. She has a long history with the crew of the Enterprise, so let’s take a look at Chapel’s previous medical adventures on “Star Trek” and its subsequent films.

Nurse Chapel first appeared in the first season of “Star Trek” in the classic episode “The Naked Time.” She was played by Majel Barrett, who had starred in the unused pilot episode as Enterprise second-in-command Number One. In the episode, the Enterprise is infected by a mysterious contagion that causes the crew to lose control of their emotions. Earlier in the episode, Chapel is seen assisting McCoy with surgery, though the young away team member doesn’t survive the procedure.

As the contagion takes over the ship, Chapel makes a noticeable impact when she confesses her love for Spock. It’s a lot, considering that the audience had never seen her prior to this episode! Spock lets her down while trying to remain in control of his emotions. Chapel’s love for Spock would remain a consistent part of the character for the rest of the original series, even becoming a facet of the animated show.

Chapel would get the chance to kiss Spock in the third season of “Star Trek,” but it did come at the hand of alien mind-control. “For so long I’ve wanted to be close to you. Now all I want to do is crawl away and die,” she noted in the episode “Plato’s Stepchildren,” before having to kiss Spock. It’s not great!

Going To The Chapel And Not Getting Married 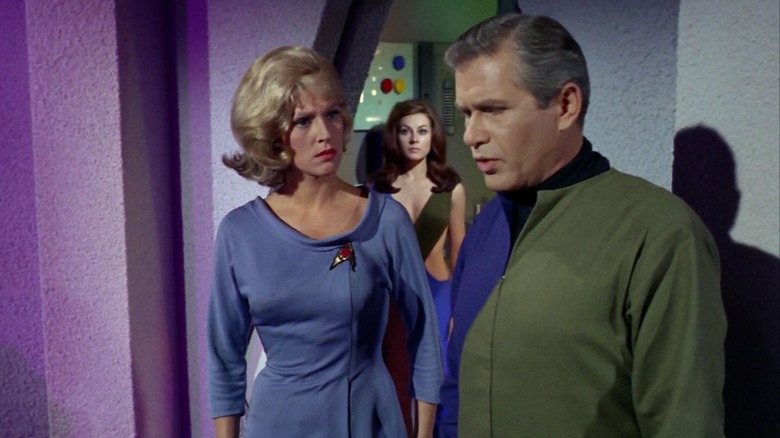 Chapel continues to be a key part of the first season of “Star Trek” with the episode “What Are Little Girls Made Of?” The crew heads to the planet Exo III to uncover the last whereabouts of Dr. Roger Korby, a scientist who just happens to be Chapel’s fiancee. Despite his last message coming five years ago, they find he’s actually still down on the surface.

Chapel meets up with her former fiancee, but he seems slow to remember her. This is “Star Trek,” so you know that scientific shenanigans are afoot! Korby shows Kirk and Chapel the android simulacrums that he’s creating, which should set off red flags for Chapel, but doesn’t. Later, he’s revealed to be an android himself, which puts a kibosh on that whole fiancee thing.

The intriguing thing about this episode is that it’s almost entirely just Kirk and Chapel with the guest stars. Despite that, Barrett was still not a series regular for “Star Trek” at any point. She appeared in 25 of the 79 episodes of the original series, but never rose up the ranks in the cast.

The Ship’s Doctor Of The Mind 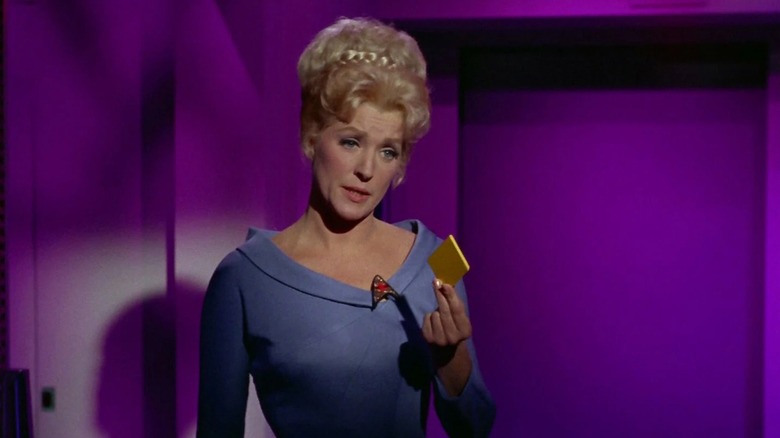 Long before “Star Trek: The Next Generation” had Counselor Deanna Troi to help with the crew’s mental maladies, “Star Trek” did somewhat acknowledge the need for mental health professionals. The Enterprise did have a psychiatrist, Dr. Elizabeth Dehner, but she joined the ship and died in the same episode. Another crew member, Dr. Helen Noel, was also trained in psychiatry, but she likewise vanished after her first episode. With all the deaths on the ship over the years, you’d think a ship psychiatrist or psychologist would be high on the list of priorities for the Enterprise.

This is where Nurse Chapel steps in a bit. In a few episodes, Chapel is the one that’s able to help a crew member in mental distress. In the episode “The Changeling,” Chapel is the one who tries to help Uhura when she loses her memories to an errant probe. In “Obsession,” she’s also the one who reaches out to an ensign struggling with the guilt of not firing on a Vampire Cloud that kills his fellow crew members. The ship clearly needed a full-time mental health professional, but Chapel at least tried to step in when needed. 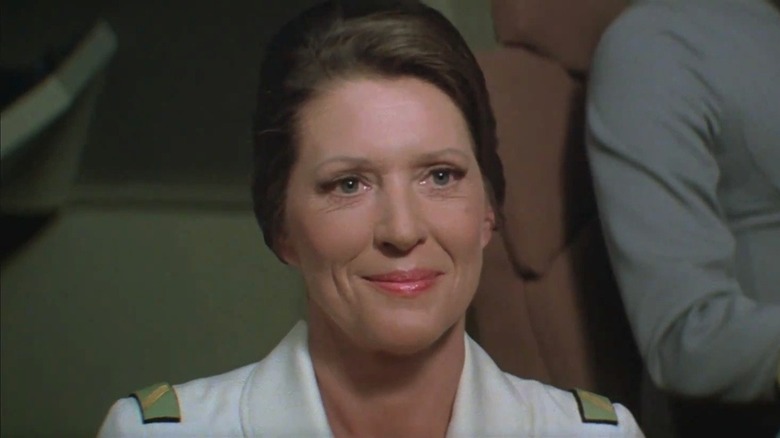 With the advent of the animated series, which continued the five-year mission of Kirk’s Enterprise, Chapel was appointed as head nurse. Barrett reprised her role as Chapel, also handling a number of other alien voices, including the new cat-lady communications officer Lieutenant M’Ress. Chapel gets a promotion to lieutenant in the animated series.

When we see Christine Chapel again in “Star Trek: The Motion Picture,” she’s finally become a full Doctor while still remaining assigned to the Enterprise. Finally, on the last leg of our journey through her history, Chapel appears in “Star Trek IV: The Voyage Home” as a Commander assigned to Starfleet Headquarters. Sadly, she doesn’t join her fellow crew members when they steal a Klingon ship and travel back to 20th century Earth to get a humpback whale to stop an alien probe that will destroy 23rd century Earth. Look, I didn’t make any of that up, that’s the plot of the movie.

Anyways, Commander Chapel appears at the end of the film when the classic crew are under court-martial for their actions. She cheers when they somehow dodge all the charges — which seems suspect because they definitely did all the things they were charged with — but sadly does not rejoin them when they take the helm of the new USS Enterprise-A.

Doing Some Work On The Chapel 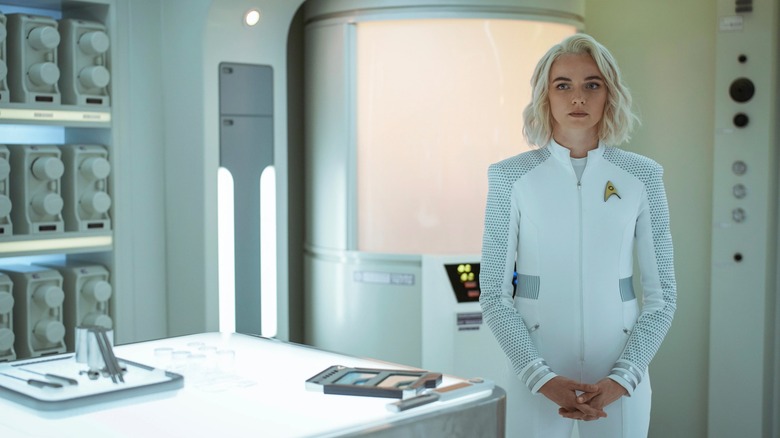 Despite her many appearances, Chapel has a mixed reaction among the fandom. Some feel that she’s only around to be a love interest or damsel-in-distress in many episodes. Barrett herself leaned in this direction.

“She just wasn’t a very exciting character. I didn’t care for her that much,” she said in an interview with Star Trek Magazine, dated July 2000. “She was a namby-pamby type of woman. First, she was a doctor to start, and to go out and find her fiancé she had to take a demotion, probably in rank and pay, because there was already a doctor aboard the Enterprise. This woman’s not too smart; she doesn’t have a whole lot going for her.”

With “Strange New Worlds,” the writing team has the chance to fix some of these complaints about Christine Chapel. Played by Jess Bush, the new Chapel is definitely more wry and feisty compared to her original counterpart. She’s also seemingly more of a scientist, rewriting the genomes of the crew in the first episode of the new series. It helps that she’s also playing off the more quiet and measured M’Benga, bringing some high-energy to this medical team. A teaser trailer also shows her flirting with Spock bit, so I guess not everything is changing. Why mess with the classics?

The post A Short History of Nurse Chapel in the Star Trek Universe appeared first on /Film.

‘Slash Film: Whatever Happened To The Russian On The Sopranos?’