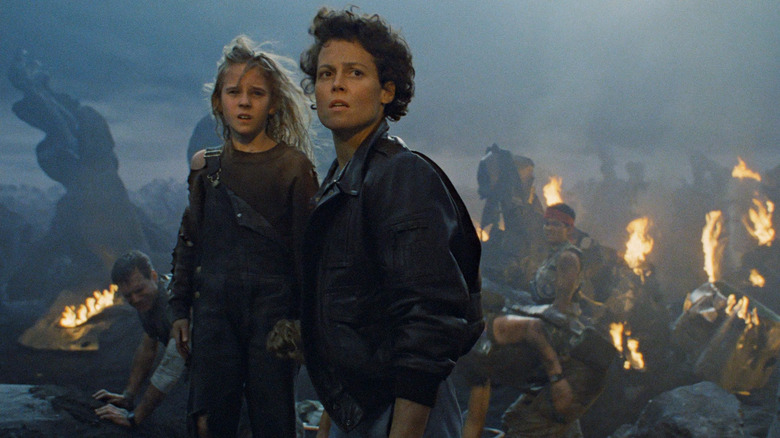 (Welcome to Scariest Scene Ever, a column dedicated to the most pulse-pounding moments in horror with your tour guides, horror experts Matt Donato and Ariel Fisher. In this edition: Ariel breaks down one of the scariest scenes in James Cameron’s “Aliens” that makes her skin crawl, and Matt weighs in with its impact on him.)

“Aliens” is one of those mythical, near-perfect movies you get once in a blue moon. It perfectly demonstrates James Cameron’s masterful grasp of storytelling and exposition coupled with his affinity for exceptional action sequences. And while it is arguably more of an action film than its predecessor, it still falls into the horror category for very obvious reasons. Not least of which include that it’s a creature feature, through and through.

Either I or Matt could sit here and write about the dozens of perfect scares in this film, and maybe we will for its 40th anniversary. But for now, there’s one that … leaps to mind. Well, to my mind, anyways.

An arachnophobe since the age of seven, the facehuggers in the “Alien” franchise have always terrified me. Arguably a bit more than the Xenomorphs, actually. And “Aliens” is full of the little buggers. But it’s the moment when Ripley and little Newt are locked in a room with two of them that never fails to make me jump five feet in the air and scream, reflexively covering my mouth.

Naturally, I’m also talking about the Director’s Cut. Just to be clear. 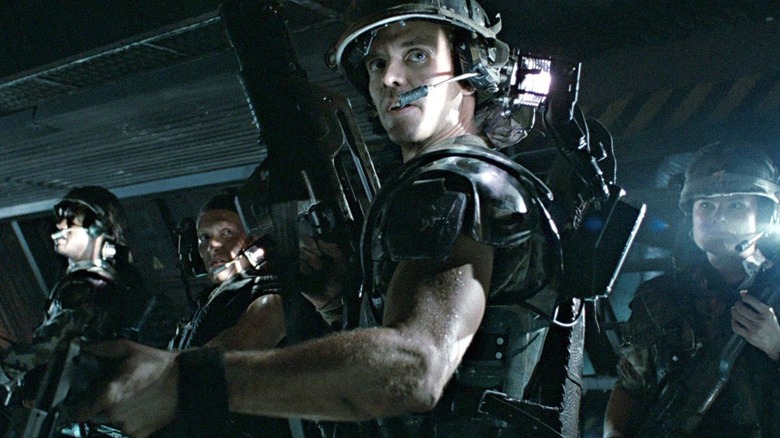 Set 57 years after the events that took place on board the Nostromo in Ridley Scott’s 1979 sci-fi horror classic, Ellen Ripley (Sigourney Weaver) is woken from stasis only to be held personally (and financially) responsible for the destruction of the salvage vessel. When communication is lost with the colony on LV-426, the Weyland-Yutani Corporation recruits Ripley to help guide the Colonial Marines on an investigative mission. After escaping the Xenomorph that killed her entire crew, Ripley must go back and face whatever hell’s been unleashed. 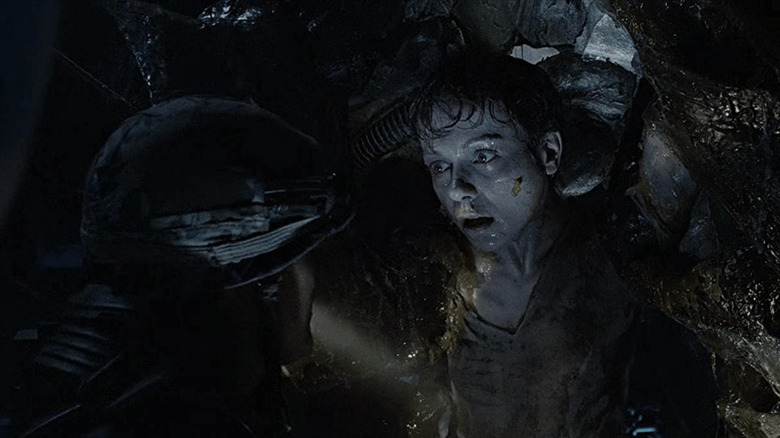 Ellen Ripley is found drifting through space by a salvage crew. She’s been floating aimlessly in the shuttle she used to escape the Nostromo, in stasis this whole time. When she’s woken up, she learns it’s been 57 years since she escaped the Xenomorph, and her entire family has long since passed, including her daughter. Tragically, Ripley had promised to be back in time for her 11th birthday. After being debriefed by the powers that be at Weyland-Yutani, her employers five decades prior, she’s held personally responsible for the damage that was done to their salvage vessel. Despite her claims of an alien lifeform decimating the entire crew and necessitating the destruction of the vessel, they don’t believe her. She’s stripped of her license and relegated to menial jobs during a probationary period.

That is until she’s needed.

When the company loses communication with its colony on exomoon LV-426, where Ripley’s crew originally encountered the alien, they need someone to help them navigate an investigative mission. At first, she refuses. But her nightmares won’t let her rest. So she gives in to the requests of Weyland-Yutani rep Carter Burke (Paul Reiser) and Colonial Marine Lieutenant Gorman (William Hope) and says yes.

They leave without further delay, and we meet the rest of the Marines as everyone wakes from their travel stasis. The group is full of militaristic misfits, none of whom seem to work well together as a whole. They’re all rowdy and rambunctious, which you’d expect, but none of them seem to have that good of a work ethic, respect for one another, or for their commanding officers. Speaking of which, Gorman has next to no experience and Sergeant Apone (Al Matthews) looks like he’s been off duty for some time. On top of this all, there’s an android on board named Bishop (Lance Henriksen) that Burke didn’t tell Ripley about, despite having read her file extensively.

Arguably, the whole film is a critique of colonialism, but I digress. Another article for another day.

They get to the moon’s surface and find the entire colony deserted. They find what looks like the remnants of a battle, and, eventually, two live facehuggers in containment tubes surrounded by several dead ones. They also find a single solitary human: a little girl who calls herself Newt (Carrie Henn). Following the news of the loss of her daughter, Ripley instinctually forms a maternal attachment to Newt, becoming the only person she’ll talk to or trust. Her parents are dead, and so is her little brother. They were all attacked, and she managed to survive.

They make their way into the atmosphere processing station where they find the colonists cocooned in these strange casings. Before they have time to figure out what’s happening, one of the still-living colonists cries out for help as their chest begins to throb. They plead to be killed as a baby Xenomorph rips through their chest. Suddenly, dozens of full-grown Xenomorphs descend on the marines en masse, absolutely decimating the team. Ripley takes control of the situation and charges in to rescue those who are left alive. In their attempt to get to safety, a Xenomorph snuck aboard their dropship, killing the pilot and destroying the ship, stranding the survivors without adequate resources or defenses.

Through all of this, Ripley discovers that Burke had sent the colonists, Newt’s parents, to find the derelict ship Ripley had told him about in her report in order to bring back specimens and make a tidy profit. The plan clearly backfired. But before Ripley can tell the others, Bishop alerts them all that the dropship crash caused significant damage to the power-plant cooling system, and they have a finite amount of time to leave the colony before it explodes.

As Bishop devises a plan and puts it into action, Ripley decides to check on Newt in the med lab, where they both fall asleep.

Ripley wakes up, immediately noticing two open and empty containers on the floor by the door to the med lab. They used to house live facehuggers.

“Newt, wake up,” Ripley gently says to the little girl, nudging her awake. “Be quiet. We’re in trouble.”

From behind the bed, Ripley pokes her head up and out to scan the room for danger, only to have a facehugger immediately lunge at her head. She flips the bed, scrambling to get both her and Newt to their feet.

The door is locked and won’t open.

They bang on the glass doors, but no one can hear them.

Ripley flails her arms in front of the security cameras, hoping Corporal Hicks (Michael Biehn) will see them. Burke stealthily turns the monitor off before anyone can see them screaming for help.

She desperately tries smashing the glass with a chair, to no avail. Something unseen is scrambling around the room.

“Me, too,” responds Ripley.

Then, an idea strikes as Ripley grabs the lighter from her pocket and sets off the fire sprinklers in the lab, getting the marines’ attention. Any minute now, they’ll be safe, as Hicks and co rush to the med lab.

Seemingly out of nowhere, one of the facehuggers lunges at Ripley from the ceiling. She falls to the ground, throwing the arachnid-like creature across the room, scrambling backward as it charges towards her. Newt screams as the facehugger tightens its grip around Ripley’s neck. As the second creature sneaks up next to the little girl, she quickly pins it between the wall and some medical equipment.

Then, the cavalry arrives. Private Hudson (Bill Paxton) comes to Newt’s rescue, obliterating the facehugger, while Hicks, Gorman, and Private Vasquez (Jenette Goldstein) wrestle the other one off of Ripley. In a collaborative effort, they peel the alien’s finger-like legs away from Ripley’s face, struggle to uncoil its tail from her neck, and destroy it.

Ripley is able to catch her breath just long enough to gasp out “Burke! It was Burke!” 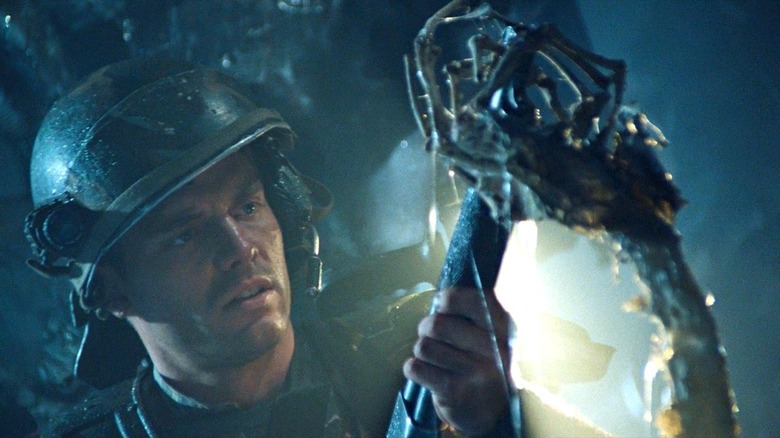 Facehuggers will forever be the champion extraterrestrial foe in any “Alien” movie because we know what happens when embryos are implanted. John Hurt’s juicy, rib-crunchy, unorthodox birthing of a wee Xenomorph is enough to label facehuggers a nightmarish no-no, which is why this sequence is so breathlessly tense. Ripley and Newt flee facehuggers in a confined, pressure-locked space where no one can hear them scream. One false move and organs become incubators for eventual younglings that will chew, thrash, and burst through their chests like a gnarly jack-in-the-box.

The facehuggers themselves are no more than wriggly, rubbery props you can tell are puppeteered by less than novel means. Their movement isn’t that spectacular, which speaks more to their intimidation on reputation alone. They can look like cosmic Party City items on display, and still, in the context of “Aliens,” strike fear into audiences and badass interstellar heroines alike. Burke even brings the ugliness of humankind into the equation by favoring profits and smuggled species over the lives of Newt and Ripley. Real bummer move.

I’ll admit there’s another scene that gives me more of an excitable rise (where my “Call of Duty: Warzone” players at with heartbeat sensors?), but this hide-and-freakout earns its shivers. More sensitive viewers will get their jump-scare jolts, while the threat of ingested Xenomorph minis is enough to remind watchers to shut their yaps.

Every franchise entry has its facehugger moment, and “Aliens” sustains its tension behind quivering fingers that interrupt fields of onlooker vision. There’s a reason my only facehugger paraphernalia is a smiling plushy that looks cartoonishly innocent — no need for reminders when it comes to “Pop Goes the Xeno,” a graphic display that even Mel Brooks could only moderately dim on horror scales.

Read this next: The Scariest Scene In Cloverfield Really Pops (Literally)

The post Aliens is One of the Scariest Movies Ever Made – This Scene is One of Its Creepiest appeared first on /Film.

/Film – ‘Slash Film: Aliens Is One Of The Scariest Movies Ever Made – This Scene Is One Of Its Creepiest’
Author: Ariel Fisher
Go to Source
September 10, 2021