In space, no one can hear you roll dice. Well, in space you can’t even roll dice, but we’ll suspend our disbelief for the new Alien board game that will soon let players experience the terror of the 1979 horror sci-fi classic for themselves.

Ravensburger is releasing Alien: Fate of the Nostromo (via BoardGameGeek), a co-op tabletop game that will put players right in the middle of the action of the 1979 Ridley Scott film, in which the crew of the Nostromo is terrorized by a deadly alien. Designed by Scott Rogers and developed by Steve Warner, Alien: Fate of the Nostromo will allow players to either play solo or with up to 5 people, as one of the crew members of the Nostromo. You can also add Science Officer Ash to the game for a “true challenge.” And knowing Ash’s true nature, that does make the story — and the gameplay itself — much more interesting.

The gameplay will require crew members to wander around the ship’s halls to “collect scrap, craft items, and fulfill different objectives.” Some of those objectives involve trading with other players. But one thing that the crew have to look out for his morale: crew will “lose and gain morale as they encounter the Alien and other situations,” and if morale hits zero, everyone loses. To win, players have to complete initial objectives before embarking on “one of five final missions, each with a unique set of requirements.” Whatever this mission is, players must complete it to win.

Alien: Fate of the Nostromo comes with illustrated cards and six sculpted miniatures, including a very cool-looking Xenomorph. The board also features a “rendered isometric view” of the Nostromo. See the miniatures and the cover of the board game below. 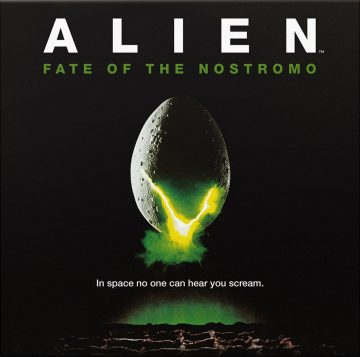 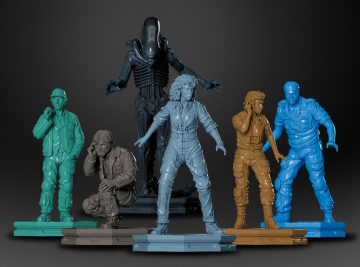 Here is the game description, per BoardGameGeek:

In ALIEN: Fate of the Nostromo, players take the role of Nostromo crew members Ripley, Lambert, Parker, Brett, or Dallas. Over the course of the game, they collect scrap, craft items, and fulfill different objectives. The crew will lose and gain morale as they encounter the Alien and other situations. If crew morale reaches zero, players lose the game.

Each turn has two phases. In the Crew Action phase, players creep through the Nostromo’s halls, gathering scrap, crafting items, trading scrap and items with other players, and using items and their special abilities. Brett, for example, can craft items with one fewer scrap than other players. If the Alien is within three spaces of the player with the incinerator, that player can use the incinerator to send the Alien back to its nest.

In the Encounter phase, players draw and resolve an Encounter card. The Alien could be lurking behind any corner…

Once the players fulfill their initial objectives, they face one of five final missions, each with a unique set of requirements. Players must fulfill the final mission’s requirements simultaneously to win the game. Players can also introduce Science Officer Ash for a more challenging game. Ash moves through the ship, removing scrap and forcing the crew to lose morale.

Alien: Fate of the Nostromo is designed for ages 10 and up. The game, which costs $29.99, will be available August 1.

The post An ‘Alien’ Board Game is Coming to Terrorize Your Tabletop Nights appeared first on /Film.

Ahead Of A24’s Zola, The Movie’s Real-Life Inspiration Clears Some Things Up