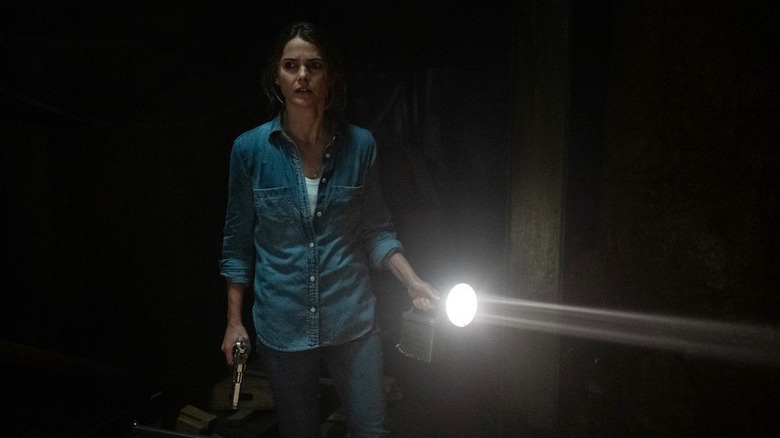 Using the history of Indigenous people as a launchpad for horror is baked into the genre. The Micmac Burial ground from “Pet Sematary” and The Overlook Hotel in “The Shining” both deal with the idea of the fabled “Indian burial ground” – ground so sacred that to disturb it in any way would summon up horrors beyond our wildest beliefs. It makes a certain kind of cosmic sense: settlers came to this land, slaughtered the indigenous people who lived here, and restricted those left to reservations. America is a land built on the bloodshed of the powerless, and there’s long been an idea in certain horror stories that sooner or later, the chickens would come home to roost, and those truly native to this land would have their revenge. But more often than not, these ideas are only touched on a surface level. “We don’t understand native customs,” most of these stories say. “And we’re terrified of what we don’t understand.” Those looking for art that better covers this material should seek out books like “The Only Good Indians” by Stephen Graham Jones, and not expect much from “Antlers,” the strangely inert new horror movie from director Scott Cooper and producer Guillermo del Toro.

Right from the start, narration tells us that “Mother Earth has been pillaged.” The implication is that non-natives came to this land and robbed it of all its resources. The story of Goldilocks and the Three Bears is recited later in a classroom, at which point teacher Julia Meadows (Keri Russell) tells her class the moral of the story: “Don’t take something that’s not yours.” It’s heavy-handed stuff, and while a smarter, better movie might be able to get away with such concepts, “Antlers” stumbles.

Cooper’s film, which is adapted from the much better, much scarier short story “The Quiet Boy” by “Channel Zero” creator Nick Antosca, wants to be more than a horror film. I would never be as crass as to use the boneheaded term “elevated horror,” but it’s clear Cooper wants this film to be a commentary on America as a failed empire; a land where everyone is tired, everyone is suffering, everyone is at the end of their rope. There are glimpses of real-world horrors here – the story is set in a dying coal-mining town in Oregon, and the first scene involves meth dealers at work. Later, Russell’s Julia passes by a pill mill – a quack doctor’s office dishing out opioids. The line for the building stretches down the block. These things come early in the film, and they got my hopes up. I thought “Antlers” might have something to say about all this. But it doesn’t. It just presents it and moves on. It’s window dressing. I appreciate the effort, but there needs to be something more for the type of movie Cooper is trying to make here. 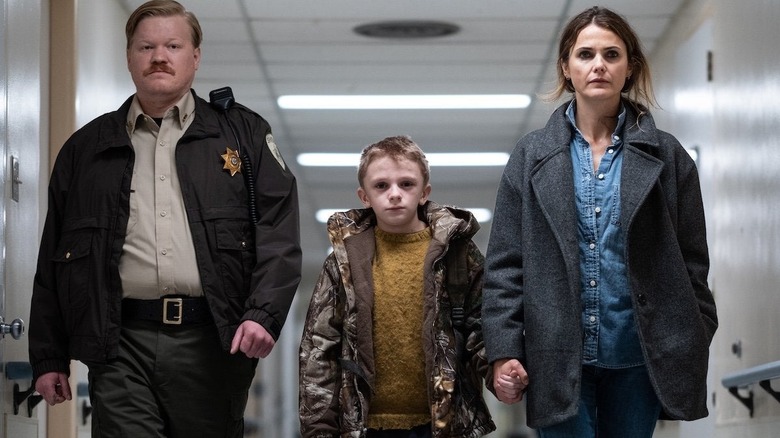 Cooper clearly has a good eye, and Florian Hoffmeister’s cinematography feels appropriate cold and damp – when we see shots of fog-shrouded mountains we can practically feel the hint of rain in the air. Atmosphere is a big part of “Antlers,” and the images Cooper puts together here might be enough to tide some over. The opening moments, where a meth cook wearing a gas mask descends into a pitch-blank mine with a blood-red flare burning as the only light, are appropriately moody. It’s like we’re witnessing some damned soul climbing down into the bowels of hell. That gas-masked figure is Frank Weaver (Scott Haze), a man who is barely scraping by as a meth dealer. His wife is dead and he’s raising two young sons, Lucas (Jeremy T. Thomas) and Aiden (Sawyer Jones). Lucas attends school, and is in Julia’s class. But Aiden, who is much younger, appears to be “working” with his father. As someone explains later, some meth cooks bring their kids into the action to transport certain things, with the hopes that the cops wouldn’t think to search a child. In other words, Frank clearly isn’t the father of the year.

Frank and Aiden encounter … something in the darkness of a mine. Cooper wisely understands that less is more, so it’ll be a while before we really see anything monstrous, and when the monster arrives, it doesn’t disappoint. The creature design here is splendid, all bony limbs, sharp antlers, and wet, glistening flesh. This is the Wendigo, a creature that springs forth from the myths and stories of the First Nations. The Wendigo is another Indigenous concept that gets used in horror often: Stephen King mentions it in the “Pet Sematary” novel, and Larry Fessenden’s eerie “Wendigo” uses the myth as a kind of psychological torment. The creature is thought of as an evil spirit that possesses people and turns them into cannibals. “Antlers” takes things a step further, turning the Wendigo into something akin to the Xenomorphs from “Alien,” complete with a period of incubation within some hapless human. Not particularly original, sure, but it’s effective and suitably nasty stuff.

But again, Cooper fails to go beyond the surface here. There’s a scene where a character who might as well be listed in the credits as “Wise Old Native Who Provides Exposition” (played by Graham Greene, who does the best he can with such a limited part) gives a quick rundown of the Wendigo. “That’s a myth!” someone replies. “To you, maybe,” Greene’s character intones ominously. And then he pretty much vanishes from the film, having done his duty to fill the audience in. To be clear: I’m not expecting a movie like this to delve into the minutia of such legends, but it would be nice to have something more detailed, more thoughtful, more thematic. I get the distinct impression that a version of the film with those details exists somewhere, and that film has been cut down to this quick, short monster movie (there are more than a few scenes and shots shown in the “Antlers” trailers that are nowhere to be seen here). Producer Guillermo del Toro is a big fan of monsters, and I can’t help but think that if he had helmed the film we’d be treated to a much richer experience.

…But It Doesn’t Feel Right 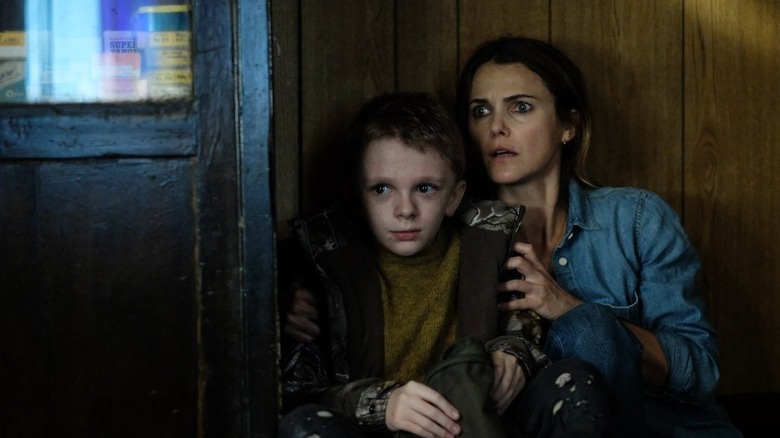 When Lucas starts showing up to class looking tired and malnourished, teacher Julia becomes concerned. She suffered abuse in her past at the hands of her father, and she thinks she can recognize abuse when she sees it. Julia, like everything else in this movie, is barely there; we get hints about her – she eyes liquor bottles in the store with longing but doesn’t buy them; she carries guilt around for fleeing her abusive home and leaving her brother, the town sheriff (played by Jesse Plemons, severely underused here), behind. Still, when Julia starts snooping around spooky locations with flashlights like she’s in an episode of “The X-Files,” it doesn’t feel right.

Back at his ruined house, Lucas keeps his father and younger brother locked up in a room, feeding them roadkill. Father and brother are sick, infected, and slowly falling apart, and Lucas, just a child, is doing the best he can to help them. But he can only keep this up for so long, and soon, Julia, her brother, and other characters come calling. And then the body count begins to rise. People are torn apart, obliterated, rendered into wet, gristly pulp. The practical effects used to show us these cataclysmically dismantled bodies are all top-notch, and again: maybe that’s enough. Maybe the gore and grime coupled with the ominous-yet-gorgeous cinematography are all that’s needed to convince people that “Antlers” is a fine new horror film.

But just when the film feels like it’s about to really get going, and unleash something really scary on us, it ends, not with a bang but with a whimper. The surviving characters seem to have learned nothing. There’s nothing to take away from this story. It just happened, and all that’s left to do is shrug. A movie with an ancient spirit tearing people limb from limb shouldn’t seem so dull, so undercooked, and yet, here we are. Maybe we’ll get a director’s cut one day, and it’ll fix all of this. Or maybe not.

The post Antlers Review: This Atmospheric Monster Movie is an Undercooked Disappointment appeared first on /Film.

‘Slash Film: Ted Lasso Actor Addresses The Inevitable Hate That Will Come From The Season 2 Finale’