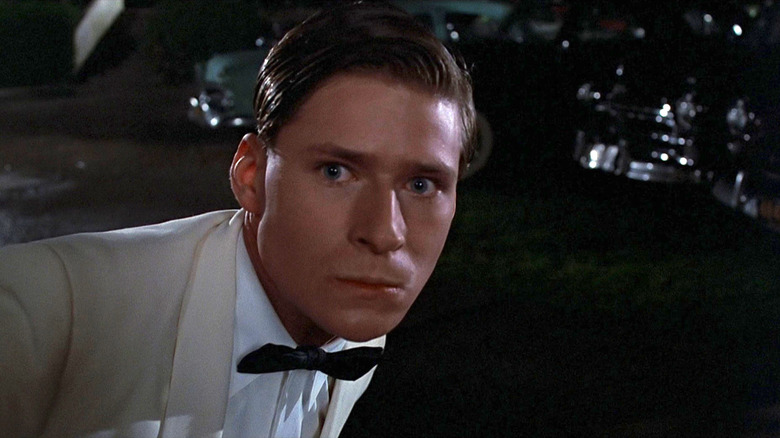 Crispin Glover’s involvement in a hit fit like 1985’s “Back to the Future” is an aberration in his career. Glover is more frequently drawn to the dark, the oblique, the difficult, and the confrontational. A listen to Glover’s 1989 album “The Big Problem ≠ The Solution. The Solution = Let It Be” reveals the artist’s mixed interests in the comedic (“Weird Al” Yankovic and Barnes & Barnes are featured), the pathetic (his rendition of “These Boots are Made for Walking” is little more than Glover screaming and weeping in jealous agony), and the poetic (the album features readings from his collage-cum-abstract poetry books “Oak Mot” and “Ratcatching”).

Tracing Glover’s acting career finds him working with a full roster of the indie world’s more prominent directors, and several notable auteurs besides. Glover has worked with David Lynch, Gus Van Sant, Oliver Stone, Jim Jarmusch, Jerzy Skolimowski, Miloš Forman, Neil LaBute, Arthur Hiller, and, of course, himself, having already made the first two parts of an intended surrealist trilogy called “What Is It?” (2005) and “It is Fine! Everything is Fine.” While he has been involved in multiple “mainstream” films (he was the mute, hair-sniffing thug in McG’s “Charlie’s Angels”), his career has always been more interesting when delving into his more bizarre personae. One will find more of Glover in “Rubin and Ed” or “River’s Edge” than in Robert Zemeckis’ 1985 mega-hit “Back to the Future.” But the time traveling adventure is likely what he’s best known for.

In “Back to the Future,” Glover played George McFly, the father of Marty (Michael J. Fox) who has traveled back in time to the 1950s in order to ensure that his mother and father fall in love as teens, procreate, and give birth to him as intended. George was a gangly, awkward, nerdy guy, and Glover brought a good deal of immensely comedic nervous energy to the character. Marty’s mom was played by Lea Thompson, who finds her romantic interests drifting away from George and more toward, perhaps disturbingly, Marty himself. When it came time to make “Back to the Future Part II” in 1989, however — and, in so doing, revisit the events of the original film using time travel — Glover balked. The complex argument between Glover and the film’s producer Bob Gale left a trail of destruction in its wake.

A Message Of Material Gain 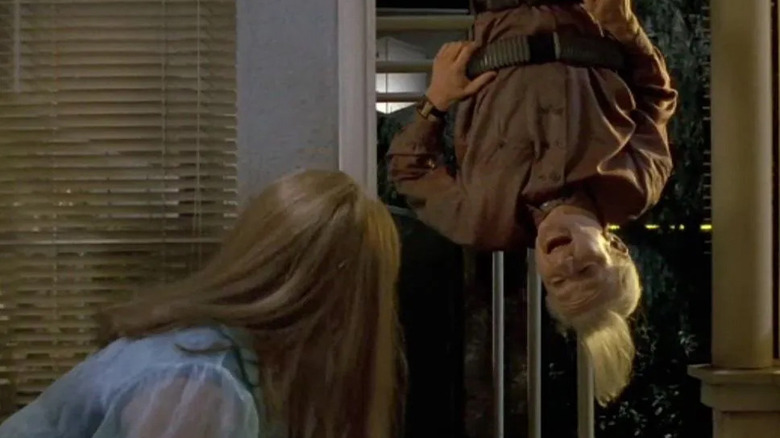 For “Back to the Future Part II,” fans may have noticed that George McFly looked markedly different. Glover had been replaced by actor Jeffrey Weissman, outfitted with facial appliances to make him look more like the original George. There is a notable scene in “Part II” that takes place in the future (2015), and an elderly George comes to visit a middle-aged Marty. George is suspended upside-down by a futuristic, floating medical device that is meant to do something for his back. Hanging an actor upside-down is a good way to distort their features slightly, and some theorized that it was done intentionally to further obfuscate Glover’s recasting nu Weissman. In an interview with Hasslein Books, Weissman said that the script called for Glover to be dangled upside-down “to torture Crispin during the shoot, as payback for the headaches he caused on the filming of the first installment.”

What headaches? Weissman, in the same interview, reports on several snide comments made by Gale and photographer Dean Cundey about Glover’s difficulty. We Weissman sat for his first makeup test, he recalls hearing Cundey say “I think we have Crispin, without the trouble.” Poor Weissman had the thankless role of wearing another actor’s face (quite literally; the makeup they used was taken from a cast of Glover’s features), and he was not welcomed by the returning cast members. Lea Thompson once referred to Weissman as an “imposter.”

Or perhaps the “headache” that Weissman referred to was the fact that Glover, when offered to reprise his role for “Part II,” claimed he hated the script, and wanted far more than the paltry $125,000 the studio offered him. As reported in The Hollywood Reporter, Glover demanded a $1 million paycheck, and Bob Gale outright refused to pay that much. Because Glover has such striking features, it was difficult to recast him, so Gale ended up shooting Weissman in such a way that audiences miiiiight mistake him for the real thing; George McFly is often in old age makeup, or in the background and out-of-focus in “Part II.”

The attempted to “re-create” Glover led to a lawsuit. 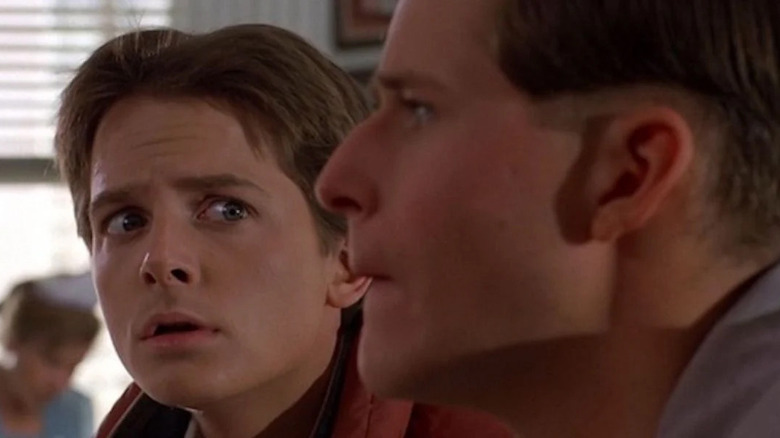 In 1990, Glover took “Back to the Future” to court over infringing on his rights of publicity. It’s expensive to hire publicists, and a stunt like what Gale pulled in “Part II” can miscommunicate to the public what actor is appearing in what film. The studio, Glover claims, imitated his likeness without his consent. Glover has said in interviews that the most infuriating part was Bob Gale refusing to acknowledge that he had done anything wrong.

“[Gale] is obviously unrelenting, he pretends that it isn’t illegal, which amazes me. There’s a classic thing where someone will blame a victim, when they’ve done something. That’s what Bob Gale does. That is incredibly infuriating.”

Here’s Gale on record from Yahoo! News, defending himself:

“We checked with the legal department at Universal, if we had permission to use footage of him from the first movie in the second movie, and they said, ‘Yes.’ And ‘Do we have permission to make another actor resemble him?’ ‘Yes.’ And you see that all the time.”

Gale thought they were in their rights to imitate Glover, and the Yahoo! News story also indicates that Gale saw recasting actors as a common practice, even if two actors are playing the same role in the same film series. Glover, of course, begged to differ. And to add insult to injury, Glover also feels that Weissman gave a bad performance, seeing as it was based on imitation and not character. Had they merely recast George, Glover said, he wouldn’t have had an issue — after all, Claudia Wells was replaced by Elisabeth Shue in “Part II” — but when they decided to make a mold of his face on a new actor, that was one toke over the line.

Glover was successful, however. The studio ended up rewarding him $760,000, and the lawsuit led to new stipulations among the Screen Actors Guild’s collective bargaining agreements. Despite the payout, neither Gale nor Glover has yet stepped in to make peace. They have both been bitter ever since. 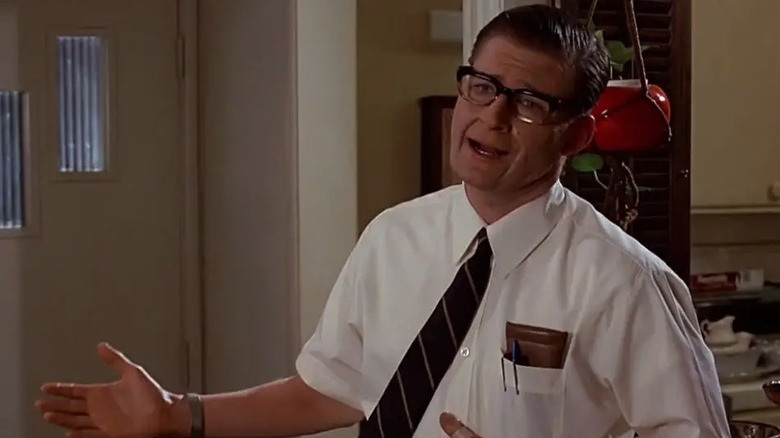 In an interview with Collider, Glover pointed out that, because “Back to the Future” has proven to be a lucrative business franchise decades after its release, Bob Gale continues to find ways to milk it for money. This means more and more opportunities for Gale to repurpose Glover’s likeness again and again and again. Glover has refused time and time again, and has even had to send cease-and-desist letters whenever the studio wants to exploit his likeness for merchandising purposes; there’s a reason you won’t mind any George McFly Funko Pops on the market.

Glover has been waiting for an apology from Gale ever since 1990. Gale has never stepped forward, except to defend his decisions. Gale has said in statements:

“I’m sorry that Crispin is still angry with me. He seems to take it on me personally, I don’t understand why. Everybody at the studio was involved in this decision.”

Glover and Gale may not be speaking, but Glover and Zemeckis did end up working together again. In 2007, Glover acted in motion capture — and spoke line in Old English — in Zemeckis animated film “Beowulf.” Glover played Grendel.

Bob Gale has spent the last few decades banking on the success of “Back to the Future” producing documentaries on its making and receiving credits for video games and fan shorts. Glover has continued to work throughout, now well established as an artist and surrealist. The two seem on very different ends of the filmmaking spectrum, and a meeting of the minds seems unlikely. They will have to make peace — or not — on their own terms. It seems George McFly is pretty good with confrontations after all.

The post Back to the Future Left Crispin Glover and Producer Bob Gale’s Relationship In Shambles appeared first on /Film.

‘Slash Film: Only Murders In The Building Reunion As Steve Martin Invents The Whoopie Cushion On SNL’