Bela Lugosi will rise from the grave to play Dracula once again – in comic book form. Legendary Comics will release a new comic adaptation of Bram Stoker’s Dracula with the Count drawn to resemble Lugosi exactly, with cooperation from the Lugosi family. The adaptation of Stoker’s novel comes from Robert Napton, with art by El Garing and Kerry Gammill serving as art director.

The Legendary Dracula comic was actually announced back in 2019, but now we know when it’ll hit shelves: October 6. The comic promises to be a faithful adaptation of Stoker’s novel that also just happens to feature Lugosi’s likeness. Lugosi made Dracula famous in the 1931 Universal movie, and while it remains one of the most iconic interpretations of the legendary bloodsucker, it’s a very loose adaptation of Stoker’s book.

“There have been great Dracula graphic novels, but to unite Bram Stoker’s novel in a faithful adaptation with the definitive Dracula in the form of screen icon Bela Lugosi is a dream come true,” said Napton (via CBR). “I am grateful to the Lugosi Estate, artist El Garing and art director Kerry Gammill for bringing their passion to this project.”

Bela G. Lugosi, son of Bela Lugosi and the managing member of Lugosi LLC, added: “On behalf of the Lugosi Family, I want to thank Legendary Comics, especially Robert Napton, as well as artists El Garing and Kerry Gammill, for honoring my father with a stunning graphic novel that features Bela Lugosi as Bram Stoker’s Dracula.”

Stoker’s novel is told in epistolary fashion – made up of journal and diary entries, letters, newspaper clippings, and more, all spinning the tale of a group of unlucky Brits who come up against an ancient vampire. It remains one of the all-time-great horror novels and has inspired countless movies and interpretations. Lugosi first played the Count in a stage production on Broadway, and while Universal was not interested in having the Hungarian actor take on the part on the big screen, Lugosi fought hard for the role and ultimately won out. It was a blessing and a curse – it made Lugosi a star, but typecasted him for the rest of his career.

Check out the cover for the Dracula comic below. 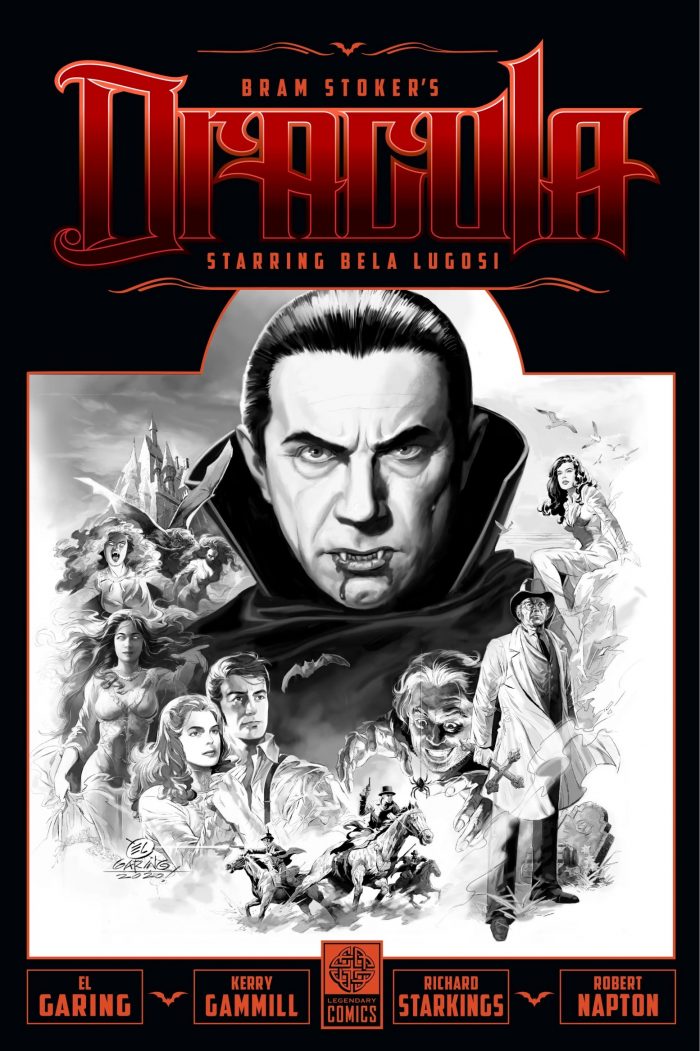