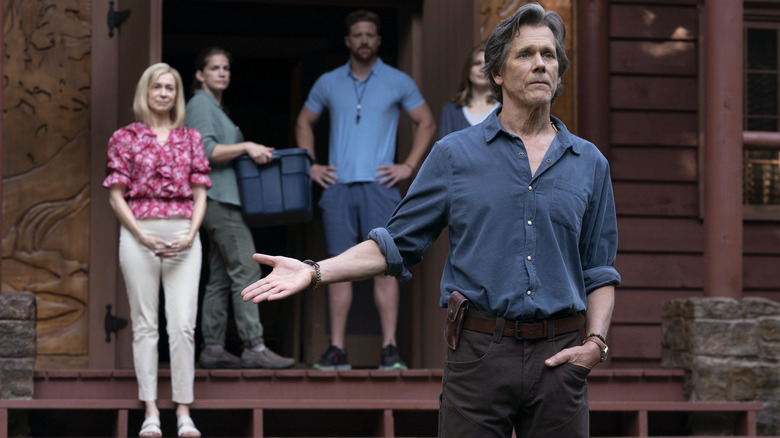 John Logan, the creator of “Penny Dreadful” and three-time Oscar-nominated screenwriter of “Gladiator,” “The Aviator,” and “Hugo,” along with the James Bond films “Skyfall” and “Spectre,” is making his directorial debut with the new Peacock original horror movie, “They/Them” (pronounced “They-slash-Them.”) The press release for “They/Them,” which stars Kevin Bacon, Anna Chlumsky (“Veep”), and Carrie Preston (“The Good Wife”), bills it as “a queer empowerment story set at a gay conversion camp.”

We first heard about “They/Them” last year, when the project was going by the alternate title of “Whistler Camp.” Now, the film’s production company, Blumhouse, and Peacock, which will act as its streaming distributor, have announced more details, including cast and character descriptions and a release date.

Jason Blum and Michael Aguilar, the latter of whom worked with Logan on “Penny Dreadful,” are producing “They/Them.” Logan and Bacon also serve as executive producers with Scott Turner Schofield, Howie Young, and Jon Romano. In a statement, Logan highlighted the personal nature of the film to him, saying:

​​​”They/Them has been germinating within me my whole life. I’ve loved horror movies as long as I can remember, I think because monsters represent ‘the other’ and as [a] gay kid I felt a powerful sense of kinship with those characters who were different, outlawed, or forbidden. I wanted to make a movie that celebrates queerness, with characters that I never saw when I was growing up. When people walk away from the movie, I hope they’re going to remember the incredible love that these kids have for each other and how that love needs to be protected and celebrated.” 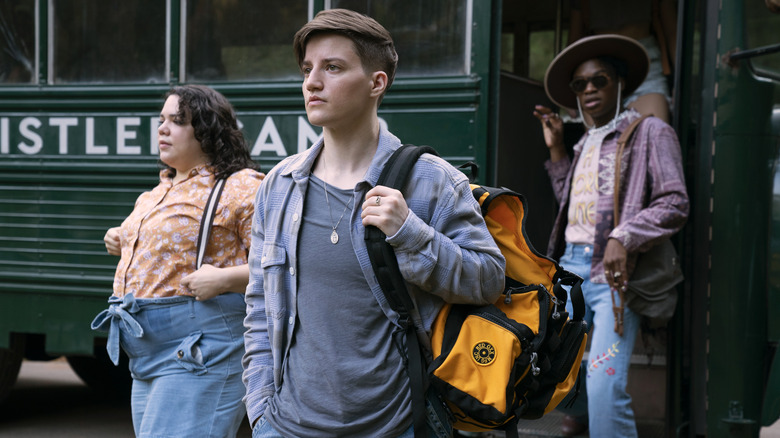 Conversion therapy is the controversial and scientifically unsound practice of trying to change a person’s sexual orientation or gender identity to conform to heteronormative standards. Maybe it’s just because today happens to be Friday the 13th and I’ve got Camp Crystal Lake on the brain, but marooning a bus full of LGBTQIA+ teens at a camp that specializes in conversion therapy is a scenario that seems especially ripe for a horror film.

When Logan talks about monsters representing “the other,” that is something he very much explored in “Penny Dreadful,” with literary characters such as Dorian Grey and Frankenstein’s creature. In “They/Them,” it sounds like the real monsters will be the conversion camp counselors, even as they “other” the teens they’re trying to deprogram.

The press release introduces us to the camper characters, some of which are seen in the photo above:

Theo Germaine (they/them) plays Jordan, a transgender and non-binary camper from a religious background who has made a deal with their parents to legally emancipate if attending Whistler doesn’t “work.” Quei Tann (she/her) plays Alexandra, a transgender woman whose parents have threatened to kick her out of the house if she didn’t attend the camp. Austin Crute (he/him) plays Toby, a gay camper who negotiated with his parents for a trip to New York in exchange for a week at Whistler Camp. Monique Kim (she/her) plays Veronica, a bisexual camper who wants to stop fighting who she really is.  Anna Lore (she/her) plays Kim, a closeted lesbian camper who puts on a perfectly crafted front for her family and friends, assuming that when she fits in, she’ll finally be loved. Cooper Koch (he/him) plays Stu, a jock with aspirations of a swim scholarship and joining his father’s fraternity — things he doesn’t feel he can achieve if he’s open about being gay. Darwin del Fabro (he/him) plays Gabriel, a sensitive gay camper tired of the persistent name-calling and bullying he’s endured his entire life.