The 1984 cult classic Buckaroo Banzai Across the 8th Dimension ended with a promise: “Buckaroo Banzai will return in Buckaroo Banzai Against the World Crime League.” But the first film was a box office flop, and despite its cult status, that sequel never materialized. Until now. (Sort of.)

Sadly, Buckaroo and the Hong Kong Cavaliers are not heading back to the big screen any time soon. But their adventures will finally be continued in a new novel written by original screenwriter Earl Mac Rauch. Get the details below.

For those who may not be familiar, Buckaroo Banzai Across the 8th Dimension is one of the most delightfully bonkers movies to come out of the entire 1980s, a decade that produced some pretty damn bonkers movies. But this one really earns its reputation: it’s a B-movie mashup about a physicist/neurosurgeon/samurai/test pilot/rock star and his rock band, the Hong Kong Cavaliers, who have to take down a group of aliens from the Planet 10. And if you think that’s wild, that’s barely scratching the surface. Here’s the trailer:

I know it was very strongly implied, but I guess the first movie’s ending never technically promised that Buckaroo Banzai Against the World Crime League would be a film. Now that promise of a sequel is being fulfilled decades later with the publication of a new book called – you guessed it – Buckaroo Banzai Against the World Crime League, et al: A Compendium of Evil. And this is actually the completion of a second promise, too: when screenwriter Earl Mac Rauch wrote a foreword for a reprint of the novelization of the first movie, which came out in 2002, Rauch teased that the adventures of Buckaroo Banzai would be continued in a series of novels. Nearly twenty years later, that’s finally happening. Here’s the cover: 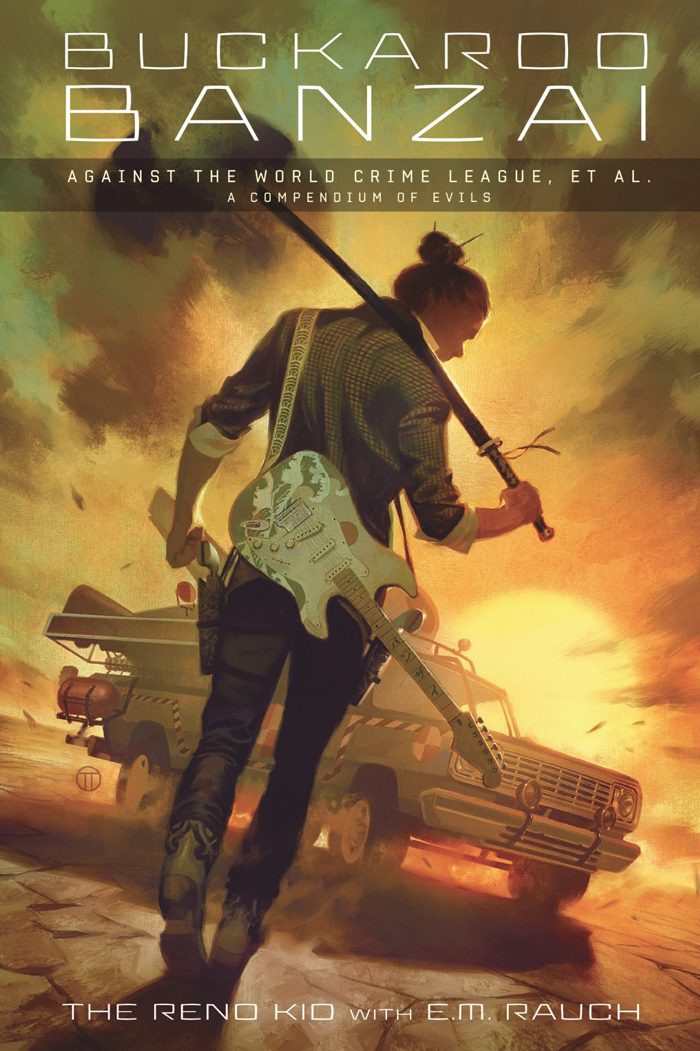 The book is being written by Rauch, but “told” to him by Reno Kid, one of the fictional members of the Hong Kong Cavaliers. Nerdist has the plot description:

Still mourning the losses of his beloved Penny Priddy and his surrogate father Professor Hikita, Buckaroo Banzai must also contend with the constant threat of attack from his immortal nemesis Hanoi Xan, ruthless leader of the World Crime League. To make matters worse, Planet 10 warrior queen John Emdall has sent her Lectroid legions against Earth with a brutal ultimatum. Or is her true target Buckaroo Banzai? As the apocalyptic threats continue to mount, only Buckaroo and his Hong Kong Cavaliers stand in the way of global destruction—or in the words of one of the movie’s iconic lines: “Laugh-a while you can, monkey boy!”

The book is currently available for pre-order, and it hits shelves on August 10, 2021.

The post ‘Buckaroo Banzai’ is Finally Getting That Long-Promised Sequel (But as a Novel, Not a Movie) appeared first on /Film.

/Film – ‘Slash Film: ‘Buckaroo Banzai’ is Finally Getting That Long-Promised Sequel (But as a Novel, Not a Movie)’
Author: Ben Pearson
Go to Source
January 13, 2021