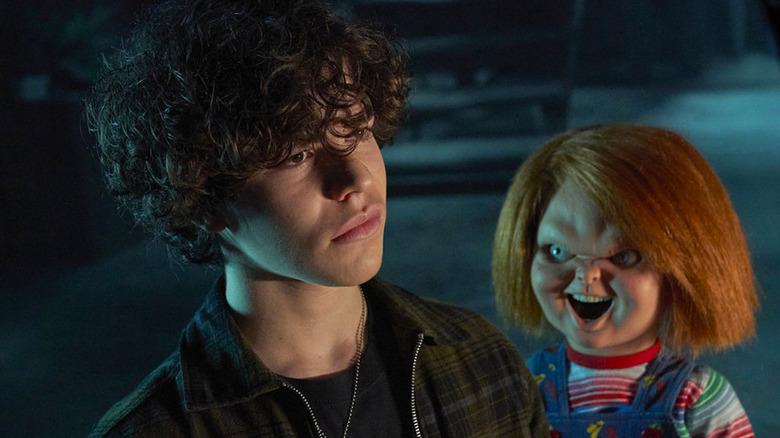 Horror franchises come and go, but Chucky is forever. The tiny ginger killing machine has survived over the years because his franchise is so fluid. Rather than stick rigidly to familiar beats, series creator and driving force Don Mancini has kept the “Child’s Play” franchise fresh by changing it as it went along. Changing things up so drastically from film to film could’ve backfired, but Mancini and company managed to make it all feel perfectly natural. So much so that we could easily believe that a franchise that started with a serial killer using voodoo to jump into a doll would eventually turn into a slapstick comedy. Chucky has gone from real menace to comic figure back to menace again. He’s whatever we need him to be.

Now, after a reboot that’s come and gone and mostly been forgotten about already, Chucky jumps to the small screen with the SYFY series “Chucky.” Mancini is running the show (and directing several episodes), and he’s brought along a bunch of folks who have remained steadfast with the series. Brad Dourif is once again back to voice Chucky, and the series also includes “Child’s Play” franchise cast members Jennifer Tilly, Fiona Dourif, Alex Vincent, and Christine Elise (although none of them save Dourif actually show up in the four episodes made available to the press). The TV series remains firmly within the continuity of the movies, which is no small feat since that continuity is always changing. After the one-two comedic punch of “Bride of Chucky” and “Seed of Chucky,” Mancini attempted to make Chucky scary again with the smaller-scale “Curse of Chucky,” which was followed by the rather messy “Cult of Chucky.” As a result of all this, the Chucky we meet here is a kind of amalgamation of all we’ve seen before. He’s still cracking jokes, but he’s also as bloodthirsty as ever. 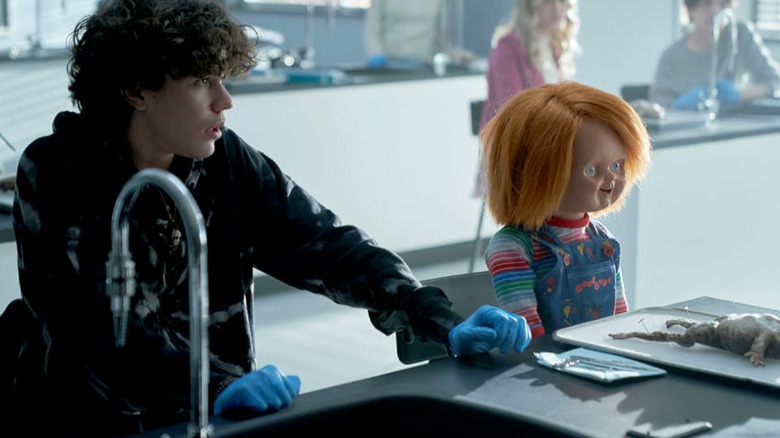 But Chucky also feels like a supporting player here. That’s not exactly out of character – he remained elusive in the first movie. But he also feels a bit directionless here. It’s hard to get a read on the character in the show because the first four episodes are designed to set things up. As a result, there are long stretches where Chucky is literally sitting around, waiting until he’s needed to start slicing and dicing. Along the way, “Chucky” also tries to fill in the backstory of Chucky’s human form, serial killer Charles Lee Ray, going all the way back to his childhood. More background into Ray’s character was presented in “Curse of Chucky,” but to continually fill in that backstory often feels like a mistake, and homages to “Halloween” that present the young Charles Lee Ray as a force of evil even in childhood don’t add much. If anything, giving Chucky more of a history robs him of some of his power.

Before Chucky starts doing his thing, the series introduces us to Jake Wheeler (Zackary Arthur), a gay teen who seems to be the biggest outcast in his school (the kids here are all supposed to be in middle school, but they all look and act a lot older, which is often a distraction). His home life isn’t much better, as his widowed father (Devon Sawa) is an abusive drunk who doesn’t accept his son’s sexuality. Wheeler spends his days constructing sculptures and other works of art (another thing his dad doesn’t accept) and pining over Devon (Björgvin Arnarson), a classmate who operates his own true-crime podcast. Jake is also relentlessly bullied, especially by ultra mean girl Lexy (Alyvia Alyn Lind).

Jake is a surprisingly complex lead, particularly in the way the show approaches his moral grayness. Jake is so tormented by others that he has no qualms about wishing some of his classmates (and family members) dead. Whether or not Jake is a budding sociopath or a mixed-up kid is one of the themes “Chucky” plays around with, and one gets the sense that Mancini is partially sending up the “Child’s Play” remake, which focused on a young character who was constantly being blamed for the bad deeds committed by that film’s version of Chucky. It’s risky to make such a troubled character your lead, and Mancini deserves credit for taking that risk and running with it, turning Jake into someone we’re not quite sure we can trust.

As Jake grows more and more disgruntled, Chucky goads him on. He even tries to sympathize with the teenager. “You know I have a queer kid…gender fluid,” Chucky says, referring to his child Glen from “Seed of Chucky.” “And you’re cool with it?” Jake asks. “I’m not a monster,” Chucky replies. 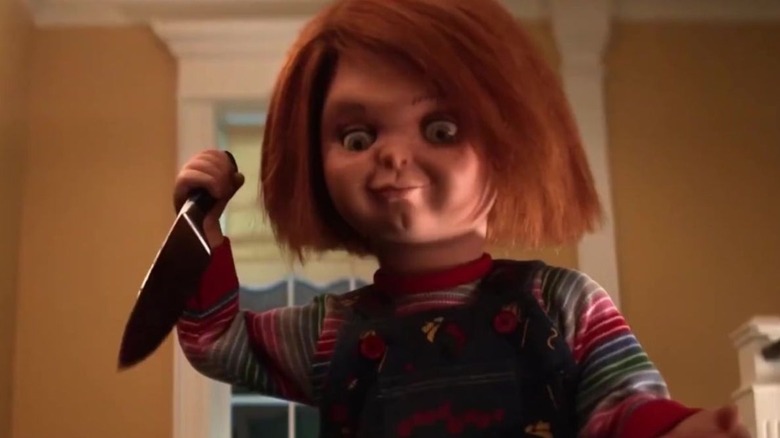 Chucky, who mysteriously arrives on the scene in Jake’s hometown of Hackensack, New Jersey and is acquired by Jake at a yard sale, sees the turmoil raging inside Jake and realizes he can exploit it. It’s not entirely clear what Chucky’s endgame is here. Why is he suddenly in town? Why is he spending so much time hanging around with Jake? Just what is Chucky up to here? It’s a mystery, and “Chucky” doesn’t want to show you all its cards right away. That’s fine, in theory, but the elusive nature of what’s going on starts to drag “Chucky” down a bit, and the episodes start to grow repetitive – Jake is tormented, Chucky says he’ll kill Jake’s tormenters, Chucky gets interrupted before he can really kill anyone. Mancini does throw in a wonderfully gruesome death-by-dishwasher scene, but he mostly has Chucky constantly foiled in his murderous attempts.

To make up for this Chucky waiting period, the first episode, directed by Mancini, turns up the style. There are multiple split diopter shots here that will make any Brian De Palma fan nod knowingly, and the series is often vibrant and colorful in ways so many modern TV shows aren’t. Adding to this is the show’s insistence on keeping things practical; Chucky is a puppet here, not a CGI creation, and that continues to lend the character a real personality. And Dourif continues to be the lifeblood coursing through the killer doll’s veins. His voice work as Chucky remains as enjoyable as ever, and while Mark Hamill did an admittedly good job making his own version of Chucky for the mostly forgettable remake, it feels good to have the O.G. back.

Tapping into that Chucky nostalgia is a big part of “Chucky.” The TV series feels both different enough to seem like a fresh start while remaining referential to what came before. Still, I can’t shake the feeling that there just isn’t enough here for a full season of TV. I’m hoping future episodes will prove me wrong, but there are multiple occasions where it feels as if Mancini had an idea for a new Chucky movie and stretched it into a TV show instead.

But I’m not too worried. Chucky is forever, after all. And if the “Chucky” series is a disappointment, in the end, I’m sure Chucky himself will bounce right back, good as new, ready for his next slaughter-filled adventure. Chucky always comes back.

Read this next: Counting Down The 10 Scariest And Most Evil Children In Horror Movies

‘Slash Film: Texas Chainsaw Massacre Vs Hellraiser – The Greatest Horror Franchise Ever [Round 6]’