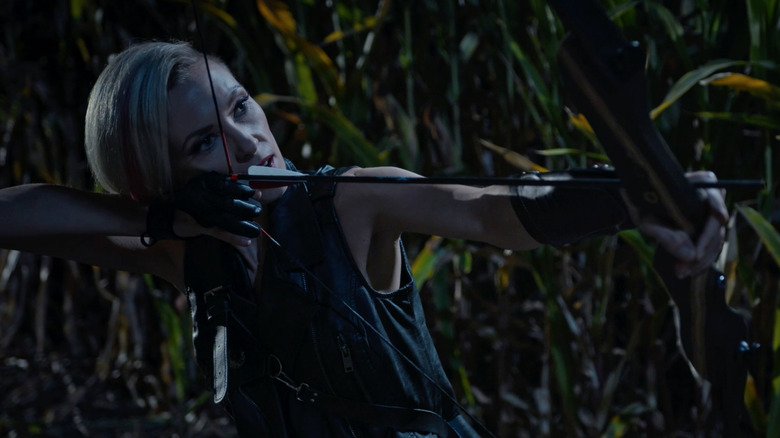 (Welcome to SlashClips, a series where we bring you exclusive clips from hot new Digital, Blu-ray and theatrical releases you won’t see anywhere else!)

“‘Fear PHarm 2’ picks up where Fear PHarm left off. After fighting for her life within a corn field maze and trying to outrun a number of murderous psychos, Melanie (Tiana Tuttle, ‘Fear PHarm’) has regained consciousness to discover that she is now being held hostage by the Walker family, so they can continue to harvest her skin for their breakthrough skin care cream.”

Discovery+ has provided us with an exclusive clip from the documentary “Crutch” which is available starting today exclusive on the streamer. The film follows award-winning dancer and cutting-edge performance artist Bill Shannon, who was born with a degenerative hip condition but found a way to express himself through dancing and skateboarding on crutches. Our clip showcases one of his brilliant performances as he dances and skateboards through a city street.

“‘Crutch’ provides an intimate look into award-winning dancer and cutting-edge performance artist Bill Shannon. Born with a degenerative hip condition, Shannon developed a way to express himself through dancing and skateboarding on crutches. Two decades of exclusive access, plus a lifetime of archival footage, depict Shannon’s extraordinary journey through medical odyssey, his struggles with chronic pain, as well as the evolution of his crutch dancing and skating. As Shannon rises to become a world-renowned performance artist he transforms from an angry skate punk to an international hero. ‘Crutch’ also dives into Bill’s provocative street performances, in which he exposes the hidden world of assumptions disabled people encounter in public, on a daily basis. While the film questions his early exploitation of strangers’ good Samaritan impulses, it also marvels at Bill’s ability to create solutions and empower others to navigate similar challenges. From childhood “cripple” to international provocateur, ‘Crutch’ is an emotional story of a one-of-a-kind artist’s struggle to be understood.”

The streamer Topic, which offers content from around the globe, has provided us with an exclusive clip from the second season of Belgian supernatural crime drama series “Beau Sejour” (also known in some territories as “Hotel Beau Séjour”). The extended two-minute clip comes from the opening of the new season and features former marine commander Maurice Teirlinck (Gene Bervoets, star of George Sluizer’s cult 1988 horror classic “The Vanishing”) having a very rude awakening as the coast guard comes to his rescue … or do they?

“Seven years after abandoning his family, Maurice wakes up on his boat ‘Beau Séjour’ to find his own body hanging from the mast. Caught between life and death, he sets out to find the truth while confronting the pain he’s caused in his wake.”

‘Slash Film: The Daily Stream: When It Comes To Horror-Comedies, Spree Is A Blissfully Satirical Romp That Does It Right’

Doug Bradley and Robert Englund Will Be Chatting Live on Twitch’s Horror Hub Marketplace Next Week!