Creed III will see Michael B. Jordan take a much bigger role in the Rocky spin-off series by letting the actor hop in the director’s chair for the first time. Even though Jordan will be following in the footsteps of Rocky star Sylvester Stallone by getting behind the camera while also staying in the ring, it appears he’ll be doing so without Stallone by his side.

Sylvester Stallone confirmed that he won’t be returning for Creed III in a comment on Instagram (via JoBlo): 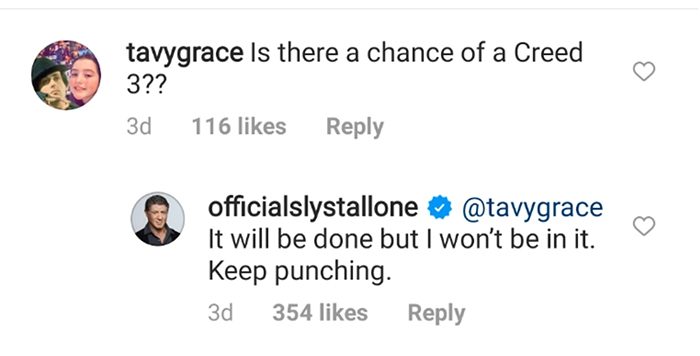 Though the Creed franchise has focused on the rise of Adonis Johnson, the son of Apollo Creed, there has still been a prominent part for Rocky Balboa as his mentor. Across the first two movies, Rocky has dealt with a cancer diagnosis and the increasing feeling of being alone without those who were by his side throughout his boxing career. So Rocky’s exit from the franchise feels like the most logical next step.

This shouldn’t come as too big of a surprise since Sylvester Stallone himself announced in 2018 that Creed II would probably be his last outing as Rocky Balboa. At the time, he said:

“This is probably my last rodeo because what I thought happened, it has happened, I never expected. I thought Rocky was over in 2006, and I was very happy with that. Then all of a sudden this young man presented himself, and the whole story changed. It went on to a new generation, new problems, new adventures. And I couldn’t be happier because as I step back, as my story has been told, there’s a whole new world that’s gonna be opening up for the audience, for this generation. Thank you very much, Stephen. And definitely you, Michael, for making that possible. Now you have to carry the mantle.”

But in the summer of 2019, Stallone mentioned an idea he had for yet another Rocky sequel, and maybe even a prequel. The latter idea is something that Stallone is currently turning into a potential series for an unnamed streaming outlet. I’m not sure how much story needs to be told about the earlier years of Rocky Balboa since the original movie does a fine job of setting that up for us, but that’s just Hollywood for you.

So how will Creed III address the absence of Rocky? The most obvious solution would be to start the movie with Rocky’s funeral. It puts Adonis in a tough spot, gives him something to immediately try to overcome, and forces him to evolve without relying on Rocky to pick him up when he’s down. How does Adonis get by without Rocky in his corner? A hero overcoming obstacles in the absence of their greatest mentor is a classic formula that has worked time and time again. But we’ll have to wait and see which path the movie takes.