When HBO Max launched earlier this year and touted the huge catalog of movies, TV shows, and animated series based on DC Comics, it felt like it was only a matter of time before the DC Universe streaming came to an end. The writing on the wall came when Doom Patrol and Harley Quinn became available on HBO Max, and now it’s official: DC Universe will be no more in 2021, and it will be rebranded as DC Universe Infinite, solely a comic book subscription service.

The good news is that all the original DC Comics shows that previously called DC Universe their home will continue to live on at HBO Max. And if you’re a current DC Universe subscriber, you can easily upgrade to HBO Max for a limited time promotional price. Get all the details below.

DC Universe sent out an official press release announcing that it will be turning into DC Universe Infinite starting on January 21, 2021. The subscription service will offer over 24,000 comic books, spanning over 80 years of the DC Multiverse. There will also be original comics created just for DC Universe Infinite, as well as special access to DC fan events in the future, and special offers at the DC Shop online. 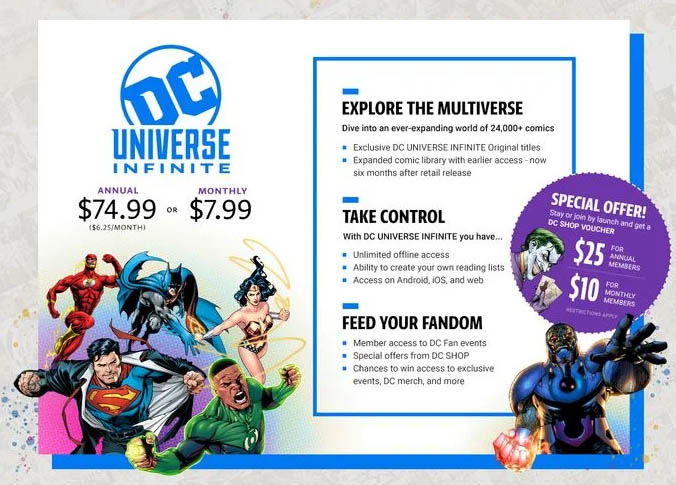 “Our fans love the platform’s robust library of comic books and, with the transformation, we will not disappoint. I’m excited to share that not only will DC UNIVERSE INFINITE members still be able to read all of the great comics that they’ve enjoyed but new issues are debuting on the platform quicker than before, digital first exclusives are being created, and the members-only events will begin as soon as possible. There has never been a better time to be a DC fan!”

Though DC Comics fans surely enjoyed the comic book side of their DC Universe subscription, the big draw was the exclusive original programming that it launched with. Now that shows like Doom Patrol, Titans, Harley Quinn, Stargirl, and Young Justice are heading to HBO Max, their subscriber base is probably going to drop significantly. But don’t worry, because you can easily upgrade to HBO Max with a limited time promotional price.

If you’re a DC Universe subscriber right now, you can upgrade your subscription to include HBO Max for an additional $4.99 per month. Combined with the $7.99 cost of DC Universe, that means you’ll be getting everything HBO Max has to offer, plus access to the massive DC Comics library, for about $13. That’s $2 less than the regular price for HBO Max alone, so that’s a pretty good deal. But the offer is only available through October 30, so if you want to take advantage of it, now is the time.

On top of that, starting on February 1, 2021, every DC Universe Infinite subscriber, whether they’re existing members or new sign-ups who pre-order their subscription, will get a voucher that can be used at the DC Shop online. Annual subscribers get $25 and monthly subscribers get $10.

Simply put, you believer that things or people make you unhappy, but this is not accurate. You make yourself unhappy.