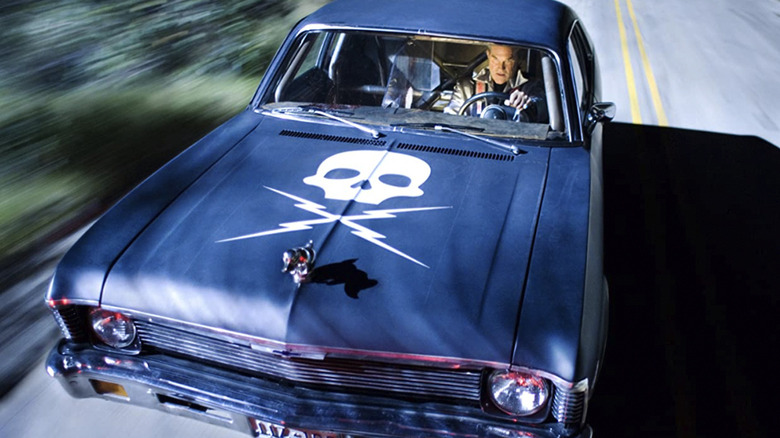 In the eyes of film bros in the mid-2000s, no two filmmakers were cooler than Quentin Tarantino and Robert Rodriguez. Posters for their films lined the walls of dorm rooms everywhere. They were the renegade badasses of independent film in the 1990s, and the 2000s saw them making their grand action epics. Tarantino returned from a six-year hiatus after “Jackie Brown” with his martial arts spaghetti western revenge two-parter “Kill Bill,” and Rodriguez took comic book stylization to a new level with an adaptation of Frank Miller’s “Sin City” comic books. Material that had long been relegated to B-movies had been resurrected in these acclaimed A-pictures. What was once thought of as schlock was now pure art.

Tarantino and Rodriguez also ran in the same circles and frequently worked together. Both had directed segments in the anthology film “Four Rooms.” Rodriguez had directed Tarantino as an actor in “From Dusk Till Dawn” from a script Tarantino wrote. Tarantino directed a scene in “Sin City.” Rodriguez wrote music for “Kill Bill: Volume 2.” These two were attached at the hip, and in 2007, they put all their chips on the table to see just how viable their names were and if the thirst for exploitation cinema was as palpable as they imagined. What if they could recreate the feeling of going off to rundown drive-in movie theater for a double bill of some lean, mean trash? They wanted the whole experience: Scratched prints, missing reels, trailers for other cheap exploitation films, and extreme violence.

Well, on April 6, 2007, “Grindhouse” was released, and instead of crowds packing theaters to see the latest from two of the most well-known working filmmakers of the era, cinemas were filled with empty seats. The movie bombed. Hard. “Grindhouse” did get a favorable critical reception, but nobody was going to see it. Quite frankly, the whole “Grindhouse” idea forgot to take into account the audiences don’t sit through double features anymore. Even in 2007, people had a hard time leaving the house for one movie, let alone two. The trailer even boasted about its two-and-a-half-hour running time, which is not the selling point they thought it was.

Eventually, the two features that made up “Grindhouse,” Rodriguez’s “Planet Terror” and Tarantino’s “Death Proof,” were released separately in their full, uncut forms (they had been trimmed to play in that combined theatrical experience). Once that separation happened, more people started to find these movies on video, and “Death Proof,” in particular, began earning more and more appreciation — to the point where some would consider it a modern cult classic.

Minor Tarantino Is Still Better Than Most 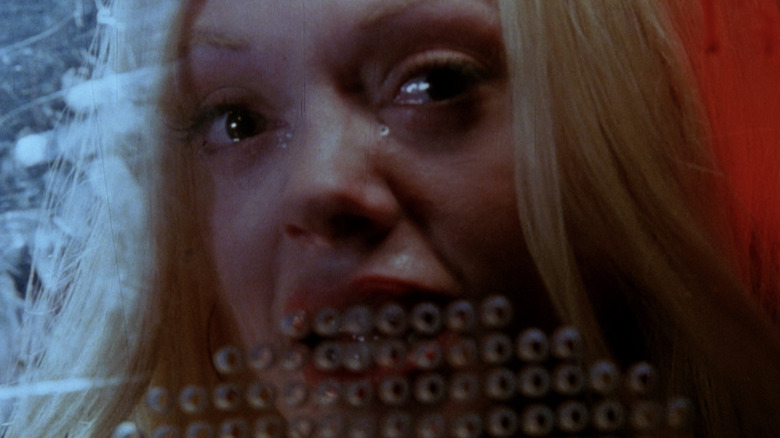 Even if a film by Quentin Tarantino happens to fall by the wayside on first glance, nothing that guy makes disappears from the ether. “Jackie Brown” was originally seen as a step down from “Pulp Fiction,” and now, many consider it to be his finest film. “The Hateful Eight” didn’t do so hot at the box office, but it played a big role in how people discuss film formats. Once Tarantino’s “Death Proof” was released on its own, more and more people gravitated towards his car-based horror flick and realized there was far more artistry there than the initial package presented. From the stunt work to Tarantino’s knack for tension building to finding a new acting collaborator in Kurt Russell, “Death Proof” shows why minor Tarantino is still better than most other directors’ best films.

“Death Proof” is split up into two segments, both centering on the character of Stuntman Mike (Kurt Russell) and how he terrorizes a group of young women with his so-called “death proof” stunt car. The first segment sees him in an Austin bar, watching a local DJ (Sydney Poitier) and her two friends (Vanessa Ferlito and Jordan Ladd), along with another single woman in the bar (Rose McGowan). In the second, he takes notice of a group of four women (Rosario Dawson, Mary Elizabeth Winstead, Tracie Thoms, and Zoë Bell) in town working on a movie who stop at a convenience store. In both, he aims to destroy these women with his car. In one, he succeeds in brutal fashion. In the other, he very much does not. While all that sounds very action-packed, “Death Proof” sings because it is mostly what Tarantino is best at: A very talkative hangout movie.

Especially in the first half, a lot of time is spent on these friend groups just sitting around talking about music, movies, and whatever comes into their minds. We know Stuntman Mike is lurking around, ready to do some terrible stuff, so if we just sit with these friends who have nice conversations with each other, the worse we are going to feel when they meet a grisly end. Conversely, if they get the upper hand on Mike, we will be even more elated. Tarantino gives us time to learn about and like these women. In so many other horror films, they would simply be there as gore fodder, but not here. In “Death Proof,” they are people — maybe not the most fleshed-out people Tarantino has ever given audiences, but people nonetheless.

The Magic Of Zoë Bell 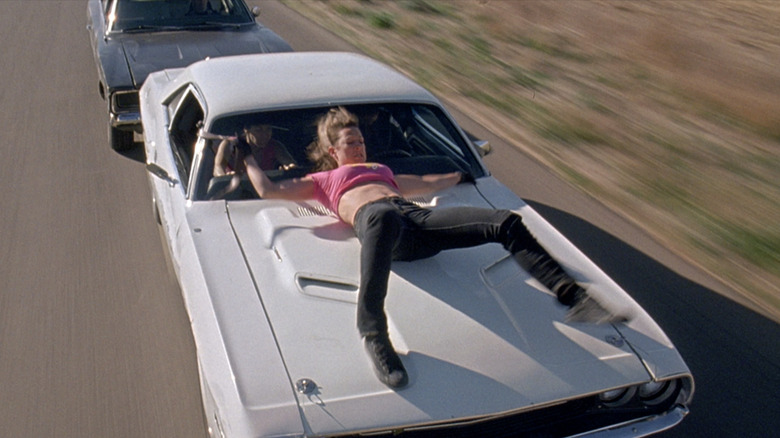 The talking is all well and good, but the reason to make “Death Proof” is to create a vehicle (no pun intended) for New Zealand stuntwoman Zoë Bell. Tarantino and Bell first teamed up on the “Kill Bill” films, in which Bell acted as Uma Thurman‘s primary stunt double. Seeing how physically adept she was, along with how much personality she brought to the screen, Tarantino hired her in “Death Proof” to play a version of herself. Bell is bubbly, fearless, and full of life. She is the least well-known in her little friend group, but you cannot take your eyes off of her. Then … they get in a car.

The centerpiece action sequence of “Death Proof” is an extended car chase between Stuntman Mike and the movie crew friends, and for a majority of that scene, Zoë Bell is strapped to the hood of their speeding car. Being a stuntwoman, there is no need to cut around an actor faking that they are on the hood of the car. You can see Bell’s face plain as day, and because no cheating or faking is happening, you can feel everyone in the audience’s pulses racing right along with those vehicles. Few car chases have felt as dangerous as the one in “Death Proof.” Seeing this amazing woman hold on for dear life as her body flies up and down and side to side is both frightening and exhilarating, and that could only have happened if this character was being played by Zoë Bell.

Once you’ve seen the utter terror of that stunt work, it feels so good when the women turn the tables on Stuntman Mike and ultimately bash in his head. Nobody deserved to meet that end more than him. The film leaves you on a rush of adrenaline so high that you may want to pay extra attention to how fast you are driving the next time you get in a car. “Death Proof” may not be quite as well crafted as “Inglourious Basterds” or as emotional as “Jackie Brown,” but while you are in it, it’s one hell of a ride. 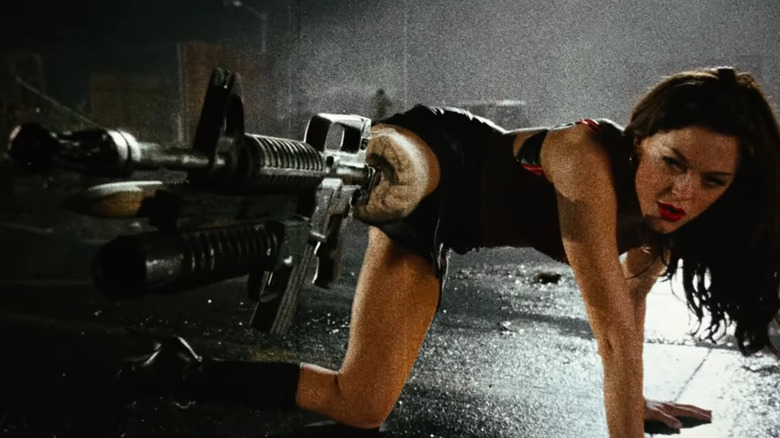 While Quentin Tarantino took the “Grindhouse” opportunity to make a film with a tremendous amount of craft and thought, Robert Rodriguez went in the entire other direction for “Planet Terror.” He looked to pack as much fun from those old exploitation films as he could into one bloated, winking film. All he aimed to do was to have silly fun, but even on that level, it’s not all that successful. There’s nothing to hang your hat on in “Planet Terror.” The infection makeup is gross, and the effect to give Rose McGowan a machine gun leg is convincing. But it’s not in service of anything other than style.

Tarantino looked to make an exploitation film as they were, and Rodriguez looked to make one as he remembered them. These films are not manic bursts of violence and absurdity from start to finish. If you do that, you simply wear out your audience. “Planet Terror” needs to build to something. It needs tension. “Death Proof” has everything missing from “Planet Terror.” As it turned out, “Grindhouse” shows a perfect point of comparison between the two directors. Both could not have been hotter at the time, and ever since its release, Tarantino has only grown in stature while Rodriguez has petered out. Look no further than “Death Proof” to see why.

The post Death Proof Is The Tarantino Classic We Don’t Talk About Enough appeared first on /Film.

“American Horror Stories” Returns to FX on Hulu This Summer

‘Erzulie’ Trailer Brings a Swamp Mermaid Up from the Depths [Exclusive]