Disneyland could be getting a lot bigger. The theme park has announced their new DisneylandForward initiative, which will see the House of Mouse working with the city of Anaheim to reimagine what the resort district of Disneyland could look like by building what they refer to as a “Immersive Theme Park” expansion.

The hope is for Disneyland to create a more integrated experience between the Disneyland and Disney California Adventure parks that would also beef up each park substantially by bringing together theme park experiences, hotels, retail spaces, dining locations, and entertainment. This would also include potential new attractions inspired by Black Panther, Frozen, Avatar, TRON, Toy Story, and more. 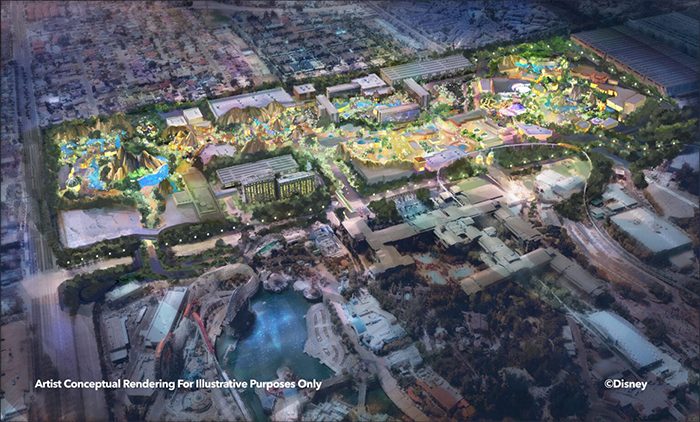 Above is a piece of concept art showing where the hopeful Immersive Theme Park would be located in relation to the already existing parks. However, this isn’t a done deal yet. It’s merely a plan that Disneyland hopes they’ll be able to execute with the help of Anaheim.

In order for this new Disneyland expansion to happen, they have to work with city officials to reconfigure some agreements and zoning allowances that were dictated back in the 1990s. Here’s how the DisneylandForward website describes the situation:

“In the 1990s, the City of Anaheim approved specific plans that would guide the growth of the Disneyland Resort and businesses in the newly formed Anaheim Resort area. And while those plans resulted in major improvements to the entire Anaheim Resort, their “traditional” district/zone approach does not allow for the diverse, integrated experiences theme park visitors now seek, severely limiting Disney’s ability to continue investing in Anaheim.”

As it stands, new hotels need to be located in what has been labeled the Hotel District and traditional theme park sights and attractions are meant for the Theme Park District. But Disney has areas for which they hold development rights that they want to use to develop “integrated offerings,” allowing theme park experiences and hotels to overlap and coexist. That’s currently now allowed under the previously established district and zoning agreements

Disneyland made it clear that this is not a project that they’re looking to have funded by taxpayer dollars (the last time they tried this, it included tax breaks). They’re not trying to pick up more land or property either. This is merely a reconfiguring of what they’re allowed to do with the land they’re already approved and allowed to use. But what would this expansion entail? 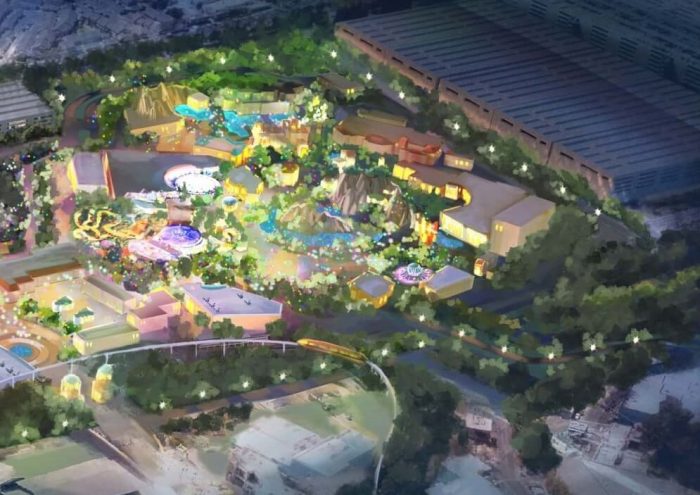 First up, the future of the Disneyland expansion was compared to the Tokyo DisneySea theme park. This would include new lands focused on Frozen, Tangled, and Peter Pan‘s Neverland. DisneylandForward provided a breakdown of the potential attractions that could be coming to Disneyland in this area: 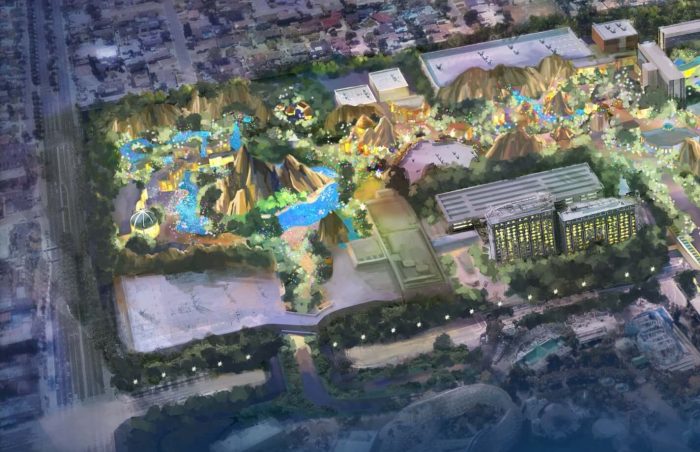 Over at Disney California Adventure, the expansion would include more “technologically advanced” attractions, with Shanghai Disneyland and Disney’s Hollywood Studios in Florida serving as inspiration for some of the potential new attractions from TRON, Zootopia and Toy Story: 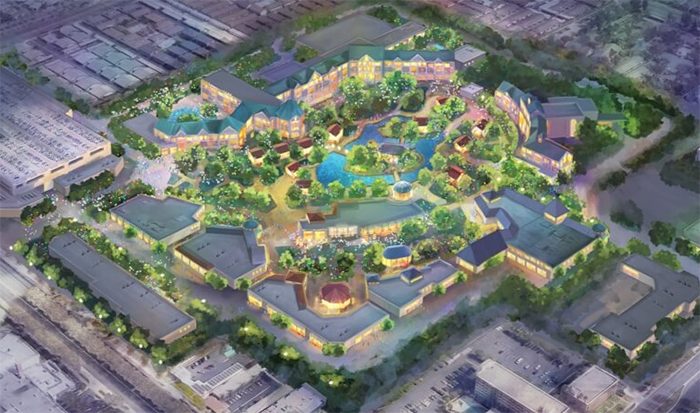 As part of the integrated theme park experience that would come with the Immersive Theme Park expansion, Disneyland also hopes to introduce “a new kind of Disney entertainment destination” that would be modeled after Disney Springs at Walt Disney World in Florida. The new area could take over the current Toy Story parking lot, and there would be theme park experiences, hotels, retail spaces, dining locations, and entertainment all in one area, which is again the big reason Disneyland needs the help of Anaheim city officials to approve the plan.

Here’s a map Disneyland provided to show how this would all be laid out if their plans came to fruition: 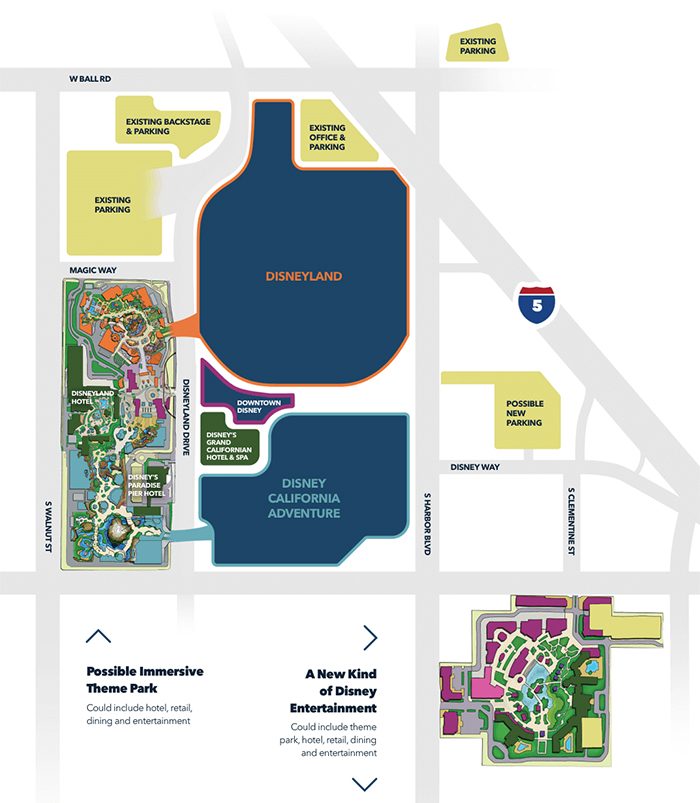 As you can see, the Immersive Theme Park is imagined to be built upon the Downtown Disney and Lilo and Stitch parking lots, woven in-between the Disneyland Hotel and Paradise Pier Hotel.

Interestingly enough, details in the above map of the Immersive Theme Park expansion also provide some hints of other potential attractions that were not specifically mentioned in Disney’s breakdown. Some eagle-eyed theme park fans noticed a few interesting details that can be spotted when you zoom in on the image.

Other lands on the DCA side in the concept art (just my best guess):

The inclusion of the massive Black Panther statue from Wakanda is undeniable, and Disneyland dedicating an entire land to the fictional African nation would be huge. The Avatar expansion also seems pretty likely since Disney World in Florida already has that land. With the forthcoming arrival of several Avatar sequels, bringing the world of Pandora to both theme parks is likely a major priority for Disney.

However, I’m not entirely convinced a Raya and the Last Dragon land would be a big hit. Though the movie has been fairly well-received by critics and audiences, Disney doesn’t seem to be hyping it up as much or paying it anywhere near the same attention typically provided to their animated movies. But perhaps Disney thinks they can build an immersive world out of the film with some cool rides, perhaps letting fans ride on their own Tuk Tuk or fly alongside the dragon Sisu. It would also help expand their theme park roster with a land that encourages diversity and fantastical fun.

While this all sounds rather exciting, it should be noted that this is merely Disneyland’s proposal for what they would like to do with the land they already have. They need approval from Anaheim for any of this to happen, and the potential attractions outlined are merely ideas for what could be done with the space. Specific lands, attractions, and more are bound to change during the development process, and this kind of expansion is something that could take many years to achieve. But for now, the mere possibility is an exciting one.