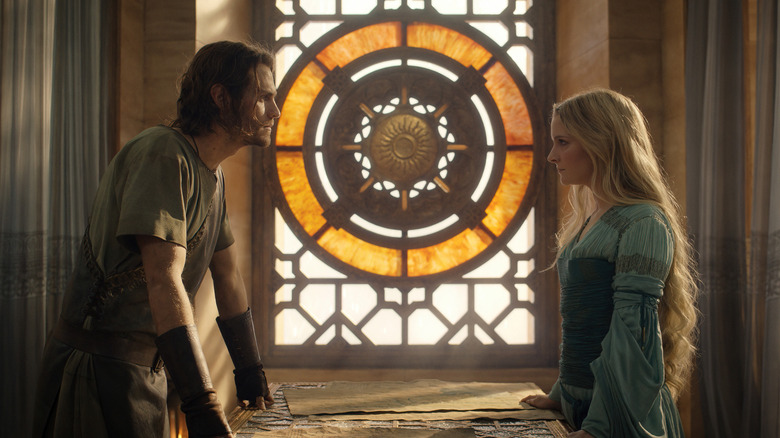 Five episodes into “The Lord of the Rings: The Rings of Power,” we’re now officially more than halfway through the deliberately-paced season and many viewers still find themselves struggling with the idea of what an adaptation of J.R.R. Tolkien should “feel” like. Nobody can ever really define what such a subjective statement actually means, of course, especially since material as well-known as this comes with such a broad range of appeal among so many different demographics. But I’m going to go out on a limb and guess that the opening of episode 5, titled “Partings,” immediately sets the tone for a far more coherent hour than last week’s scattershot episode and lives up to much of what fans would consider quintessential Tolkien.

After a quiet but foreboding conversation between Nori (Markella Kavenagh) and the Stranger (Daniel Weyman), where the almost childlike amnesiac expresses doubt over whether he’s actually good or not (RIP those poor fireflies!), our main family of straggling Harfoots embark on their long and punishing migration to catch up with the rest of the clan. But the stirring travelogue, accompanied by Poppy’s (Megan Richards) wonderful walking song, perhaps best encompasses the unique magic that these characters bring to the series that helps recapture what worked so well in “The Lord of the Rings.”

Although the sequence ends on another ominous note with a match cut between the full moon, the Stranger’s fiery arrival on the meteor, and the ash-ridden landing spot that has now been discovered by some evil-looking figures (led by the unidentified character played by actor Bridie Sisson, who probably isn’t Sauron), the montage evokes some of the best moments from Peter Jackson’s trilogy and even Tolkien’s novels, as well. And, most importantly, the focus on the Stranger as he observes these kindhearted Harfoots working together for a common good establishes the episode’s running theme: Whether where we come from has to dictate where we choose to go.

In other words? Perhaps not all who wander are really lost. 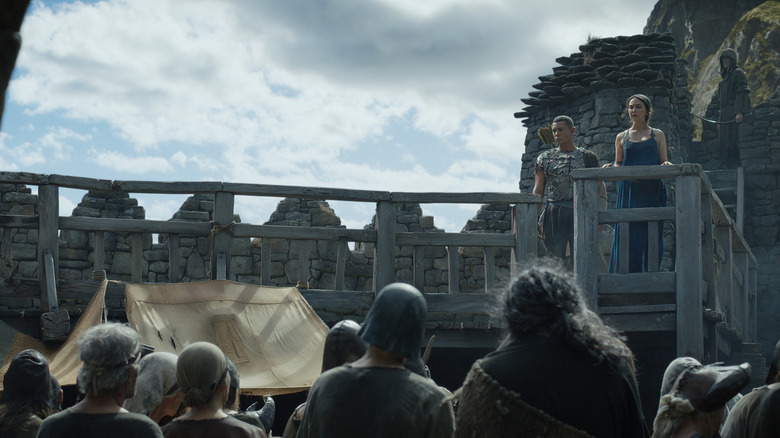 The rest of the hour purposefully jars viewers loose of the melancholy reverie that opens the episode, transitioning to the villainous Adar (played by “Game of Thrones” alum Joseph Mawle) as he readies “legions” of orcs to attack the Southlanders taking shelter in the abandoned elf watchtower. Here is where the first of the episode’s many partings occur, as the deluded Waldreg (Geoff Morrell) interrupts Bronwyn’s (Nazanin Boniadi) inspirational speech and promptly divides the group into two — one that’s keen on forsaking the Morgoth-sympathizing history of their ancestors and fight off Adar’s army, and the other seduced by Adar’s promise of safe passage if only they kneel and swear fealty to him. Not even Arondir’s (Ismael Cruz Córdova) pleas can stop fully half of the villagers from embracing their dark history and going over to the enemy.

Not even those enlightened inhabitants of Númenor are immune to the widening gulf swallowing up our main characters in Middle-earth, as the island kingdom endures divisiveness of its own between those who support Galadriel (Morfyyd Clark) and Queen Míriel’s (Cynthia Addai-Robinson) call to arms and the those less eager to wade into a war that they have no part in. This is mostly seen through the eyes of Eärien (Ema Horvath) and Kemen (Leon Wadham), two characters created for the show with familial ties to figures playing a direct role in the upcoming battle. Coaxed into confronting his influential father, Kemen instead gets an eye-opening lesson in politics as Pharazôn (Trystan Gravelle) reveals his hidden agenda for joining the fight — increased power for Númenor, potential trade profits, and the possibility of flipping their dynamic with the unwanted elves by making them take orders from Númenor, for a change.

Meanwhile, Galadriel and Halbrand (Charlie Vickers) provide a personal balance to the political strife when the elf pushes the exiled Southlander king too far. Content to live in peaceful seclusion, Halbrand instead feels like Galadriel shamelessly manipulates his claim to the throne to provoke Míriel into sending the formidable Númenorean fleet in the first place … and he’s not wrong, either. 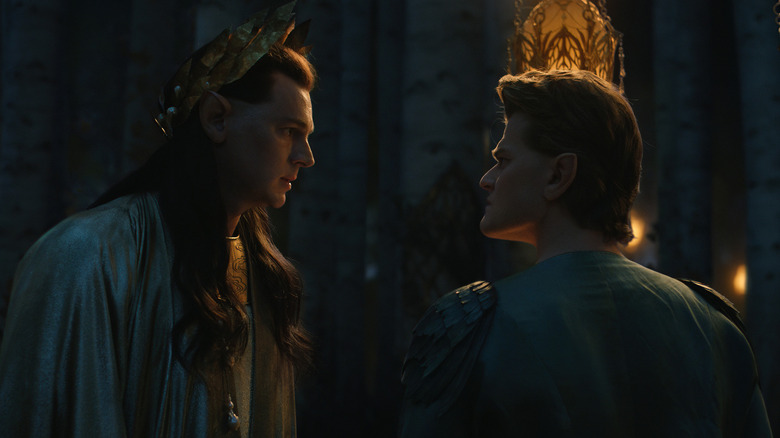 Elsewhere, things grow even direr for those back on the mainland. First, the mysterious power that the Stranger wields takes a turn for the sinister when he successfully fends off wild wolves attacking the Harfoots — but at the cost of strange, diseased-looking markings on his arm that soon results in more harmful side-effects for the innocents around him. With his magic seeming to grow in strange and unpredictable ways, the Stranger inadvertently gets Nori caught up in some sort of incantation that freezes water and her arm along with it. In case composer Bear McCreary’s apprehensive score didn’t give it away, the scene transition preceding this moment — where we abruptly cut from Míriel’s royal father warning her against “darkness” in Middle-earth to the Stranger himself — ought to raise viewers’ eyebrows even further about this character’s true intentions. Tom Bombadil truthers, it’s not looking so great anymore!

The spread of darkness in Middle-earth becomes much more literal in the storyline involving Elrond (Robert Aramayo), Prince Durin (Owain Arthur), and High King Gil-Galad (Benjamin Walker). While marking the successful “union” of their people with the building of the forge, however, even their celebratory toast is marred by mistrust on both sides of the elf/dwarf divide. Elrond begins to suspect that the High King had ulterior motives all along and, as Gil-Galad himself admits, it comes down to mithril. The twist involves the “blight” that we’ve seen growing on various plants and trees (first seen when the Stranger’s meteor streaked overhead at the end of the premiere, in fact) and the fading of the Eldar’s light posing an existential threat to elves everywhere. Only mithril, which contains the light of the Silmarils (and, by extension, the trees of Valinor themselves), can save them from having their immortal souls “dwindle” … somehow.

Admittedly, this danger still feels too vague and ill-defined to really mean anything to us just yet, but it’s enough to sink Elrond into a crisis of conscience over whether to abide by the oath he swore to Durin last week to keep his secret, or to admit his knowledge of the dwarves’ discovery of mithril (even though Gil-Galad pretty much figures it out already). 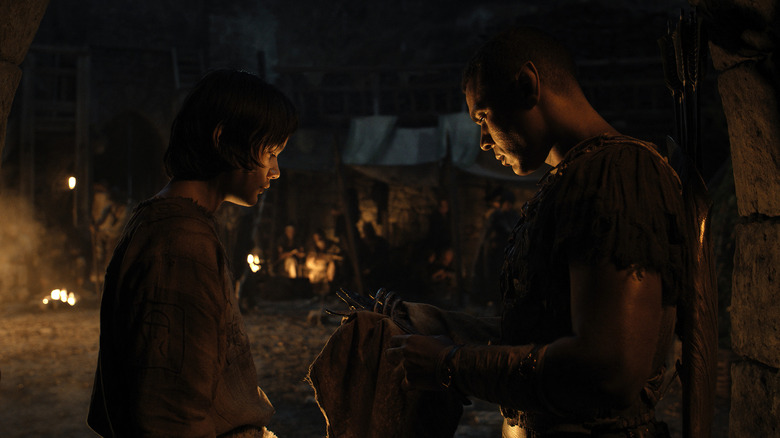 Every character, it seems, dangles on a knife’s edge in this episode and must confront fateful choices that will define the rest of the season to follow.

In the Southlands, young Theo (Tyroe Muhafidin) elects to stay with his mother over Waldreg and even goes so far as to open up to Arondir about his broken sword hilt. Both decisions pay off when Arondir immediately recognizes it as some kind of a “key” that (quite conveniently) lines up with an old stone statue at the watchtower. Whatever the specifics, it’s clear that Adar seeks to recover Theo’s hilt … at all costs.

Meanwhile, Isildur (Maxim Baldry) and Kemen find their actions intersecting in explosive ways on Númenor, when the former’s attempt to stowaway on one of the warships under the nose of his father Elendil (Lloyd Owen) coincides with the latter’s devious act of sabotage to blow up the fleet and prevent the island from entering war in Middle-earth at all. Bound by mutually assured destruction if either one reveals the other’s secret, the rest of the main characters must instead deal with the fallout of having only 3 ships left.

Ultimately, Halbrand alludes to dark secrets of his own when he stands as the deciding vote over whether to aid Middle-earth or not against Sauron. He heavily implies that he was forced to ally with the enemy in order to make it onto that raft in the Sundering Seas where he met Galadriel in the first place. But rather than judge him, Galadriel’s admission that she simply can’t stop fighting — to the point that even friends like Elrond could no longer differentiate herself from the evil she meant to defeat — draws even more parallels between the two characters. And though Halbrand wavers over whether to rise above his past or not, his sense of honor finally wins out.

Halbrand, Bronwyn, Durin, and more all hold the fate of kingdoms in their hands, and all factor into the episode’s impressively strong focus on overcoming great divides and past failures to do the right thing. With only a handful of episodes left, “The Rings of Power” has carefully positioned its characters to stand on the cusp of their biggest battle and most daunting challenge yet.

Riddles In The Dark And Other Stray Thoughts 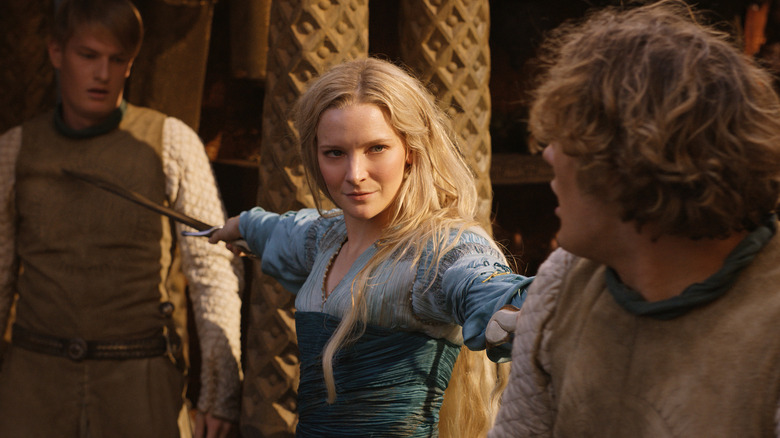 Read this next: The Best Lord Of The Rings Characters Who Weren’t In The Movies

The post Divided Loyalties And Painful ‘Partings’ Take Centerstage In The Lord Of The Rings: The Rings Of Power appeared first on /Film.