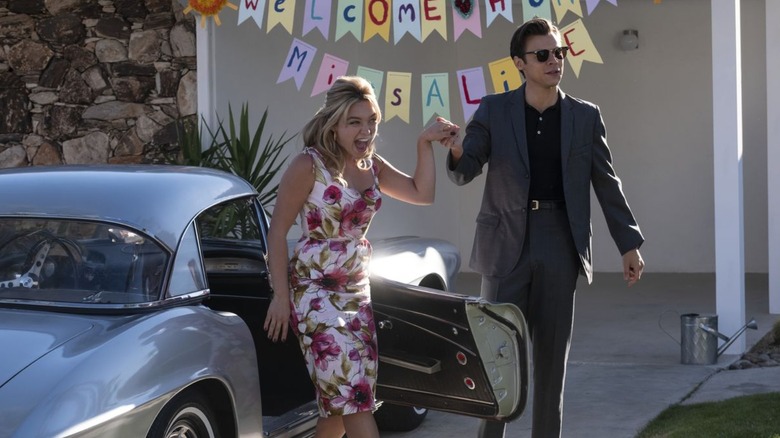 No matter what your feelings are about “Don’t Worry, Darling” — and everyone and their mother seems to have plenty — it’s obvious that Olivia Wilde’s sophomore feature at the very least has some fantastic visuals and production design. The thriller film’s retro setting in a 1950s town called Victory, California offers up plenty of opportunities for its cast to dress to the nines. Whether it’s stifled housewife Alice’s (Florence Pugh) gorgeous dresses and aprons or the suits her husband Jack (Harry Styles) dons to go to his mysterious job, everyone in this movie conveys a polished sense of style.

/Film’s Jack Giroux spoke with costume designer Arianne Phillips about the process of curating outfits for each character — even when, in the case of pop star Styles, the looks in question contradicted the actor’s own signature style. Phillips spoke about the “level of commitment” the cast had to the costuming process, saying that both Pugh and Chris Pine were “incredibly engaged with the conversations around the costumes.” Phillips says Styles, who has so far only appeared in “Dunkirk” and “Eternals,” was “more curious about the process, being new to acting.”

Phillips says that it felt strange to put someone as recognizable as Styles in the film’s retro yet rather traditional clothes, saying, “I think the thing about Harry Styles that’s so genius is that he does play with clothing in a way that is super bold and playful and at times non-binary, there’s a curiosity there.” The costume designer also notes that “it was almost odd to put Harry in these ’50s clothes because he has an incredible personal style.” 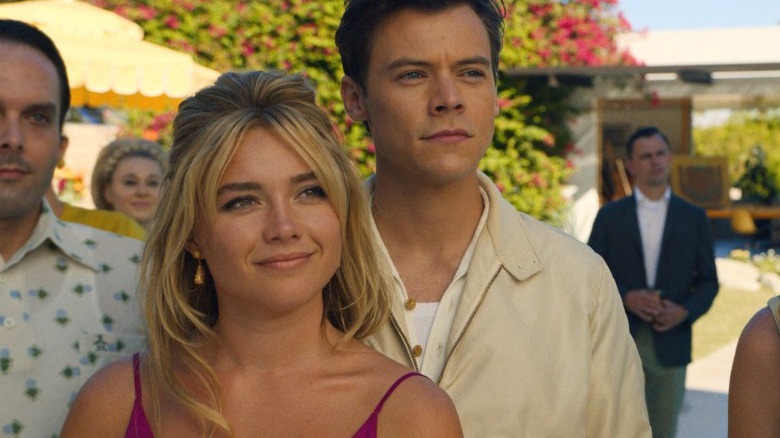 While Phillips doesn’t mention Styles’ reaction to the costume decisions beyond curiosity (sorry, no drama here), she says that his character’s aesthetic was not like his own, explaining that his costumes “really [embraced] that rat pack bro culture that I don’t think of him as.” In trailers, we glimpse a bit of that patriarchal culture as Jack, Pine’s character Frank, and others aggressively yell a call and response — “Whose world is this?” “Ours!” — while clad in white suits. Needless to say, this character doesn’t much resemble the real-life flamboyantly styled singer whose mantra is “treat people with kindness.”

Phillips notes that it’s not always easy to suspend disbelief when watching someone wildly famous on screen, saying, “I think celebrity can be tricky when watching films. I hope that people believe. I hope that costumes and the hair and the makeup help the audience, especially the young people that are going to come see it because he’s in it.” It’s true that, historically, very famous musicians haven’t always had the most naturalistic presence on screen. Performers from Elvis to Cher have dared to cross over into acting in roles that didn’t try to obscure their visibly famous faces, while others like Lady Gaga have opted for more transformational roles.

Regardless of the media storm surrounding the film and dramatically conflicting reports about Styles’ acting prowess (for the record, /Film’s Hoia-Tran Bui says he’s “perfectly fine”), Phillips hopes her costumes only highlight what she sees as a great performance. “I hope it helps suspend belief so they can engage with the work that Harry does,” she says. “I think Harry does a really stellar job in this movie.”

‘Slash Film: Final Destination 6 Directors Zach Lipovsky And Adam B. Stein Got The Job In The Most Unusual Way’