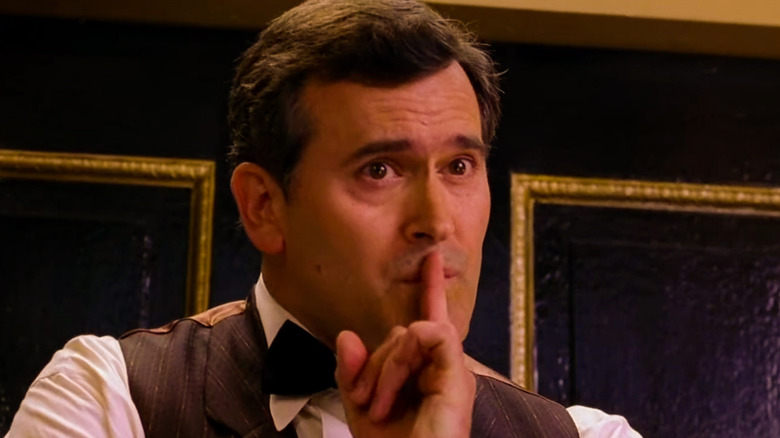 Here’s a well-known film fact among fans of director Sam Raimi’s oeuvre: adding Bruce Campbell to something automatically makes it better. The actor got his start in Raimi’s “The Evil Dead” and has starred in quite a few of his longtime friend’s movies and TV shows since, including most of the “Evil Dead” franchise and stints as the King of Thieves, Autolycus, on the Raimi-produced “Xena: The Warrior Princess” and “Hercules: The Legendary Journeys.” Campbell and Raimi grew up together, making home movies and honing their craft, and as such Raimi has included Campbell cameos in almost all of his productions to honor their decades-long friendship.

It’s no real surprise that he has a cameo in Raimi’s latest, “Doctor Strange in the Multiverse of Madness,” so to celebrate the movie’s upcoming release, I’ve compiled a ranking of Campbell’s greatest Raimi movie cameos. You can catch him mugging it up for his good buddy once more when “Doctor Strange” opens in theaters today, and if not, you’ll always have “Spider-Man.” 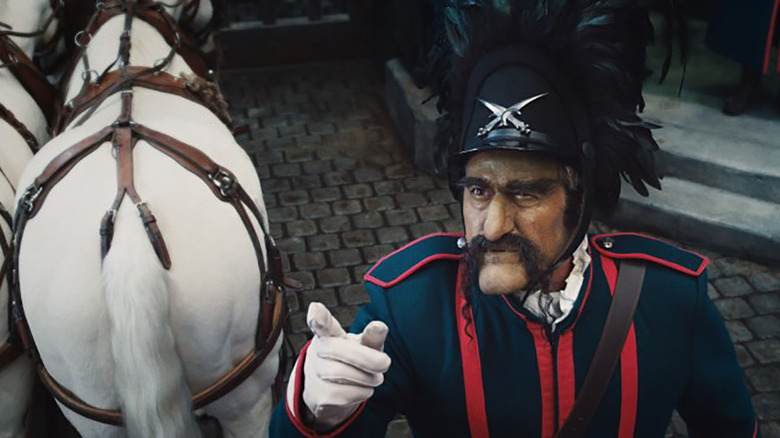 You’d be forgiven for forgetting about Raimi’s “Oz the Great and Powerful,” which followed James Franco as Oz, who eventually goes on to become the guy behind the curtain in “The Wizard of Oz.” The movie features Raimi’s indelible stamp, and there are plenty of great moments, but it’s mostly an odd aside in the director’s career. The Disney sensibilities didn’t really mesh with Raimi’s vision, and the result was a real mess. One bright spot was Campbell, in a blink-and-you’ll-miss-it cameo as one of the Winkie Guard that protects the Emerald City gates. He’s wearing heavy prosthetic makeup (why would you cover that chin?) and a funny mustache, but it’s still unmistakably Campbell. Unfortunately he only has a few lines and doesn’t get to ham it up much, which is why this cameo’s at the very bottom of the list. 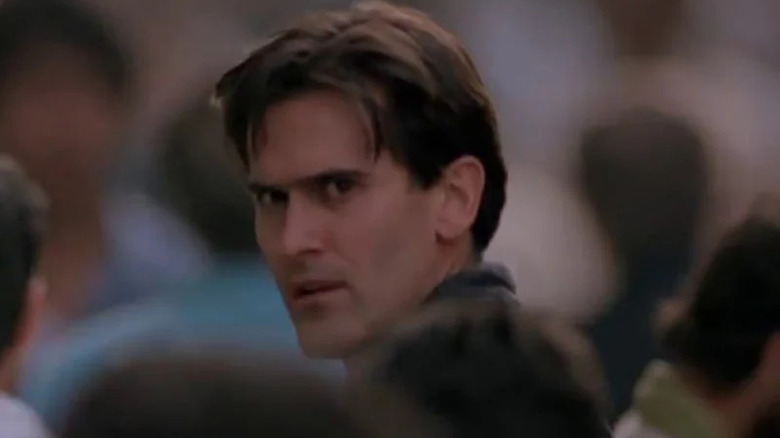 If for some reason you haven’t seen Raimi’s 1990 superhero film “Darkman,” stop whatever you’re doing and get on that. The movie is a gritty, comic-book inspired take on superheroes with no ties to any actual comic book property, starring Liam Neeson as Peyton Westlake, a research scientist who is trying to create skin tissue based on photographs. After his lab is blown up and he’s left horribly disfigured and without pain receptors, he sets out on a path of vigilante justice. Frances McDormand plays his girlfriend, a lawyer who thinks that he died in the explosion and goes looking for her own kind of justice. “Darkman” rules, and it includes another of Campbell’s early cameos in the form of “Final Shemp.” The name refers to Raimi’s “Shemps,” background characters so-called because of “The Three Stooges” actor Shemp Howard, who often played random background roles.

Originally Raimi wanted Campbell to play Westlake/Darkman, but Universal wanted a more recognizable actor in the leading role. Raimi did manage to get Campbell in the role of Darkman in a different way, at least, since the character can eventually take the form of anyone using the synthetic skin. McDormand sees a random man (Campbell) and wonders if he is actually Westlake in disguise at the very end of the film. Campbell explained it to the Hollywood Reporter in 2020:

“We had made ‘Evil Dead 2’ just before that, and I was not enough of a [acting] commodity for Universal. But Liam Neeson at the time, he did a couple of well-known things in Europe, but I don’t think people could have picked him out of a police lineup here. Sam threw me the bone and said, ‘Why don’t you be the final [in disguise] Darkman.’ So, I am Darkman, technically.”

Campbell also provided voice-over work for the movie, helping Raimi out in post-production. He did the voices of nearly every villain that dies, plus he did some overdubbing for Neeson, including the censored television versions of his lines:

“[‘Darkman’] needed lots of looping, lots of sound effects. So I made studio guy money and wound up voicing every criminal who fell to their death. Holy s***, I screamed my brains out. And they’re good, vintage screams. We got to a point where we were mixing and Sam goes, ‘S***, I need Darkman to yell ‘Julie!” And he looks at me and says, ‘Get in the booth.’ So that’s in there. And I did all the television looping for Liam.”

While “Final Shemp” didn’t exactly have any lines, Campbell’s voice-over work and the fact that the character is actually Darkman in disguise makes “Darkman” one of Campbell’s better cameos. 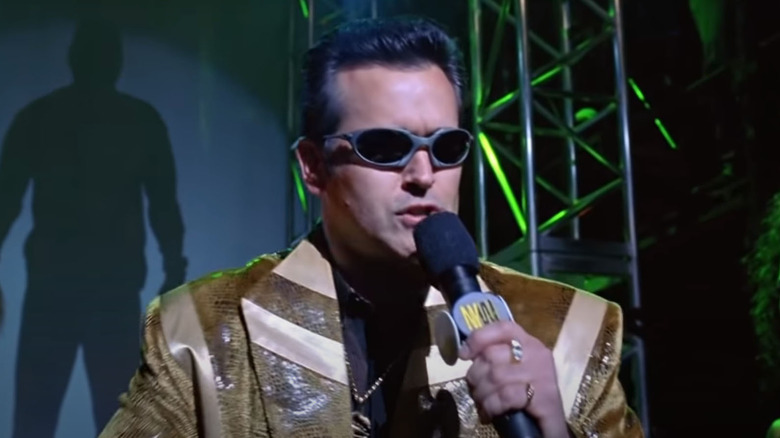 When Raimi got the chance to make “Spider-Man” for Sony, of course he called up his old buddy Campbell to drop by for a cameo. In fact, Campbell has a different cameo in each of Raimi’s “Spider-Man” flicks, and they get progressively better with each entry. In the first “Spider-Man,” Campbell plays a wrestling announcer in a snakeskin jacket and goofy late ’90s Oakleys sunglasses. When he sets out to introduce young Peter Parker (Tobey Maguire) and asks his name, he gets the not-so-cool “The Human Spider.”

Because he’s an announcer and making things sound more interesting is his whole gig, he gives poor Peter a better wrestling name: “The Amazing Spider-Man.” That’s right, in Raimi’s “Spider-Man” universe, Campbell is the one responsible for giving Spidey his moniker. Campbell’s also giving his best Elvis impersonation in the way he announces the wrestler’s entrance, making the whole sequence a lot of fun.

Doctor Strange In The Multiverse Of Madness – Pizza Poppa 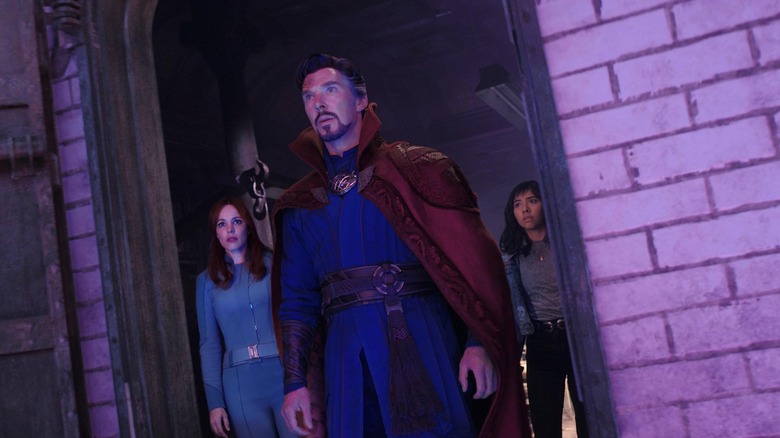 That’s right, Campbell has a cameo in “Doctor Strange in the Multiverse of Madness,” making his first MCU appearance, though the Sony “Spider-Man” movies make it his fourth Marvel outing. He appears in the alternate world, Earth-838 (Earth-616 is the world we know) as a pizza ball salesman, the aptly named Pizza Poppa. What is a pizza ball, you ask? It’s pizza, in a ball. If you can wrap your head around multiverses, you can picture spherical ‘za. Campbell’s salesman gets frustrated when America Chavez (Xochitl Gomez) doesn’t pay for her pizza ball, and he demands that she pay him. He also makes fun of Doctor Strange (Benedict Cumberbatch) and his weird wizard-looking outfit, and I can’t say I blame him. Unfortunately, Strange doesn’t take that too well and casts a spell on him that causes him to beat himself up. Anyone who’s seen “The Evil Dead” knows Campbell is a master at creating a one-man brawl, so it’s pretty perfect. Strange tells Chavez not to worry because the spell will wear off… in two weeks. Ouch.

We don’t see Campbell again until a small post-credits sequence, where he finally stops fighting himself two weeks after encountering Strange and Chavez. It’s such a great Raimi touch, and adds some extra fun to the multiverse-hopping extravaganza. 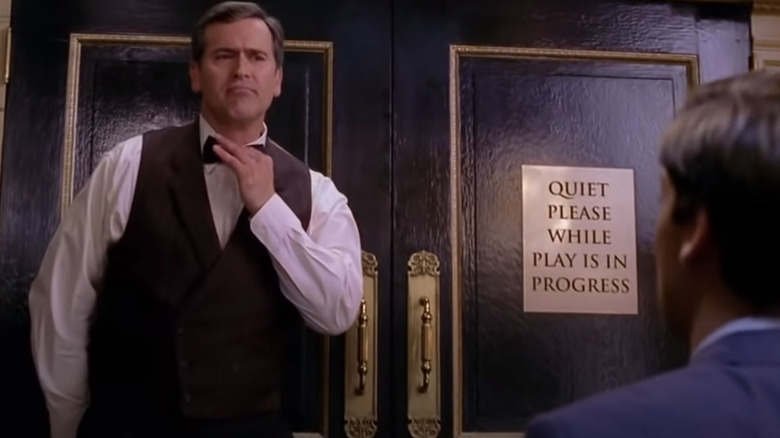 For “Spider-Man 2” in 2004, Raimi upped the ante by giving Campbell a tiny bit more screen-time and significantly more sassy dialogue. He plays an usher outside of the theater where Mary Jane (Kirsten Dunst) is performing in a play, and he corrects poor Peter on his untied shoe and his tie before refusing to let him into the building because he’s missed the play’s start time. “No one will be seated after the doors are closed,” he explains, gesturing to a sign behind him. This guy clearly takes his job a bit too seriously, and he explains to Peter that not letting anyone in after the show starts helps “maintain the illusion” of the play itself. When Peter tries to explain that Mary Jane asked him to be there, Campbell retorts with, “…but not to come late,” and then stands up and crosses his arms. He’s a real jerk and his comedic hand-motions and over-emphasized “zipped-lips” and shushing are pure gold. 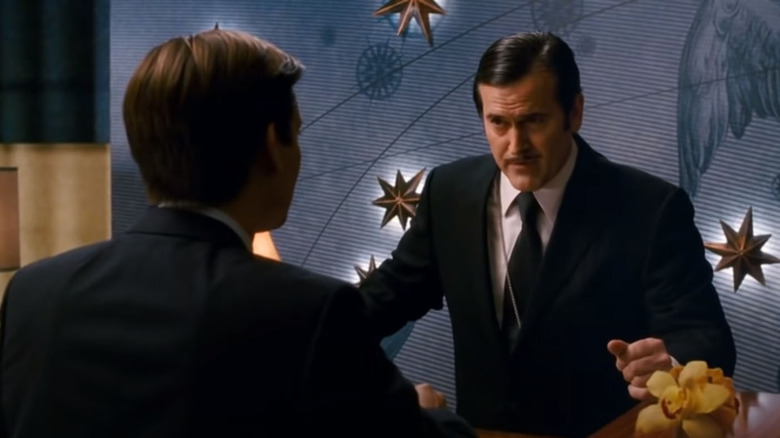 Raimi stepped up the Campbell cameo game even more with “Spider-Man 3,” which is the chiseled chin’s greatest Raimi cameo to date. In the unfairly maligned third film of Raimi’s “Spider-Man” trilogy, Campbell plays a Maître d’ at the fancy restaurant where Peter plans on proposing to Mary Jane. Perhaps as a way to make up for making Campbell totally come between Peter and M.J. in “Spider-Man 2,” Campbell is much more helpful this time around.

He has an amazing, slightly cartoonish French accent that makes Peter’s last name sound like “pecker,” but beyond that he’s actually pretty nice to Peter. He even tries to help him with his proposal to M.J., arranging to bring champagne to the table with the engagement ring in the bottom of her champagne flute. He volunteers to protect the ring with his life, which is a pretty far cry from the usher who wouldn’t even let Peter through a door because of some rules on signs. Unfortunately the proposal doesn’t go as planned when Gwen Stacy (Bryce Dallas Howard) shows up and inspires some feelings of jealousy, causing M.J. to storm out. Oh well, at least he had Campbell on his side for once.

The post Every Bruce Campbell Cameo in a Sam Raimi Movie, Ranked appeared first on /Film.