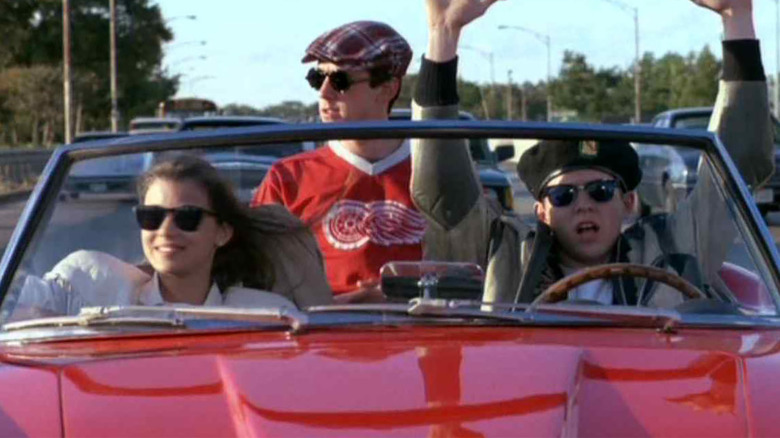 The adult world is insane, and Ferris Bueller knew it.

Idly and amusingly thumbing his nose at authority, Ferris Bueller (Matthew Broderick) had reached a point in his teenage life that he knew exactly how to manipulate the world to his liking. Faking sick had become easy for him, and he would frequently skip school for no other reason than school was a drag. John Hughes, the writer/director of “Ferris Bueller’s Day Off,” was careful to depict Bueller’s public high school as a pit of misery wherein teachers would dully drone kids to sleep. Bueller, aching for stimulation, ditched it all, “borrowed” cars, and went to art museums, baseball games, parades, and fancy restaurants. His suburban wealth insulating him from consequences. Bueller’s evil principal (Jeffrey Jones) and his annoyed sister (Jennifer Grey) were the only ones incensed by his constant flouting of rules.

“Ferris Bueller’s Day Off” became an aspirational classic for teens in 1986 who related to Bueller’s sense of alienation and who admire his temerity. Broderick presented the character with humor and confidence, handily blowing off any criticism of the character’s dubious morals. That he lived a step outside of reality, even addressing the audience directly, certainly helped.

Ferris’ nervous best friend Cameron (Alan Ruck) has an (off-screen) emotionally abusive father who loves his expensive sports car more than his son. The car plays a major part in “Day Off,” and will provide Ferris with stylish transportation and Cameron with emotional catharsis when he destroys it. It’s quintessential ’80s yuppie consumerism undone by Gen-X. The car’s vanity license plate — NRVOUS — is a good thematic tie-in to the film.

It’s also not the only license plate gag in the movie. A close look at a few screengrabs reveals several fun references to other John Hughes movies. 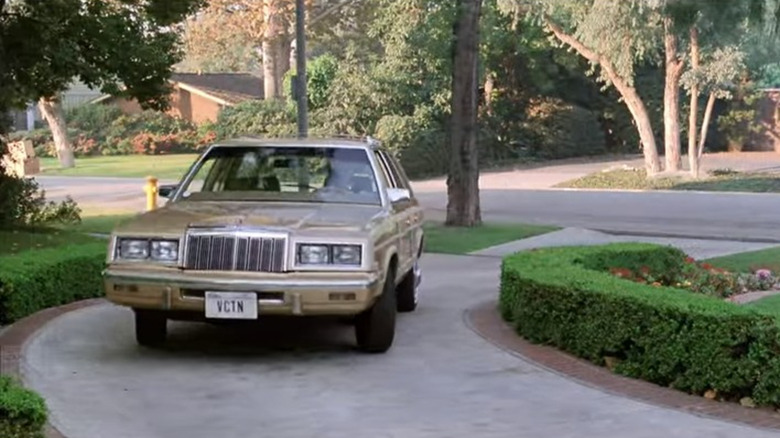 One can thank the resourceful minds at Reddit for rounding these details up, but these bits of trivia have long been known among John Hughes fans.

At 36 minutes and 51 seconds, Bueller’s mother (Cindy Picket) is seen returning home in the suburbs of Chicago. Her beige car bears an Illinois license plate with the letters VCTN.

This is a reference to the 1983 comedy hit “National Lampoon’s Vacation,” directed by Harold Ramis and written by Hughes. That film, set largely in cars, was about the hapless Griswold family and their summer quest to visit a Disneyland-like theme park (actually Six Flags Magic Mountain) on the other side of the country. Like many of Hughes’ movies, “Vacation” was a big enough hit that 1986 audiences might catch the reference. It had, after all, already warranted one sequel with Amy Heckerling’s “National Lampoon’s European Vacation” in 1985. 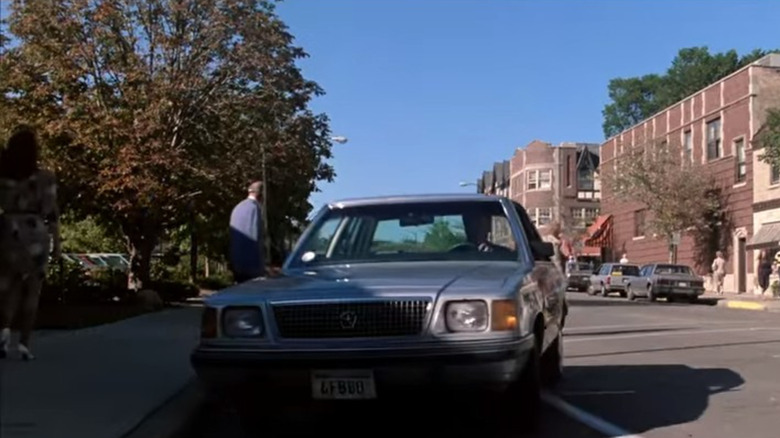 At 47 minutes and 35 seconds, the audiences sees principal Rooney (Jones) leaving his post at his high school to catch his most loathed student skipping school red-handed. Over the course of the movie, Rooney slowly loses his mind, his dignity, and his car in his futile attempts to outwit the teen. Rooney even goes to Bueller’s home to check on him.

When Rooney pulls up in his boxy, boring Dodge, the audience can clearly see a license plate that reads 4FBDO.

This is a car being used “for ‘Ferris Bueller’s Day Off.'” A wink to an audience still in the middle of watching the movie! 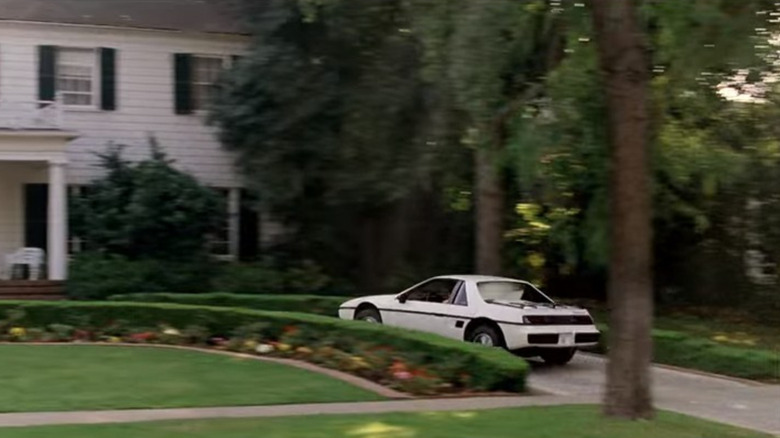 Go to 66 minutes and 30 seconds and run it back a few times.

This one is difficult to see, as the car is moving quickly in the scene and a clear frame of the license plate is elusive. Late in the film, Ferris’ sister Jeannie (Grey), as outraged as Principal Rooney, storms out of school to check to see if Ferris is indeed sick at home, or is faking it, as she knows he is. She finds that Ferris has arranged a mannequin in his bed and arranged his expensive bedroom sound system to synthesize a snore. Later in the film, after an encounter with Charlie Sheen at a police station, Jeannie will have a change of heart and will let Ferris get away with his subterfuge.

This is a reference to “The Breakfast Club,” Hughes’ seminal 1985 teen drama about six archetypal teens discussing life and philosophy while locked in a library for Saturday detention. In that film, teens broke free of their labels and proved themselves to be more complex than the world assumed them to be. Hughes seems eager to set teenagers free. 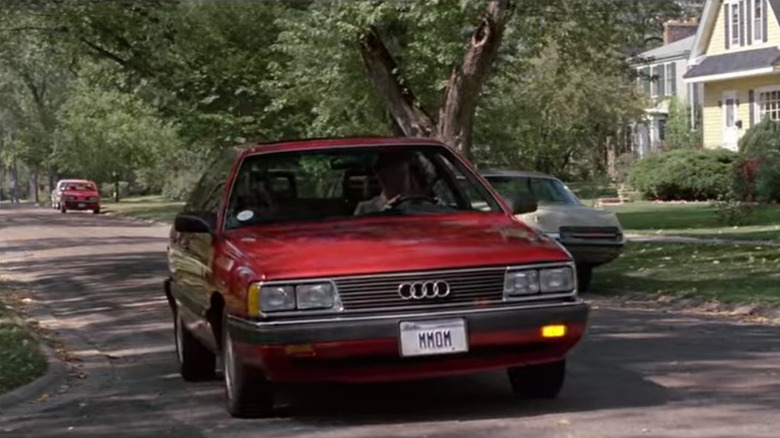 This one can be seen during the film’s climax, at about 91 minutes and 47 seconds in.

Near the end of “Day Off,” Ferris must race home from a distant location, knowing that his sister is driving home at the same time … with mom in the car! He’ll be caught! He’ll have to leap over fences and run across lawns to assure he make it home faster than his sister. To ratchet up the stakes, Ferris’ father (Lyman Ward) will also be casually driving home at the same time.

Ferris’ dad doesn’t play a very large role in “Day Off,” and all we seem to know about him is that he drives a red Audi with the license plate MMOM.

This is a reference to the 1983 Stan Dragoti film “Mr. Mom,” starring Michael Keaton and written by Hughes. “Mr. Mom” has something of a dated premise now: When a blue-collar Detroit auto worker loses his job, his wife kicks off a career in advertising, forcing him to stay home and care for their children for the first time. The comedy is derived from seeing an ill-prepared father attempting to be a “housewife.” It was considered daring in 1983, anyway.

The next time you have yourself a day off, enjoy these little Easter eggs.

The post Every License Plate in Ferris Bueller’s Day Off Has Meaning appeared first on /Film.

A Monster Movie with Brains (Literally): 25 Years of THE RELIC – Daily Dead