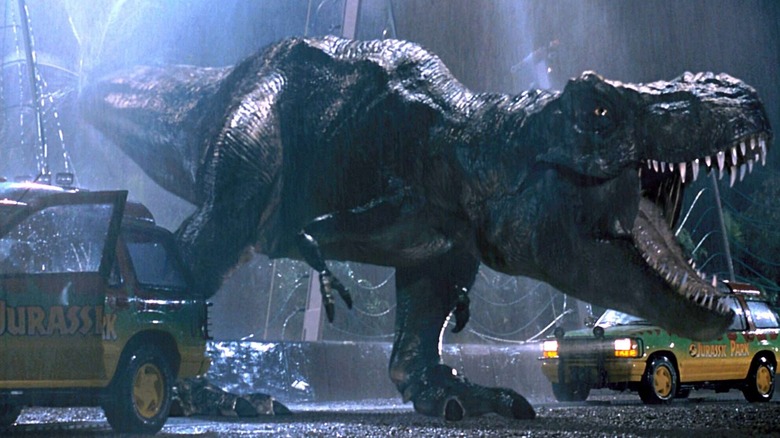 Ask people to identify Steven Spielberg with a specific genre, and you’re unlikely to get an immediate answer. Over his 53-year career, he has excelled as a director of action, adventure, science fiction, fantasy, drama, musicals, and, well, comedy is debatable (though that’s likely a matter of material, as he’s exhibited deft comedic timing in many of his films).

At this stage, Spielberg defies categorization. But when he launched his Hollywood career at Universal Pictures in 1969 under the supervision/protection of Sidney Sheinberg, he proved adept at one genre in particular: horror. From his very first feature-length effort and his first mega-blockbuster to his somber post-2000 oeuvre, Spielberg has turned to tales of terror to both develop and mature his craft.

Scaring the heck out of audiences is his happy place. And when Spielberg is on his horror game, nobody before or since has done it better. 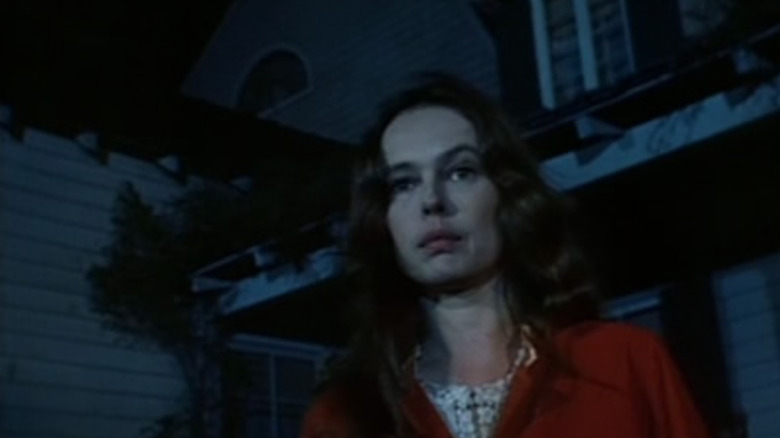 Spielberg’s second TV movie for Universal, “Something Evil,” is a huge step down from the masterful “Duel,” largely due to a slapdash screenplay from “Enter the Dragon” director Robert Clouse. But this haunted property yarn is still worth your time if only for a handful of scares that presage the brain-scarring frights of “Poltergeist.”

Darren McGavin and Sandy Dennis star as married city folk who move their family to a rural Pennsylvania farmhouse. It’s a creepy setup from the jump but grows downright petrifying when Dennis is jarred awake by a shrieking child. When she discovers those shrieks are coming not from her own children, but from the adjacent barn, it’s clear the family’s new digs are home to some kind of malevolent force. The movie never threatens to rise above its movie-of-the-week trappings, but Spielberg capably maintains a sense of low-simmering dread. He also pulls off his first knock-you-on-your-keister jolt with a photograph of glowing eyes peering through a window. 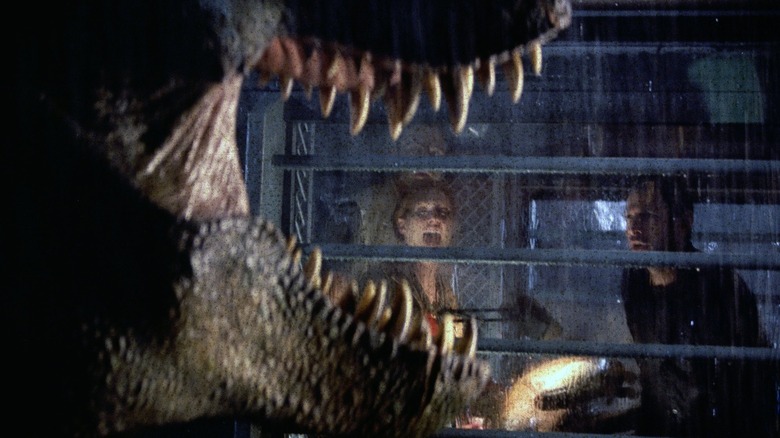 The period between the 1993 release of “Schindler’s List” and 1997’s “The Lost World: Jurassic Park” currently stands as the longest hiatus of Spielberg’s career, and his trip to Isla Sorna is not exactly a roaring return to form. Spielberg can’t lean on the eye-popping novelty of CG dinosaurs to lull the audience into a false sense of security as he did with the first movie, but he nevertheless waits a full hour yet again to loose his money monster on a gaggle of thinly drawn characters.

This time there are two T-Rexes, and once they finally arrive, their destruction of a mobile research facility is expertly staged (especially Julianne Moore attempting to delicately extricate herself from a cracking pane of glass). The raptor attack in the tall grass is equally impressive. But they’re oases of brilliance in a desert of indifferent storytelling. It’s impressive that Spielberg could pull off two top-flight set pieces while on autopilot, but the tedious setup and the ho-hum San Diego finale make it depressingly clear that, as a director, he was done with the dinos. 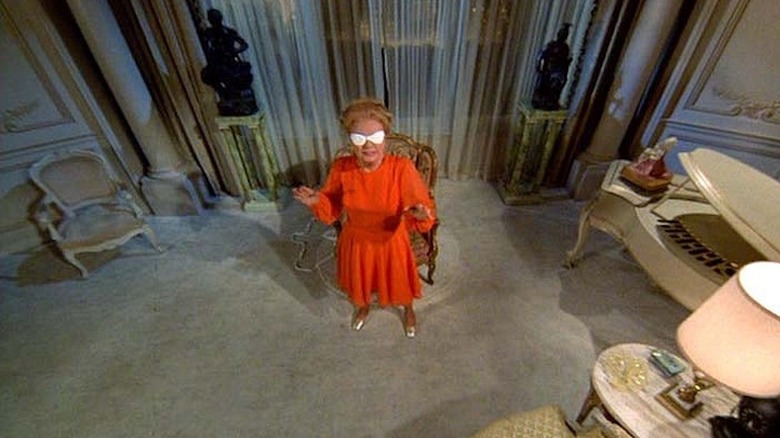 The pairing of a 22-year-old wunderkind and veteran Hollywood diva Joan Crawford went about as well as you’d expect. The shoot might’ve been hell for Spielberg, but the finished product is vintage Serling. Crawford plays a wealthy, horribly cruel blind woman who gets a debt-stricken gambler to sell her his eyes for an experimental procedure that will restore her sight for 11 hours. The moment she unwraps her bandages, there is a blackout. At the exact moment she unwraps her bandages, there is a blackout. Believing her doctor botched the surgery, she flies into a rage that builds to a wickedly satisfying conclusion. Aesthetically, Spielberg mostly colors within the network television lines, but his crackerjack gift for screw-tightening suspense is readily apparent. 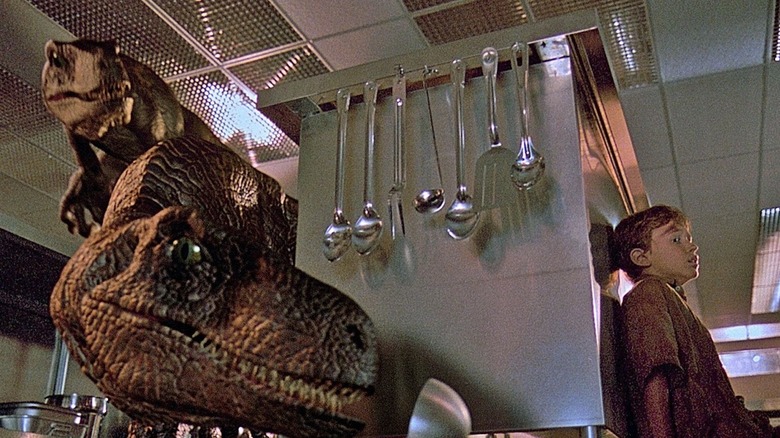 The return of the blockbuster mack. After the critical and commercial disappointments of “Always” and “Hook,” Spielberg took a year off to rediscover his mojo. He wisely went back to basics and emerged with a game-changing blockbuster that wows with its groundbreaking CG imagery, but really drives its hooks in with a terrifying set piece for the ages.

After an hour’s worth of less-than-brisk setup, Spielberg finally gets down to business and unleashes the Tyrannosaurus Rex on the park’s very first tour group. Though the scene has been mimicked and parodied countless times over the last three decades, you still hang on every ominous “thump” until the prehistoric predator par excellence makes her ferocious entrance. At that moment, the characters’ dewy-eyed awe turns to bolt-upright panic.

While our heroes might think their worst fears have been realized, they have yet to make the acquaintance of an uncaged velociraptor. Yes, the T-Rex scene is the showstopper, but the climactic raptor-and-human chase at the park’s main facility takes the unevenly paced film out on a high. 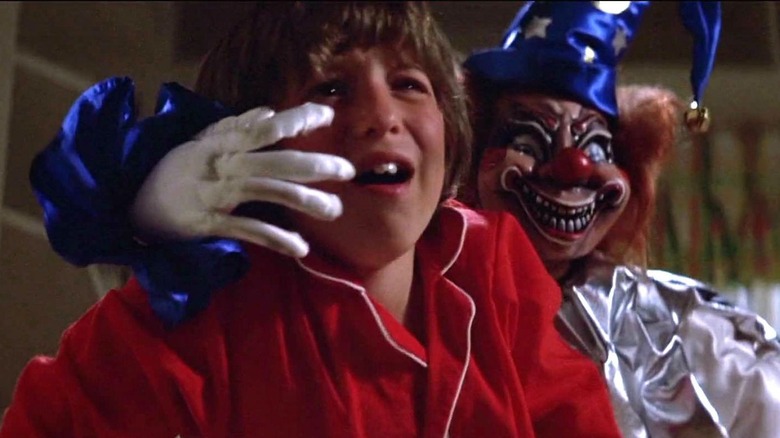 Even if Tobe Hooper directed every scene of “Poltergeist,” the legendary director of “The Texas Chain Saw Massacre” was still, according to producer Frank Marshall, serving the carefully storyboarded vision of Steven Spielberg.

Everything about “Poltergeist,” from its perpetual magic-hour 1980s suburbia to its slow-cranked horror set pieces, is vintage Spielberg. The least Spielbergian element about it is that the family unit is happily functioning. Dad’s alright, mom’s alright, and the kids are adorably screwy. The storm of divorce is nowhere on the horizon or in the rearview. As for those set pieces, they’re pure nightmare machines. Manufacturers of clown dolls must’ve been hit hard, while kids were left wondering if their backyard swimming pool was one bad storm away from becoming a swamp of displaced corpses. Even the great big tree outside your window couldn’t be trusted.

Spielberg did a number on a lot of childhoods with that movie, and he should be immensely proud.

War Of The Worlds 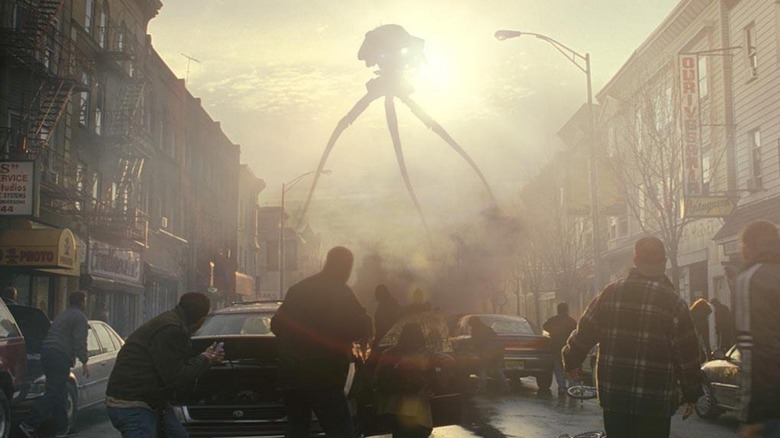 The grumps who turned their noses up at the benevolent aliens of “Close Encounters of the Third Kind” and “E.T. the Extra-Terrestrial” got what they wanted and then some with Spielberg’s horrifying, post-9/11 take on H.G. Wells’ landmark science-fiction novel, “War of the Worlds.”

When the malevolent tripods hit New Jersey, they relentlessly vaporize every living thing in their path. It’s a ferocious sequence. Audiences expecting a fun summer thrill ride had to be shocked when the Spielberg of “Saving Private Ryan” showed up, instead. Amazingly, the Sturm und Drang of the invasion can’t touch the horror of Tom Cruise and Dakota Fanning taking shelter with an increasingly unhinged Tim Robbins. The tripods are an otherworldly evil, but Robbins’ character is an all-too-recognizable representation of what happens to humans when their moral compass gets completely shattered by an unfathomable tragedy. For the sake of his daughter’s life, Cruise must commit an awful, yet wholly pragmatic act.

Spielberg had never gone this hard in one of his big summer releases. Maybe he should go there again because Robbins’ madman isn’t an outlier anymore. There’s a good chance he lives next door. You might be seeing him for Thanksgiving dinner. 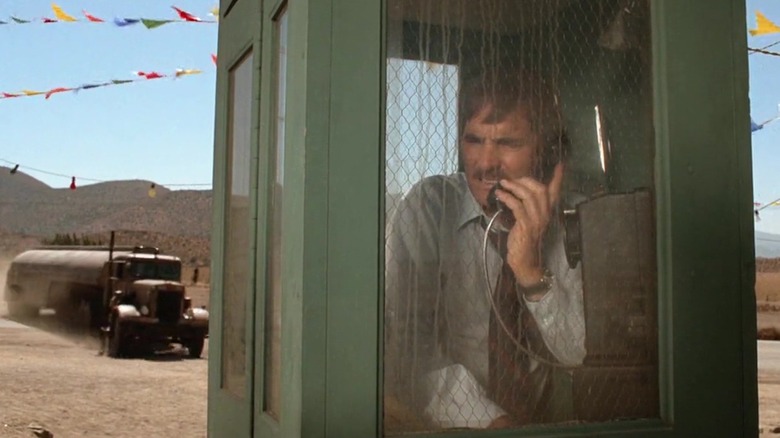 Spielberg’s first TV movie for Universal is a model of ruthless, open-road simplicity. David Mann’s (Dennis Weaver) business trip turns into a hard-driving hell when he innocently passes a slow-driving tanker truck. From that point forward, the unseen trucker hunts David all over the Mojave desert with a single-minded determination to wrap him in twisted steel.

This is Spielberg’s coming-out party as a world-class filmmaker. Despite an ultra-tight production schedule, Spielberg delivers a meticulously crafted thriller worthy of Hitchcock. Spielberg goes nuts with all manner of technique (his depth-of-field genius is put to exhilarating use for the very first time), but he’s not showing off. He’s got a no-frills beaut of a script from the great Richard Matheson and serves the story with the unerring eye of a born filmmaker. Movies don’t get any leaner or meaner than this. 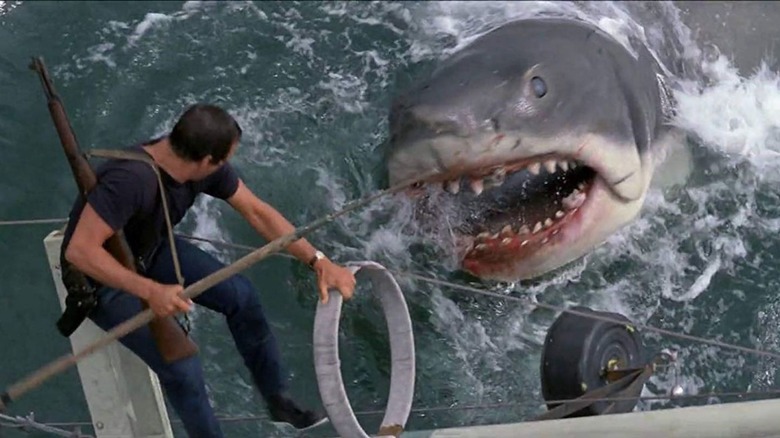 The first official summer blockbuster, and not for nothing, one of the greatest films ever made. Spielberg nearly blew up his career when he chose to shoot his adaptation of Peter Benchley’s bestseller out on the open water of Martha’s Vineyard, but numerous technical setbacks, most notably the malfunctioning mechanical sharks, proved an unintentional boon, forcing the wunderkind to terrify audiences with an unseen beast lurking beneath the glassy surface of the Atlantic Ocean.

When Spielberg finally thrusts his monster on the audience 80 minutes into the movie, he prefaces the scare with a laugh line (“Come down and chum some of this s**t”). Your guard is down, and up comes the toothy grin of a 25-foot great white shark. It’s a big laugh and an even bigger scream. This was a revolutionary gesture in the New Hollywood era of 1975 when horror movies doubled as endurance tests. “The Exorcist,” “The Texas Chain Saw Massacre,” and “Rosemary’s Baby” pushed viewers to the brink before stranding them in uncertainty or straight-up hell.

“Jaws” was a horror movie as a rollercoaster: you were alternately elated and scared to death, but by the end of the film, Spielberg brought you safely back to the station. And you lined up again. And again. You’re probably about to fire it up on streaming right this second. Because the horror of “Jaws” is good for the soul.

Read this next: Ranking Every Ron Howard Feature Film From Worst To Best