What if you suspected that your daughter’s new fiancé was the reincarnation of a man who tried to kill you 30 years ago? That’s the clever and creepy premise behind Evil Eye, a new Blumhouse horror movie that puts South Asian characters and mythology front-and-center.

Directed by twin brother filmmakers Elan Dassani and Rajeev Dassani, Evil Eye is part of the upcoming Welcome to the Blumhouse program, which will see a number of films from diverse filmmakers debut on Amazon this October. And while Blumhouse, the studio behind Get Out, The Invisible Man, and The Purge, has become a household name for genre enthusiasts, this film feels emblematic of the entire initiative: it’s a chance for filmmakers from underserved backgrounds to tell stories unique to their heritage, putting their personal touch on a horror film being presented on one of the biggest platforms in the world.

Based on the Audible Original by Madhuri Shekar, Evil Eye tells the story of Pallavi (Sunita Mani, from Netflix’s GLOW), who has found the perfect man in New Orleans. But when she relays the news to her mother Usha (Sarita Choudhury, Mississippi Masala) back in Delhi, India, a terrifying family secret creeps to the surface. Is Sandeep (Omar Maskati, Unbelievable) the reincarnation of a man from Usha’s dark past?

While the premise may sound downright supernatural to many western viewers, directors Elan Dassani and Rajeev Dassani instantly connected to the material. While they were born in the United States, their Indian mother took this very seriously. Speaking over the phone, Elan explains:

“When either of us dated someone, her first question was always, ‘What day were they born and what time were they born?’ because she wanted to know exactly which moon and which sign to see if we were compatible. I think that there was an instant connection there because that’s an inherent part of the story. The fact that our mother lives in India now, there was that connection as well. This is a story that’s largely phone calls between India and New Orleans, because there’s a lot of that family dynamic.”

However, you don’t have to come from an Indian family to relate to the story of Evil Eye. In the spirit of Blumhouse films like Get Out and The Purge, the film uses horror to explore more familiar and timely elements. Specifically, Evil Eye uses Indian mythology to explore generational trauma. Rajeev says:

“Reincarnation is a very integral part of how we grew up and what we connected to, but I think what was so clever and wonderful about this script is the way [Madhuri Shekar] integrated into this thriller story and making it about a past trauma coming back to haunt you today. We just thought it was such a clever way to use what we’d grown up with, but tell a very propulsive, amazing thriller using it.”

Of course, telling a story so deeply rooted in a specific culture gave Elan and Rajeev a unique opportunity: they could put South Asian actors front-and-center in the middle of a horror movie being distributed on Amazon. “Often in Hollywood when you’re pitching projects, there’s a sense of, is it castable? Can you get this lead or that lead?” Elan says. “It was wonderful to say, ‘Let’s go after all this amazing Indian talent.’ Our stars are some of the, honestly, best Indian-American actors working today.”

Also unique: a lead character who is an older Indian woman, unusual in both Hollywood and Indian films alike. “It was nice to take this matriarch who, in the past, has often been used as a side character, but to give them their own history and to make these characters who are American and give them a background, was a fun challenge,” Rajeev says.

Elan adds, “It’s very rare that the overbearing Indian mom has a violent, sexual, fascinating past that comes back to haunt her. It’s wonderful to play the complexity – she’s an actual woman, and these are real people with real backgrounds.”

But as a Blumhouse movie, Evil Eye needs to deliver what audiences expect: scares, thrills, chills, and what-have-you. Elan and Rajeev both list a number of modern films as influences, including Insidious, Unsane, and The Babadook, movies about “women who are being questioned about their sanity,” Elan says. Rajeev goes a bit more old school, citing “films about obsession” like Psycho and Vertigo, his all-time favorite film.

Evil Eye will arrive on Amazon Prime on October 13, 2020, alongside three other Welcome to the Blumhouse films.

At home in Delhi, India, proud parent Usha Khatri (Sarita Choudhury) is overjoyed when her daughter Pallavi (Sunita Mani) calls from New Orleans with news she has met someone special. But as Usha learns more about Pallavi’s wealthy boyfriend Sandeep (Omar Maskati), she becomes convinced something more nefarious than chance brought the young couple together. When Pallavi announces her engagement to Sandeep, mother and daughter are forced to confront dark family secrets and a terrifying supernatural force in this stylish psychological thriller. 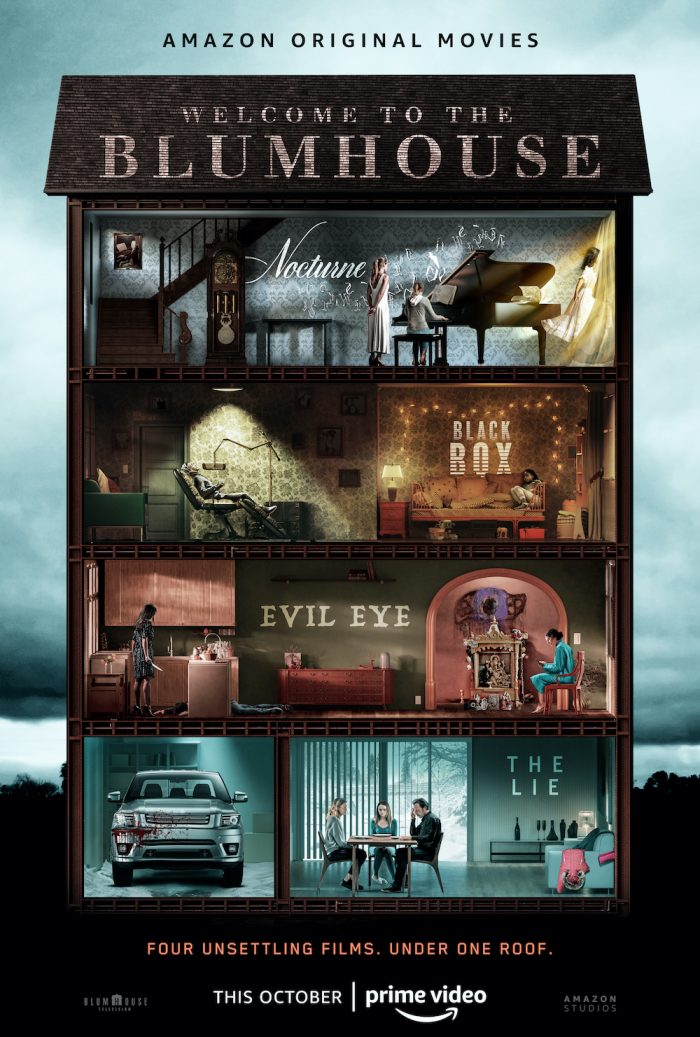 A subtle thought that is in error may yet give rise to fruitful inquiry that can establish truths of great value.