Unmatched, the board game series where characters from myth, legend, literature, and pop culture all clash in the nerdiest battle of all time, is heading to Sunnydale. Unmatched: Buffy the Vampire Slayer is a standalone game that lets players fight it out as Buffy, Willow, Angel, and Spike using detailed miniatures and cards featuring stunning artwork from Heather Vaughan. And naturally, it can be combined with past editions, so the Slayer and her crew can take on Bigfoot, Bruce Lee, and yes, even Dracula.

/Film is pleased to debut an exclusive first look at the game components. We’re even more pleased to reveal that the game is available for purchase online right now before hitting retail shelves in mid-November.

Designed by Justin D. Jacobson and Rob Daviau, Unmatched: Buffy the Vampire Slayer looks to follow in the footsteps of past editions of Unmatched by offering a game that is simple to learn, but infinitely deep in its tactical options. And like past versions, this one looks like it’ll be a blast to play on its own, but will truly shine when you start mixing it with other boxes. I can’t wait for Buffy and Angel to take on the Victorian-era monsters from Unmatched: Cobble and Fog. And can Spike survive the raptors from Jurassic Park? And look, who doesn’t want to see Willow magic her way out of a duel with King Arthur?

Also like past editions, this box features stunning miniatures and vibrant art that really brings the action on the board and in the your hand of cards to life. Restoration Games and Mondo really are a match made in gaming heaven – the former knows to design and balance a board game with the best of them and the latter makes it all look incredible when spread across your table. 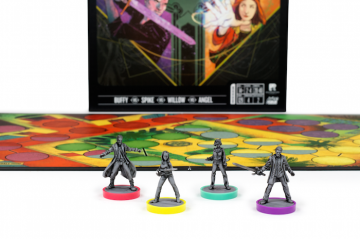 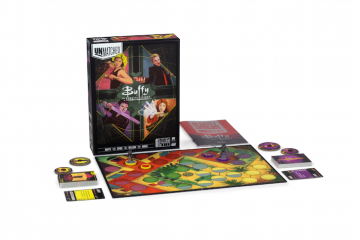 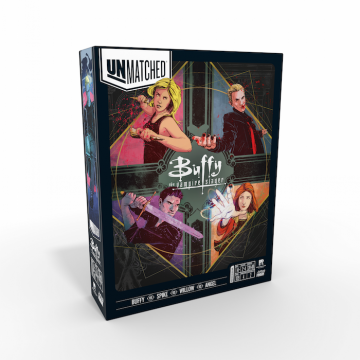 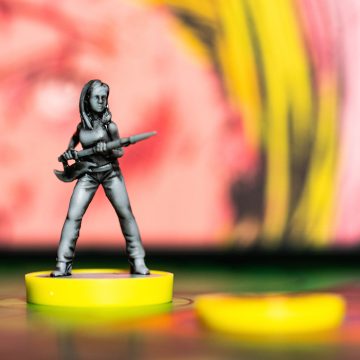 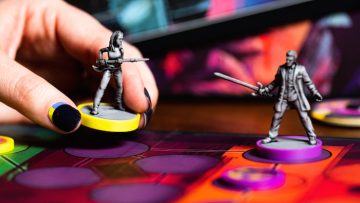 In addition to the four main playable characters, there are a number of sidekicks who can join the fray. Buffy can team up with her wise mentor Giles or her perfectly average friend Xander; Angel forms a dynamic duo with rogue vampire slayer Faith; Spike can rekindle his relationship with his unhinged partner-in-vampirism Drusilla; naturally, Willow is paired up with Tara, the love of her life.

As for the battlefield itself, the double-sided board offers two options: Sunnydale High or The Bronze nightclub, both familiar to fans of the show and both locations where Buffy and her crew have staked more vamps than you can count. 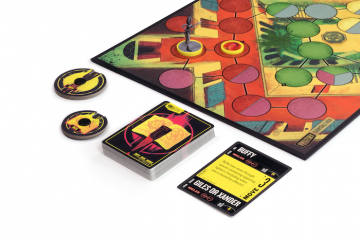 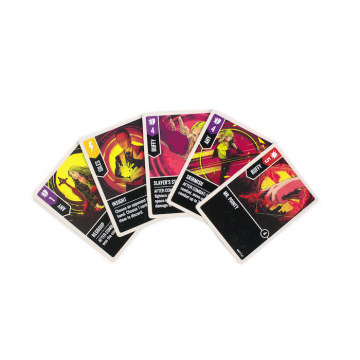 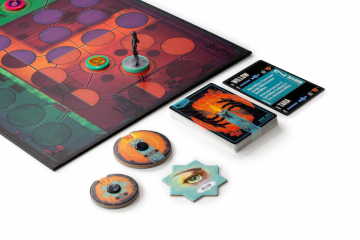 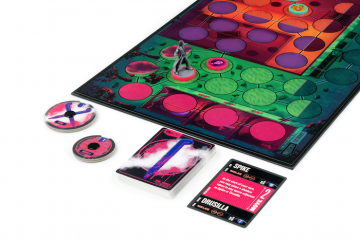 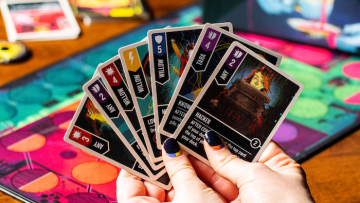 Like past editions, each character also plays differently, allowing for asymmetrical gameplay and the clash of very different strategies. For example, Willow can transform into “Dark Willow” when she or Tara takes damage and Spike has access to ominously named “Shadow Tokens.” As Mondo’s official release describes:

Sidekick selection isn’t the only new feature of the game. When Willow or Tara take damage in battle, Willow will undergo a transformation into Dark Willow, unlocking special card effects that must be resolved during play until she is adjacent to Tara next and changes back. Both Spike and Willow’s decks contain cards that implement a Blind Boost ability dictated by a deck-draw, and Spike’s strategically placed Shadow tokens on the board which trigger enhancements to several of his cards.

As someone who has been playing a lot of games while in quarantine, I can vouch for Unmatched as one of the modern greats. Even with two players, it’s a rich experience that’s simple without being simplistic and deep without being muddled or confusing. And if you’re a Buffy fan, this may be the perfect place to jump in.

Unmatched: Buffy the Vampire Slayer is available on the Mondo site right now for $50. It will hit other retailers in mid-November.

The post First Look: ‘Unmatched: Buffy the Vampire’ Slayer Brings One of the Greatest TV Shows of All Time to Your Table – and It’s Available Right Now appeared first on /Film.