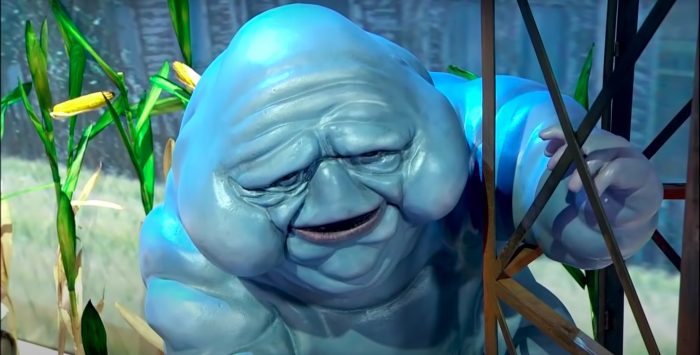 There’s bound to be a bunch of new ghost characters in Ghostbusters: Afterlife, but we only saw one for a split second in the trailer. Now, our first detailed look at this new creepy critter comes by unconventional means, via a recent episode of….MasterChef Junior: Spain?

12 months of a devastating pandemic have resulted in some strange first look reveals, as cross-promotional tie-ins start to filter through before the major movies themselves can actually make their way to theaters. Ghostbusters: Afterlife is the latest victim of these strange circumstances. Ghostbusters News spotted the slimy new specter that will terrorize the kids of Summerville, Oklahoma in Ghostbusters: Afterlife in a recent episode of MasterChef Junior in Spain, where a Ghostbusters-themed episode brought a pool of blue slime and life-sized replicas of the Ecto-1 to the set. And, of course, the new ghost named Muncher.

A blue blob-like monster with six limbs and an uncanny resemblance to Slimer from 1984’s Ghostbusters, Muncher looks slightly more friendly than the original Ghostbusters monster, but no less gross. While we don’t have a look at Muncher in action in the film, there are several good full-body shots of the ghost in the episode (along with lots of kids playing in slime).

Watch the full segment on MasterChef Junior: Spain below (the full-body shot shows up at 0:38):

Muncher already has another promotional tie-in with Hostess, which is launching a line of Twinkies inspired by the blue ghost. The new Ghostbuster Muncher Madness Twinkies consists of golden sponge cake with a blue fruit-flavored creamy filling. Each box consists of 10 individually wrapped cakes.

“Hostess Ghostbusters Twinkies need no introduction. Live Your Mostess with one sweet bite at a time of creamy, cakey, golden goodness. These treats aren’t just for dessert. They’re perfect for picking up on your way out the door, or grabbing one to enjoy a quiet moment,” the description says.

But it will be a little while longer before you can munch on your Muncher-inspired Twinkies while watching Ghostbusters. Afterlife. The long-delayed film is due to hit theaters this July, but that release date is still up in the air considering the current state of the pandemic.

Here is the synopsis for Ghostbusters: Afterlife:

When a single mom and her two kids arrive in a small town, they begin to discover their connection to the original ghostbusters and the secret legacy their grandfather left behind.

Ghostbusters: Afterlife is currently slated for release on June 11, 2021.