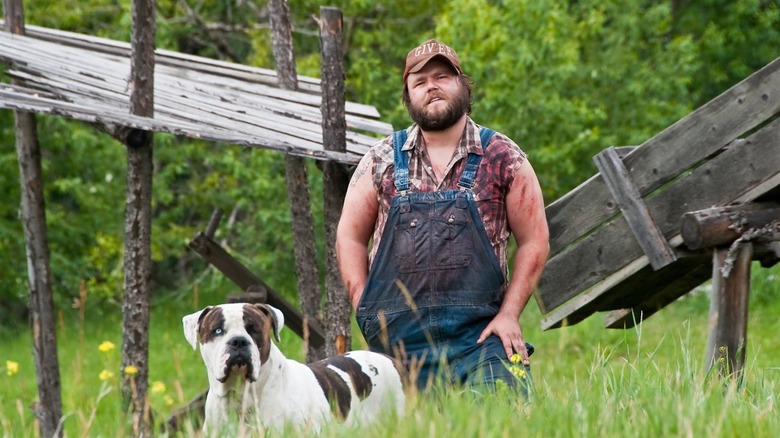 Dogs! They’re man’s best friends for a reason. They’re friendly, loving, playful, and usually have good instincts on whether or not someone can be trusted. Unfortunately, dogs are also often targeted in horror movies as either victims or killers.

As both a horror fan and a dog owner, it actually makes me quite sad when dogs end up dying in films. Human deaths I can withstand … for the most part But dogs and other animals? Here come the waterworks! I know I’m not alone in this, either, as websites such as Does The Dog Die exist to warn others about whether an animal dies or is abused in a movie.

This emotional reaction is why I love when a horror movie introduces a furry friend and lets them survive. It does not matter to me whether they are kept at peace for the rest of the movie or actively take part in the action, a horror film automatically gets a thumbs up from me if the dog survives. If you are the same way and want to watch a good horror flick where the dog lives to the end, you’re in the right place. 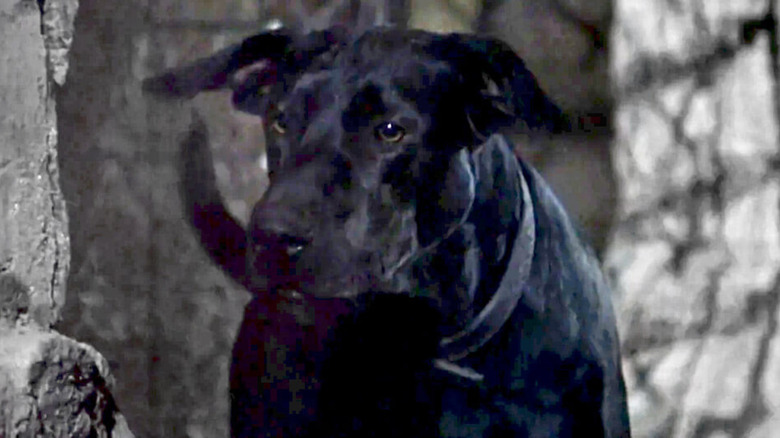 Let’s get this out of the way right now; this specifically refers to the original “Amityville Horror,” released in 1979. What kind of cruel person would I be if I was discussing the 2005 remake, where the dog actually does die?

Anyways, Harry is the Lutz family’s good boy and is having trouble getting used to the eeriness of his new home. He keeps barking at nothing, irritating his family. However, the family themselves start to realize along with Harry that something is terribly wrong with their new house. Turns out, their house was the victim of the very poorly-aged “built on a Native burial ground” trope. Oh, and a guy killed his entire family in it a year earlier. In the film’s climax, Harry faces certain danger when at the last minute, family patriarch George (James Brolin) returns to the house to save him.

This Labrador-pitbull mix was not only helpful in signaling serious danger within the house, he’s also flat-out adorable. I mean, look at that face! Harry is living proof that dogs probably know and see more than we humans do, however, so perhaps we should take them more seriously when they bark at what seems like nothing. 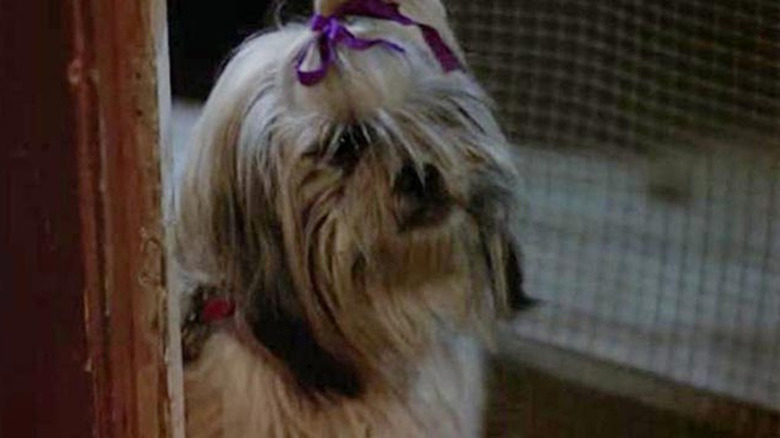 Okay, so this entry is a bit of a cheat, as there is a dead dog in “Friday the 13th Part II.” But it isn’t the main dog character, and that should at least count for something.

One of the movie’s counselors, Terry (Kirsten Baker), brings along her shih tzu named Muffin to get ready for a new camping season at Packanack Lodge. While she isn’t getting the camp ready for opening, Terry is making sure that Muffin is comfortable and happy. That quest appears thwarted upon the discovery of a shih tzu corpse, although it’s revealed to be an entirely different dog and not Muffin. Terry does get murdered by Jason Voorhees, though.

While the “Friday the 13th” franchise is an undisputed classic in the horror genre, the first film is fairly divisive among fans. The kills are great and Betsy Palmer’s performance as the murderous Pamela Voorhees is iconic, but it’s arguably the most meandering and slowly-paced film of the franchise. “Friday the 13th Part II” kicked the budding series into high gear, introducing a stronger, resurrected Jason Voorhees and increasing the rate of kills. Depending on who you ask, “Part II” did a great service to the rest of the franchise, partially because of Muffin’s inclusion and subsequent survival. 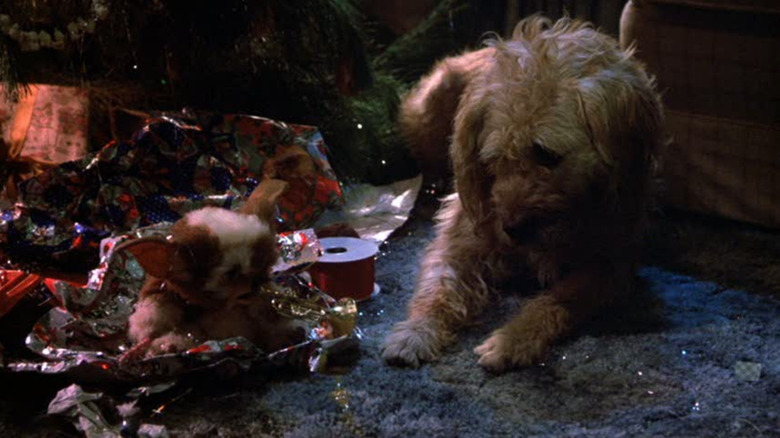 The debate over whether “Gremlins” should be considered a horror movie must be put aside for this list, and not just because it’s clearly meant to be gateway horror for kids (do not argue with me on this). It’s because the film features an adorable dog named Barney, played by canine actor Mushroom, that doesn’t get killed by the Mogwai army trying to become gremlins.

Barney is immediately shown to be a pesky dog after Mrs. Deagle (Polly Holliday) accuses him of breaking a plastic snowman, vowing revenge on the dog and his owner Billy Peltzer (Zach Galligan). When Gizmo the gremlin enters the lives of the Peltzers, Barney takes a liking to the little guy, with Gizmo calling him “Woof-Woof.” Unfortunately, Barney ends up being the scapegoat for various mischievous acts committed by the other Mogwai, but is eventually vindicated during the final confrontation between Gizmo, Billy, and the Mogwai leader Stripe.

No matter your opinions about the horror status of “Gremlins,” you can’t deny that Barney is a very good boy who did no harm. Well, at least no harm that wasn’t deserved, because Mrs. Deagle really was a piece of work. 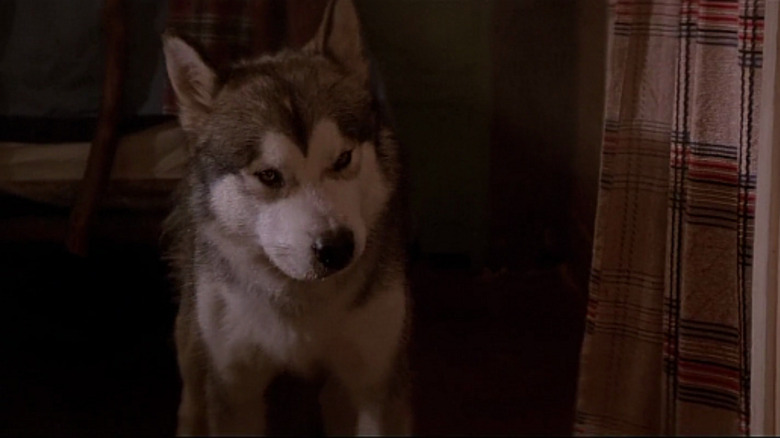 You’ve read about dogs sensing paranormal hauntings, now get ready for dogs sensing vampires. Nanook, the Alaskan Malamute belonging to the Emerson brothers in “The Lost Boys,” is arguably one of the best dogs to appear in any horror film. Better yet, he doesn’t get killed or even severely injured!

Although he loves both brothers equally, Nanook has a particular attachment to Sam (Corey Haim). This attachment is why he attempted to bite Michael (Jason Patric) after he sensed that there was something terribly wrong with the older Emerson brother. Terribly wrong in the sense that he was in the process of turning into a vampire, thanks to his new clique of so-called friends, led by the enigmatic David (Kiefer Sutherland). He is able to stay out of harm’s way for the majority of the movie until he must save the brothers’ lives by pushing the vampire Paul (Brooke McCarter) into a bath of holy water and garlic.

If you are anything like me, then vampires and dogs are probably also two of your favorite things. “The Lost Boys” is not only a classic because it’s a poignant coming-of-age story with vampires, but because of the heroics of Nanook, a dog that was too good for this world. 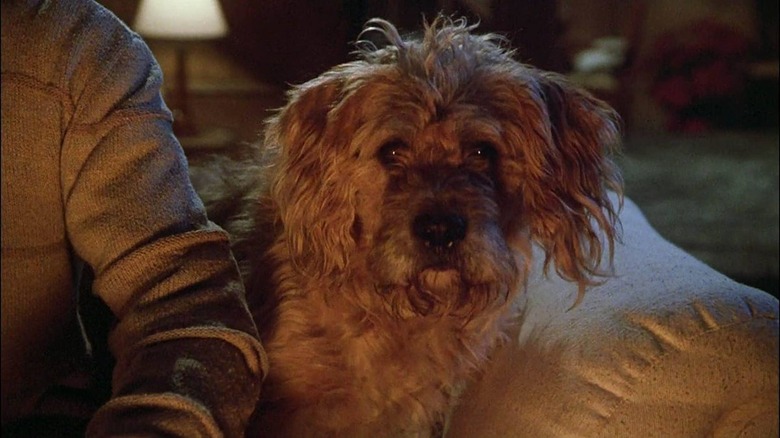 Unfortunately, Gypsy was Mushroom’s second and final film role, and he doesn’t get as much screen time as he got playing Barney. Nevertheless, it is still fun to see him on screen, looking adorable and avoiding the wrath of the demonic Pumpkinhead spirit. He does inadvertently cause the demon to be unleashed in the first place, due to his involvement in the string of events that led to the death of Billy Harley (Matthew Hurley).

But hey, Gypsy doesn’t get hurt at the hands of either Pumpkinhead or any other evil being in the movie. For that alone, he deserves to be on this list, despite his limited role. 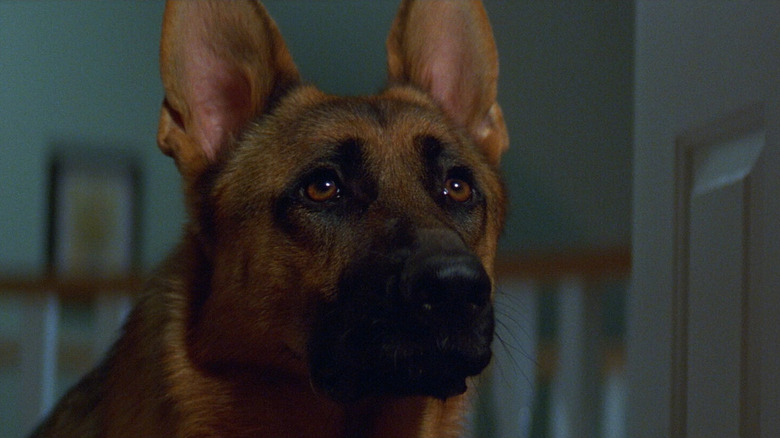 German shepherd Thor is living the life with his owners, mother Janet (Mariel Hemingway) and son Brett (Mason Gamble). That bliss comes to an end when Janet’s brother Ted (Michael Paré) moves in. Thor and Brett are suspicious of Ted off the bat, and rightfully so; he was turned into a werewolf while working on an expedition in Nepal and has begun killing people now that he’s back stateside. Despite showing remorse for the killings he caused, he’ll end up doing anything in order to ensure his tracks aren’t uncovered. Ultimately, it’s up to Thor to protect his owners from danger, even if he has to escape the pound to do so.

“Bad Moon” admittedly has an identity crisis, where it seems just a bit too ashamed of the fact that it should center around a dog and instead focuses a lot on the werewolf. However, there is still a lot of charm to the movie, especially since Thor is just too cute. Also, the climactic canine vs. lycan fight. How can you go wrong?

Dawn Of The Dead — Chips The Border Collie 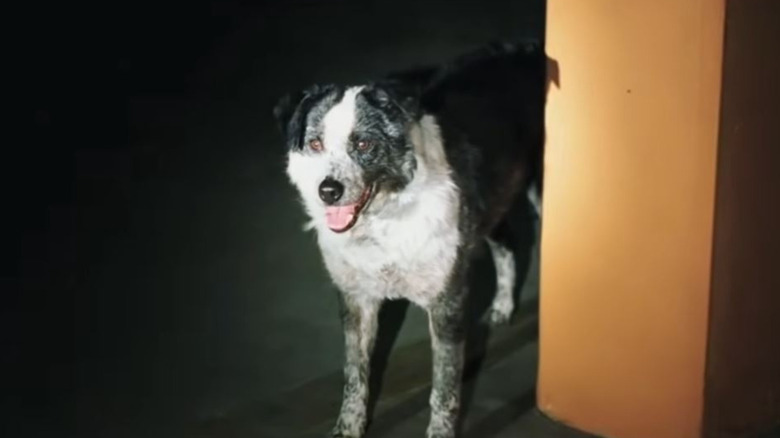 Zombie media is always dodgy when it comes to the safety of pets. After all, these monstrous undead beings are often depicted as hungry for anything, whether human or animal. Believe me, that scene in the pilot episode of “The Walking Dead” involving the trapped horse still makes me anxious.

Zack Snyder’s 2004 remake of “Dawn of the Dead” posited an interesting idea: what if zombies were specifically cognizant of humans and no other living creature? This concept introduced us to Chips, a lovable and intelligent stray dog who becomes an important part of the remake’s band of survivors. He is able to weave through massive hordes of zombies without them registering a thing, helping to rescue other survivors and retrieve supplies. Even when that tropical bummer of a mid-credits ending rolls around, we can take comfort in knowing that at least Chips wasn’t doomed to be eaten by zombies.

Surprisingly, dogs weren’t always supposed to be unaffected by the zombie apocalypse. One idea that was considered but ultimately not used was zombie dogs (via Chud). Thankfully, we’re in a better timeline, as people still fawn over Chips and debate over why the zombies in “Dawn of the Dead” don’t recognize dogs to this day. 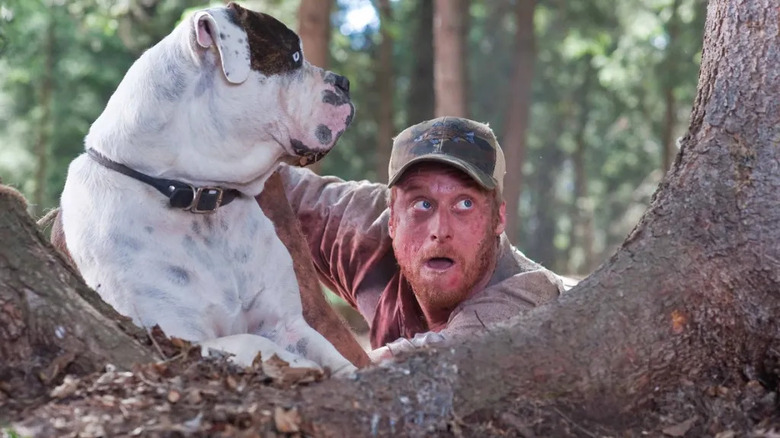 “Tucker & Dale vs. Evil” is a horror-comedy staple for several reasons, one of them being the one-eyed American bulldog Jangers. This adorable bulldog is the other companion of Dale (Tyler Labine) and was played by a canine actor aptly named Weezer. Say it ain’t so.

Jangers tags along with Dale and his best friend Tucker (Alan Tudyk) to the vacation home the duo purchased in the woods. Also occupying the woods are a group of preppy college students, the majority of whom have convinced themselves that Tucker and Dale are out to kill them. This paranoia eventually leads to the group taking Jangers hostage and threatening to kill him, resulting in Dale having to beg them to save his second-best friend. Thankfully, this adorable dog is saved before being hurt at the hands of the deranged Chad (Jesse Moss).

While Jangers doesn’t get involved in any of the film’s deaths, it is still heartening that he was able to survive, especially given how heartbreakingly relatable that scene of Dale begging for his life is to all pet owners. After all, who wouldn’t be willing to sacrifice themselves in order to save their pets? 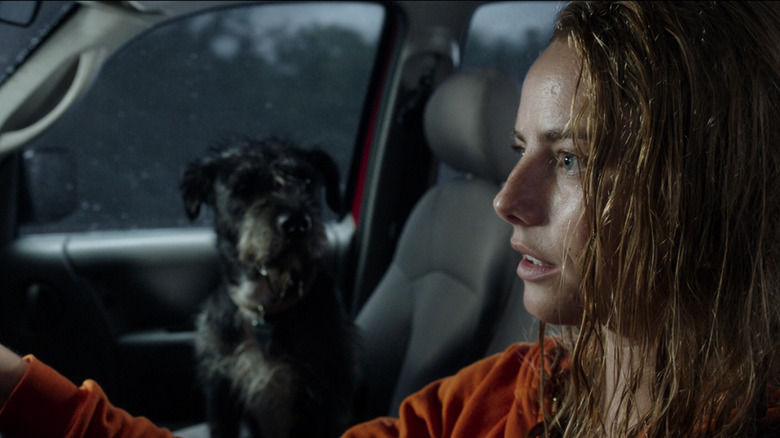 A cute dog in a movie where the main villains are hungry alligators? In any other movie, the dog would probably end up gator food, but not in “Crawl.” Not only does Sugar — the shaggy terrier star of Alexandre Aja’s film — survive, he actually becomes a key player in the central family’s struggle to avoid being eaten.

College swimmer Haley (Kaya Scodelario) returns to her hometown in order to ensure her estranged father Dave (Barry Pepper) is safe as a Category 5 hurricane approaches. There, she finds the adorable Sugar, but Dave is quickly injured by a growing horde of alligators. With help from Sugar, Haley and Dave are eventually able to fight off the gators, resulting in the rare horror movie where none of the main characters die.

It should also be noted that Haley swims for the University of Florida, home of the Gators. Hah.

It cannot be overstated just how important Sugar becomes in “Crawl.” This dog is obviously extremely scared, but it’s still loyal enough to briefly distract the alligators and play dead so they don’t suspect a thing. If there’s any dog that deserves to survive a horror movie, it’s Sugar. Although honestly, all dogs should be guaranteed safety at all times.

Read this next: The Saddest Character Deaths In Horror History

‘Coming Soon: Dragon’s Dogma 2 Revealed, Will Use RE Engine’

‘Slash Film: How Video Game Engines Are Changing The Way Animation Is Made [Annecy]’