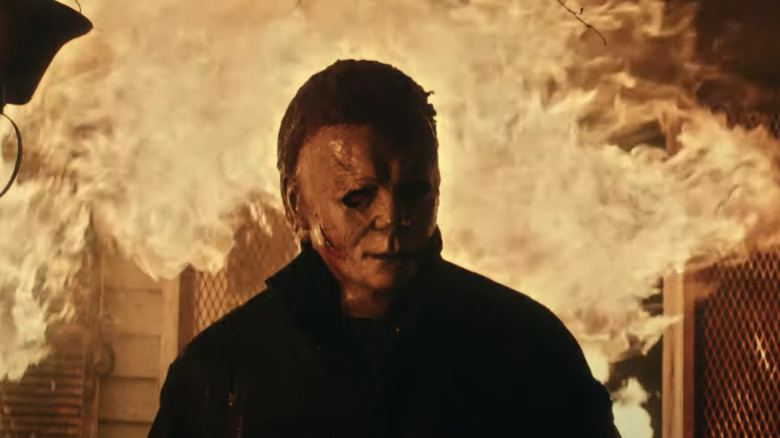 “There’s going to be a blood spurt from there, do what you will with that information,” warns a crewmember.

It’s another day on the set of “Halloween Kills,” the sequel to David Gordon Green’s 2018 slasher, “Halloween,” itself a direct sequel to John Carpenter’s classic 1978 horror film of the same name. The movie made a killing at the box office, cleaning up with over $255 million and shooting to the top of the charts as the highest-grossing entry in the entire franchise. The ground is fertile for a sequel, and after two trailers, several clips, and a ton of featurettes looking towards a “Halloween Kills” October release, Universal is bringing the hype train around again to show us how stunt-o-riffic this movie is. The video came via the film’s official Twitter account along with the caption, “Director David Gordon Green takes us into the flames behind #HalloweenKills.”

Here is the synopsis, per Universal:

Minutes after Laurie Strode (Curtis), her daughter Karen (Judy Greer) and granddaughter Allyson (Andi Matichak) left masked monster Michael Myers caged and burning in Laurie’s basement, Laurie is rushed to the hospital with life-threatening injuries, believing she finally killed her lifelong tormentor.But when Michael manages to free himself from Laurie’s trap, his ritual bloodbath resumes. As Laurie fights her pain and prepares to defend herself against him, she inspires all of Haddonfield to rise up against their unstoppable monster. The Strode women join a group of other survivors of Michael’s first rampage who decide to take matters into their own hands, forming a vigilante mob that sets out to hunt Michael down, once and for all.Evil dies tonight.

At the end of “Halloween” (2018), Laurie Strode (Jamie Lee Curtis), bookended by two more generations of Strode women (Judi Greer and Andi Matichak), sit in the back of a truck, having barely escaped with their lives after going toe-to-toe with Michael Myers (played by James Jude Courtney, with Nick Castle reprising the role for a few scenes, as well). Laurie constructs a funhouse of snare traps, and the women successfully lock Myers in the basement before it ignites. Despite Laurie’s pleas to “let it burn,” firefighters have a job to do. They go to put out the fire and find The Shape waiting for them, a task David Gordon Green did not anticipate the logistics of while penning the story with Danny McBride and Scott Teems.

Early in the sequel, we’re supposed to see how Myers evaded death once again; how did they pull that fiery inferno off?

According to Green in the featurette, it involves hay bales, diesel fuels, and a whole lot of setup. In keeping with Green’s promise to bring forth a bigger, nastier sequel, a crewmember is seen in the video coordinating the scene and gently asserting, “We gotta make it more dirty and more f*cked up.” It’ll be fun to see a firefighter massacre scene since slasher movies often save their mass slayings for hospital staff or cops.

It’s a decision that has caught some static; MovieWeb reports a petition from a “soon to be firefighter” circling on Change.org, calling for the removal of the scene. Call me a desensitized cynic, but I don’t think that footage is going anywhere, not from the same franchise that added a death-by-thumb kill in its fourth entry in order to be less soft (with special effects artist John Carl Buechler, no less). Still, no such thing as negative publicity when it comes to horror pictures.

The post Halloween Kills Featurette Explores How You Burn a House Down appeared first on /Film.